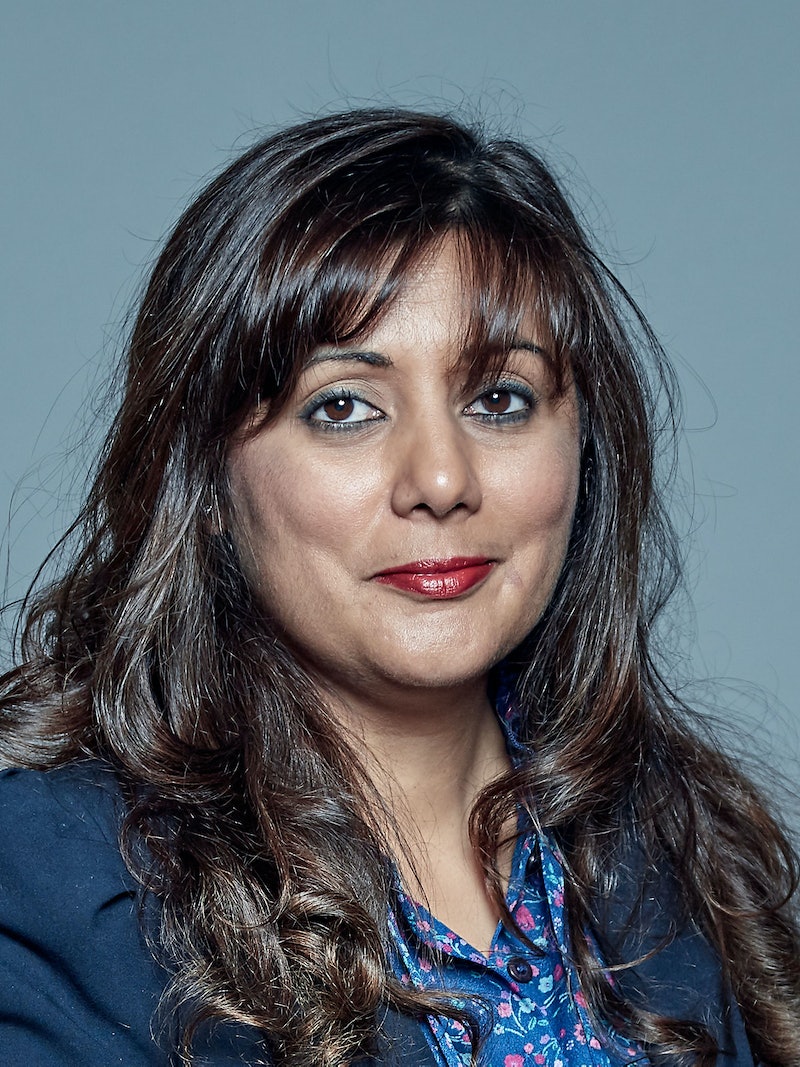 The pressure is mounting on Boris Johnson’s government as they face new claims of discrimination and Islamophobia in the Conservative party. Nusrat Ghani, the first Muslim woman to be elected as a Tory MP was suddenly sacked as a minister two years ago with no explanation, and in a new interview with The Sunday Times Ghani now claims that she was dismissed from her role as a Transport Minister because of her faith.

Now, the Prime Minister has announced a formal inquiry by the Cabinet Office as the government braces for the results of a separate investigation into claims that Downing Street held parties while the country was under strict lockdown restrictions. Here’s a primer on everything that’s gone down so far, and a look at what it could mean for a government already mired in so much scandal.

Who Is Nusrat Ghani?

Born in Kashmir, Nusrat Ghani grew up in Birmingham, and worked in the charity sector and at BBC World Service before entering the world of politics. In the 2015 general election, Ghani became the first Muslim women to be elected as a Conservative MP when she won a seat in her constituency of Wealden, East Sussex. Later, she became Transport Minister. Four years ago, the MP made history in the House of Commons as the first Muslim woman to address parliament from the dispatch box, but two years later she was dismissed from government duties in a reshuffle.

The ex-minister claims that she was sacked as Transport Minister because of her faith. Speaking to The Sunday Times – who broke the story on Jan. 23 – Ghani alleges that when she asked a chief whip for an explanation for her dismissal, she was told that “Muslimness was raised as an issue" at a Downing Street meeting, and that her “Muslim woman minister status was making colleagues feel uncomfortable”.

According to the Equality Act 2010, an employer can not discriminate against staff based on protected characteristics including sexuality, gender, disability, or religion. Now, Downing Street has said that the Prime Minister has ordered an inquiry into her claims by the Cabinet Office.

How Has The Government Responded?

Following Ghani’s comments, Boris Johnson’s chief whip, Mark Spencer, identified himself as the person who spoke to the former minister about her dismissal. He denies all allegations, and also alleges that a previous report into Islamophobia in the Conservative Party found “no credible basis for the claims to be included in the report.”

A Number 10 spokesperson said in a statement: "At the time these allegations were first made, the Prime Minister recommended to [Ghani] that she make a formal complaint to CCHQ [Conservative Campaign Headquarters]. She did not take up this offer. The Prime Minister has now asked officials to establish the facts about what happened.”

Professor Swaran Singh’s independent report into Islamophobia, conducted in 2021, examined how the Conservative Party had dealt with discrimination complaints. It concluded that there was “evidence of discrimination" within the party, and called for the entire complaints process to be overhauled, along with an additional 16 recommendations. The Conservative Party has only implemented half of these changes so far, and the Equality and Human Rights Commission is monitoring the situation.

What Has Ghani Said Since?

Ghani says that she did not make a formal complaint because the party’s internal process was “very clearly not appropriate for something that happened on government business". Speaking to The Sunday Times, Ghani claims that she dropped the issue originally after being told she “would be ostracised and her career and reputation would be destroyed" if she persisted.

Responding to Johnson’s call for an investigation, the MP wrote: “As I said to the Prime Minister last night, all I want is for this to be taken seriously and for him to investigate. I welcome his decision to do that now. The terms of reference of the inquiry must include all that was said in Downing Street and by the whip."

This is far from the first time that Conservative Party has faced claims of Islamophobia. In 2019, The Guardian revealed that 15 Conservative councillors – suspended after posting racist content online – were quietly reinstated, per the Guardian. And last year, a poll by anti-racist group, Hope Not Hate, found that almost half of party members believed that Islam represents “a threat to the British way of life”.

The Prime Minister himself has made offensive comments about Islam via a Daily Telegraph article, where he once compared women wearing burqas to “bank robbers” and “letterboxes”. He refused to apologise for the comments to Professor Singh’s inquiry but did apologise “for any offence taken” and said it wouldn’t be language he used as Prime Minister today. Now, he’s ordered the Cabinet Office to conduct a formal inquiry into Ghani’s allegations of Islamophobia.

It comes at a time when pressure is mounting on Boris Johnson’s government, which has been mired in scandal and controversy. As well as facing serious allegations of discrimination from Ghani, the government has also been accused of throwing a number of parties while the UK was under strict lockdown conditions. A report from civil servant, Sue Gray, is due to be published later this week.