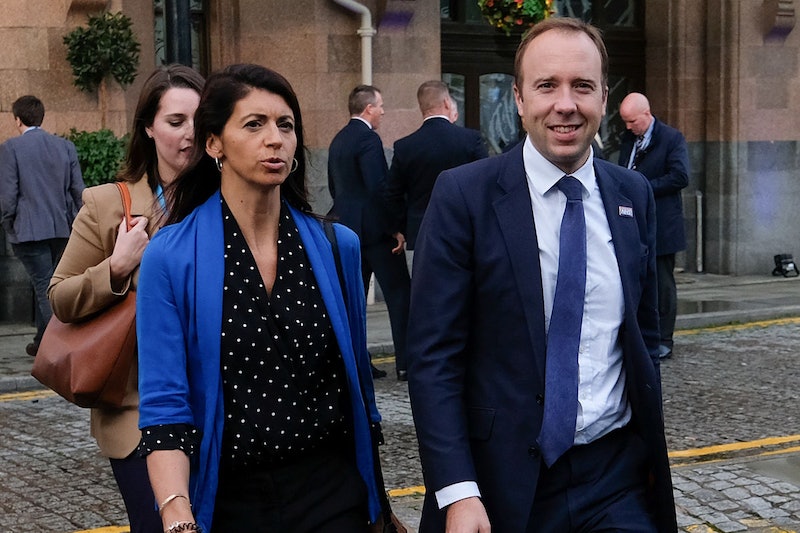 Two homes in the south of England have been raided by investigators looking into who leaked the CCTV footage of Matt Hancock kissing an aide in his health secretary office, the publication of which led him to resign from his position two days later. Officials from the Information Commissioner’s Office (ICO) investigating the leak said it had seized computer equipment and electronic devices on the morning of July 15, 2021, as part of an ongoing investigation into alleged breaches of the Data Protection Act.

In a video and images published in a report by The Sun on June 25, Health Secretary Matt Hancock was seen kissing his aide Gina Guadaglino on May 6, thus breaking his own regulations around COVID-19 restrictions. However, the video came from leaked CCTV footage from the Department of Health and Social Care (DHSC), and has resulted in calls for an inquiry due to security concerns.

The Sun says that an “angry whistle-blower” alerted the tabloid to the video, per New Statesman. A reporter sent to see the footage confirmed it was indeed Hancock but the original source (and how the footage from the DHSC’s internal CCTV system landed in the media’s hands) remains unclear.

Security and property management firm Emcor, which provides CCTV services to the DHSC, said that the footage was taken from the government department without permission. According to the Guardian, the security company reported itself and made a complaint to the ICO, which announced it had set up an inquiry into alleged breaches of the Data Protection Act. Elected police chiefs have reportedly said the investigation should become a criminal inquiry, per the BBC.

“It's vital that all people, which includes the employees of government departments and members of the public who interact with them, have trust and confidence in the protection of their personal data,” said the ICO's director of investigations Steve Eckersley in a statement. “In these circumstances, the ICO aims to react swiftly and effectively to investigate where there is a risk that other people may have unlawfully obtained personal data.”

Since the CCTV footage was leaked and the video stills published in The Sun, there have been growing concerns over security within government buildings. Hancock’s successor Sajid Javid has said that the camera that captured the footage has been disabled in the health secretary offices amid the concerns.

The ICO said the alleged breach falls under Section 170 of the Data Protection Act 2018, which includes the disclosure of personal data without consent. However, The Sun’s editor in chief Victoria Newton told New Statesman that the use of the images showing a cabinet minister "behaving with extraordinary hypocrisy" had been an “open and shut case of ­public interest,” which is a justified defence under certain circumstances of the act.

Speaking to Radio 4, Newton explained that she intends to protect the whistleblower’s identity. “I’d rather go to jail than hand the name over,” she said.

We will update this article as more information becomes available.

More like this
The David Beckham Qatar Controversy, Explained
By Sophie McEvoy
Mollie King & Stuart Broad Just Shared The First Pic Of Their Baby
By Sophie McEvoy
'Waterloo Road' Is Back, With More Than A Few Familiar Faces
By Sam Ramsden and Vivian Iroanya
Matt Hancock Broke a Major Rule With I’m A Celeb
By El Hunt
Get The Very Best Of Bustle/UK