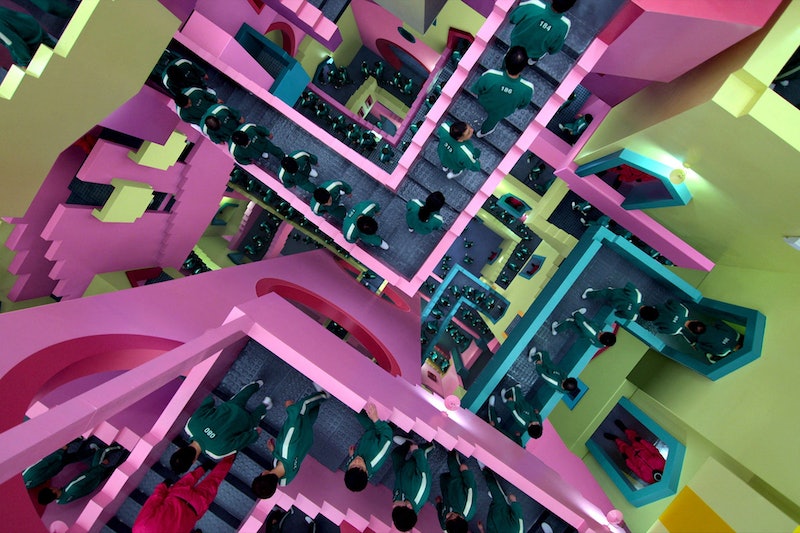 The craze over Squid Game is real. Not only is it officially more popular than Bridgerton (with a whopping 111 million views worldwide), but eagle-eyed fans have found a post-modernist AirBnB that they reckon could practically double as the headquarters of the popular Netflix show. Sans sinister connotations and deadly games, that is.

It is the staircases of ‘La Muralla Roja’, or Red Wall, that stans will recognise from the popular Netflix show. The fortress or a maze-like construction has been compared to those now infamous Squid Game stairs.

Located in Calpe, Spain, the Red Wall apartment complex was designed in 1968 and built in 1973 by famous Spanish architect Ricardo Bofill. According to Arch Daily, Bofill built it as a reinterpretation of the kasbah, ancient citadels in North Africa. There are over fifty homes in the housing project, with at least one available to rent on AirBnB, which can be accessed through a number of private courtyards and winding staircases.

Per Dezeen, Bofill was known for his “bold” use of colour and painted the walls of the block in various shades of red – hence the name of the building. This is contrasted with light blue shades used for some stairs and roof terraces.

Overlooking the Mediterranean Sea, this particular AirBnB has three seafront bedrooms, a large ocean terrace, and a rooftop swimming pool. Per the listing, it is only “a short walk” to the beach and local restaurants and – date-dependent – costs only £81 per night.