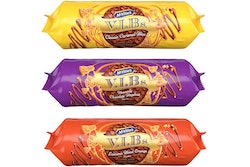 Your cup of tea called, it's lonely and in need of a biscuit buddy. Luckily for you there's a brand spanking new range from UK favourites McVitie's and your cuppa might finally have met its match. So where can you get McVitie's new chocolate digestive biscuit flavours?

McVitie's new Very Important Biscuit, or V.I.B, line is every bit as exciting as it sounds and from July 12 you had better get yourself down to your nearest Asda to stock up. Yes, the range will be exclusive to the supermarket giant until late August when it will be rolled out across the nation's major retailers.

What makes a biscuit more important than the average I hear you ask? Well, how about three brand new flavours all of which feature a generous layer of caramel? No, you're drooling.

Perfectly golden baked biscuits are covered in luscious caramel and milk chocolate. There's three options to choose from — Classic Caramel Bliss, Heavenly Chocolate Hazelnut, and Luscious Blood Orange and considering they're only £1.79 per packet you might as well purchase all three.

According to the manufacturer, the V.I.Bs have an "astounding flavour and irresistible texture, combining to form the pinnacle of our biscuit portfolio." These are some pretty hefty claims from McVitie's but judging by their track record, it's safe to say that they know what they're doing. According to a YouGov poll celebrating 2019's National Biscuit Day celebrations, their chocolate digestives came out on top as the UK's favourite biscuit.

Pladis, the company which owns the brand, reported that in 2019 biscuit sales in the UK were up 2.5% to a not so crummy £2.7 billion. Their forecast predicts a further increase in biscuit sales in the upcoming year. Considering how 2020 has gone so far, is hardly surprising. I'll pop the kettle on.