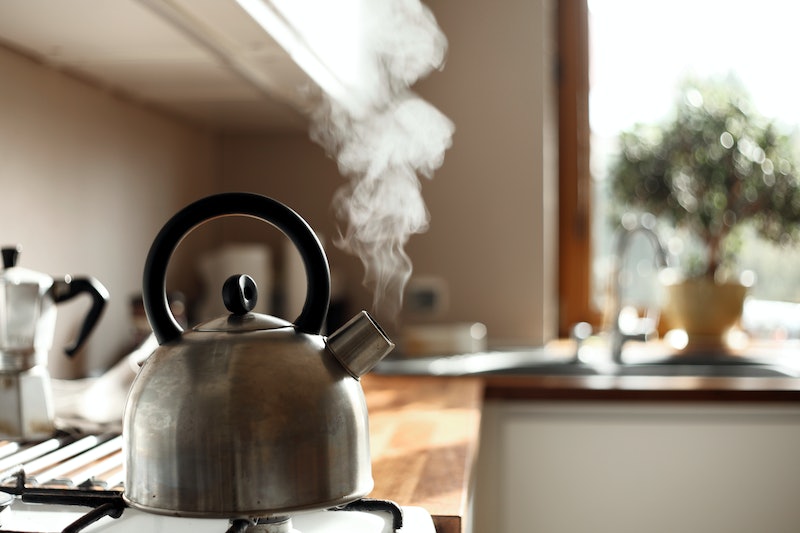 Everyone has their preferences when it comes to making tea, whether that's how long you leave the teabag in or whether you add milk before or after boiling the water. However, you could be ruining your perfect cuppa with one of these stages and it's all to do with the kettle. According to experts, you should never use boiling water to make tea. But why?

It's all to do with how the tea leaves react to the temperature. As professional food and drink taster Martin Isark told the Daily Mail, water boiled to 100 degrees "will kill the desirable nuances of tea" leaving you with a "strong flavour of dry, astringent tannins". Tannins are a chemical compound that gives tea "its dry, somewhat bitter flavour" according to Healthline, and can also affect its colour.

This coupled with leaving a teabag in water for too long can make a brew taste, as Isark states, "no better than cabbage water". Yuck. Founder of Jing Tea Edward Eisler agrees, telling the newspaper that "many teas taste better when made with cooler water."

Instead, Isark recommends that you boil the water and let it cool to 80 degrees. This can be achieved by making your tea consist of roughly 20 per cent cold water, as "boiling water cools down by roughly ten degrees for every 10 per cent of cold water added" according to the expert. If you own a fancy kettle that has a temperature control function, even better.

To make the most out of the flavour tea leaves provide, Twinings recommends using fresh water whenever you boil the kettle. They say to try your hardest not to re-boil water already left in the kettle either, as "it loses all of its oxygen" which can leave you "with a really flat cup of tea."

The tea makers also agree with Isark and Eisler's sentiments, adding that you should "never pour boiling water over a tea bag or loose tea." This is due to the heat burning the tea and preventing the release "of all its maximum flavours." They recommend that you let the water rest for two to three minutes before pouring it. This is advice coming from the Queen's official tea supplier, after all.