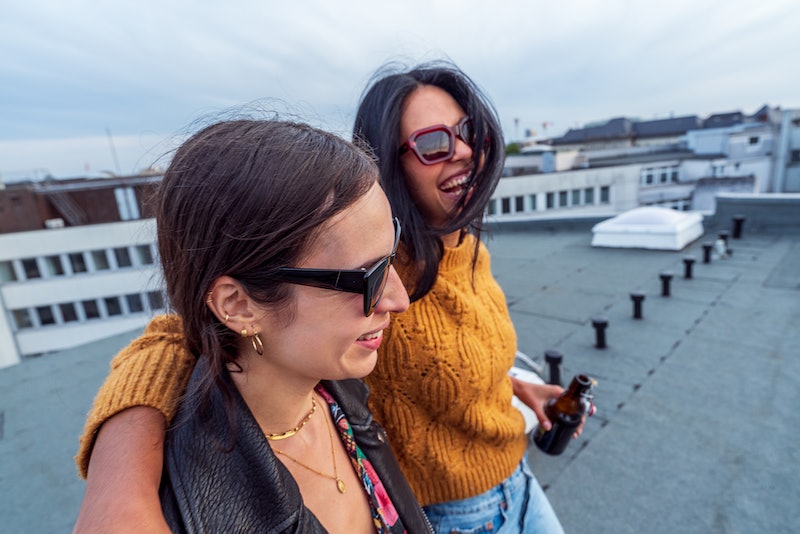 Brandie Carlos was raised by her traditional grandmother, who immigrated to the U.S. from Sahuayo, Michoacán, Mexico. Over the years, Carlos, who is the founder of the directory Therapy For Latinx, says the pair had many difficult heart-to-hearts, challenging her grandmother’s conservative views. But when her grandmother heard the word “Latinx” for the first time while watching Univision, she embraced the term.

“My grandma told me that she was grateful to know about [Latinx], so that she wouldn't dismiss people's identity,” Carlos tells Bustle. “I think these conversations are important to have — especially with the people we love the most. Having older generations be a part of this conversation is important because it breeds more empathy, and acceptance.”

“Latinx” is so much more than a word — it’s an identity for those who've never felt that the terms Hispanic or Latino represented them. For older generations, though, there can still be a lot of confusion surrounding what Latinx means, and why people choose to identify with it. Some people say that explaining the term Latinx to family members often leads to deeper conversations surrounding culture and identity.

Adriana Alejandre, LMFT, a trauma therapist and founder of the Latinx Therapy podcast, tells Bustle that simply talking about the term can lead to discussions about self-esteem and acceptance. “When the term Latinx has come up, there have been beautiful conversations and tears about identity, and language necessary to feel supported," she says.

At the same time, the debate over using Hispanic or Latinx is a contentious one, particularly across generational lines. The majority of Hispanic adults are unfamiliar with "Latinx" as a term, according to an August 2020 Pew Center report, and a 2021 Gallup poll found that only 4% use it, mainly younger, college-educated women. However, 57% of people polled in 2021 said they had “no preference” between the terms Hispanic, Latino, and Latinx, and many people simply identify with their country of origin instead — saying “I’m Mexican,” or “I’m Uruguayan.”

“My mom has continued to express her interest in learning more about [the word ‘Latinx’], and my father just ignores it,” freelance writer Andrea Lausell tells Bustle. “As for my other family members, they are more hostile when I try to explain it, and end up not engaging with learning about the word at all.”

According to NPR, the term Hispanic was added to the 1980 census after being championed by Hispanic people in President Richard Nixon's administration; the term Latin American was considered "too foreign." Nowadays, Latinx and Indigenous activists say the word Hispanic erases the diverse dialects and Indigenous cultures of Latin America. Moreover, the term Hispanic refers explicitly to Spanish speaking countries, including Spain and countries that were colonized by it, but excludes non-Spanish speaking countries of Latin America, such as Brazil. The term Latinx is one way some people who've never felt represented by the word Hispanic have chosen to reclaim their identity.

Laura Ozuna, the founder of Chronic Sad Girls Club, who identifies as Latinx and Mexicana, feels the word Latinx may force older generations to confront internal biases — or simply bring them to light, as it has with her parents. “I do feel empowered by the term Latinx, because it’s a statement to my continuous efforts to unlearn lots of what I’ve been taught. [...] I tried to make the conversation [with my parents] as casual and straightforward as possible and was met with resistance and defensiveness,” she tells Bustle. “They don’t favor the term Latinx, and barely tolerate it because there is a refusal to even acknowledge misogyny, transphobia, and internalized racism. I’m definitely an outsider in my own family (eldest daughter problems) because of my views.”

Like Ozuna’s parents, many critics of “Latinx” are vehemently opposed to the term even when the inclusivity of the word is explained. In an op-ed for Latino Rebels, Hector Luis Alamo called “Latinx” the “bulldozing of Spanish,” arguing that “Latino” is enough of a gender-inclusive term because the "o" ending in Spanish is considered neutral. Critics also argue that "Latinx" is too Americanized, according to a 2017 article from NBC. (It's worth noting that a 2016 Pew Research Center report revealed that younger generations of Latinx people in the U.S. are speaking much less Spanish at home, which may partly explain why the term has risen in popularity.)

What Does Latinx Mean?

As Mother Jones reported, “Latinx” first appeared online in 2004 as an alternative to Latino and Latina, as well as the proposed gender-neutral term “Latin@” (pronounced “Latino/Latina”). Since then, Latinx has become a staple term for younger generations wanting to be inclusive of queer, nonbinary, and gender non-confirming folks. Merriam-Webster officially added Latinx to its dictionary in September 2018, solidifying the ever-growing popularity of the term. Another term that’s growing in recognition is “Latine,” pronounced “lateen-eh,” which was popularized by LGBTQ+ communities in Spanish-speaking countries. In a 2021 interview with NPR, The Kid Mero (of Desus & Mero) explained why he likes the term Latine as an alternative to Latinx. “I heard somebody else say Latine. And I was just like, that makes more sense because it flows better. It sounds right in Spanish.”

If you're wondering why "Latinx" is considered more inclusive than "Latino" or "Latina," let’s go back to 10th-grade Spanish class. As a refresher to Spanish grammar, all nouns are assigned a masculine or feminine gender, which typically shows up in the last letter of a word. There are exceptions, but in general, a word that ends in -a is "feminine" and a word that ends in -o is "masculine." When this rule is applied to people, the masculine version of a word is considered the neutral — “el doctor,” the doctor, versus “la doctora,” the female doctor — unless the word is describing a group of all women — “todo el mundo,” everyone, versus “todas las mujeres,” all the women. It's the case even if you’re describing a group of nine women and one man — you still use the masculine “neutral.”

For this reason, many older Spanish speakers may be reluctant to adopt the -x ending, since the idea that -o is neutral is already an ingrained part of the language. But not only does using -o as neutral erase the experiences of women, it denies the possibility that a person may not identify as masculine or feminine. Saying Latinx or Latine instead of Latino or Latina includes people who may identify outside the gender binary.

Alejandre suggests that feeling at home with an identity label is ultimately a mental health issue. “Having a term that someone can identify [with] wholly shifts their mental health in a positive direction,” she says. According to a 2015 report from the National Alliance on Mental Illness (NAMI), close to 17% of Latinx people in the U.S. have a mental health condition, and those who are part of the LGBTQ community are twice as likely to have a mental illness. "I believe that not everyone has to identify as Latinx, but it is a word that we should respect when someone does identify themselves as Latinx," Alejandre says.

For Lausell, she says she will continue to have conversations with older family members about gender, the fluidity of language, and incorporating Latinx into their vocabulary. “No one is saying you can't say Latina/o; if that works for you, use it, but when you're talking about a group and you don't know everyone's gender identity, be kind and use Latinx.”

Adriana Alejandre, LMFT, a trauma therapist and founder of the Latinx Therapy podcast

More like this
15 Gifts That Bring Your Faraway Loved Ones Closer During The Holidays
By Kaitlin Marks
44 Impressive Secret Santa Gifts That Won't Break The Bank
By Sadie Trombetta and Lauren Grant
Here’s Your Horoscope For Thanksgiving Weekend
By Mecca Woods
32 Cheap Gifts For Your Bestie That Go Beyond Basic BFF Necklaces
By Emily Kelley, Mia Mercado and Brittany Leitner
Get Even More From Bustle — Sign Up For The Newsletter

This article was originally published on Sep. 16, 2019