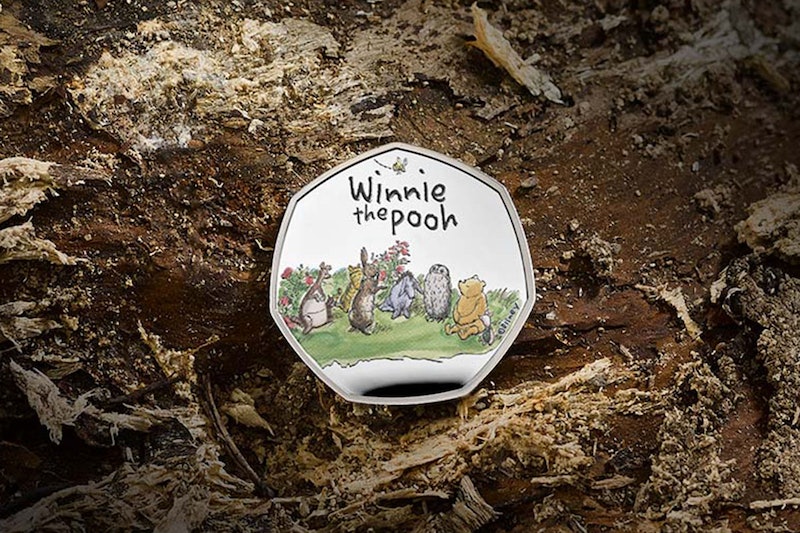 What do Winnie the Pooh, Alice’s Adventures in Wonderland and the Mr. Men Little Miss books have in common? Yes, they’re all childhood favourites, but they’re also some of the few characters selected to be immortalised in silver on a collection of commemorative coins by the Royal Mint over the years.

A.A. Milne’s Winnie The Pooh, inspired by his son Christopher Robin Milne and his favourite stuffed toy bear (or so the story goes), and his friends from the Hundred Acre Wood are the latest characters joining Alice and Mr Happy in being struck onto a coin by the Royal Mint to mark the 95th anniversary of the first volume of Christopher Robin’s adventures, Winnie The Pooh, first published in 1926.

The latest commemorative coin, featuring a group shot of Winnie the Pooh and his trusted friends – Piglet, Owl, Eeyore, Rabbit, Tigger, Kanga, and Roo – on a 50p piece, is the fourth coin in a nostalgic collection inspired by Milne’s timeless stories and will join the first three designs featuring Winnie the Pooh, Christopher Robin, and Piglet, released by The Royal Mint in 2020.

The commemorative 50p piece, created by designer Daniel Thorne, is based on the original illustrations by E.H. Shepard, taken from the pages of Milne’s classic childhood tales, and will feature an additional bee motif by Thorne on each design in the series. The Royal Mint’s 1,100-year-old minting traditions have been combined with innovative colour printing technology to create the special coloured versions of Pooh and friends.

“With each design, so much care and attention has been given to remastering the iconic decorations for the canvas of a coin while staying true to the texts people know and love,” said Thorne, the Royal Mint designer behind the commemorative collection. “I also wanted to add something extra special for collectors, with the bee motif. Inspired by the original decorations, the buzzy bee from the storybooks features on each of the nine coins in the collection.”

The 50p coins are available to buy from the Royal Mint from £10, and available in gold, silver and brilliant uncirculated, and special-edition colour, with the collectable limited-edition uncirculated gold-proof coins worth £1,065. Milne’s “wise” Owl and “wonderful” Tigger are set to be brought to life on another official UK coin later this year.