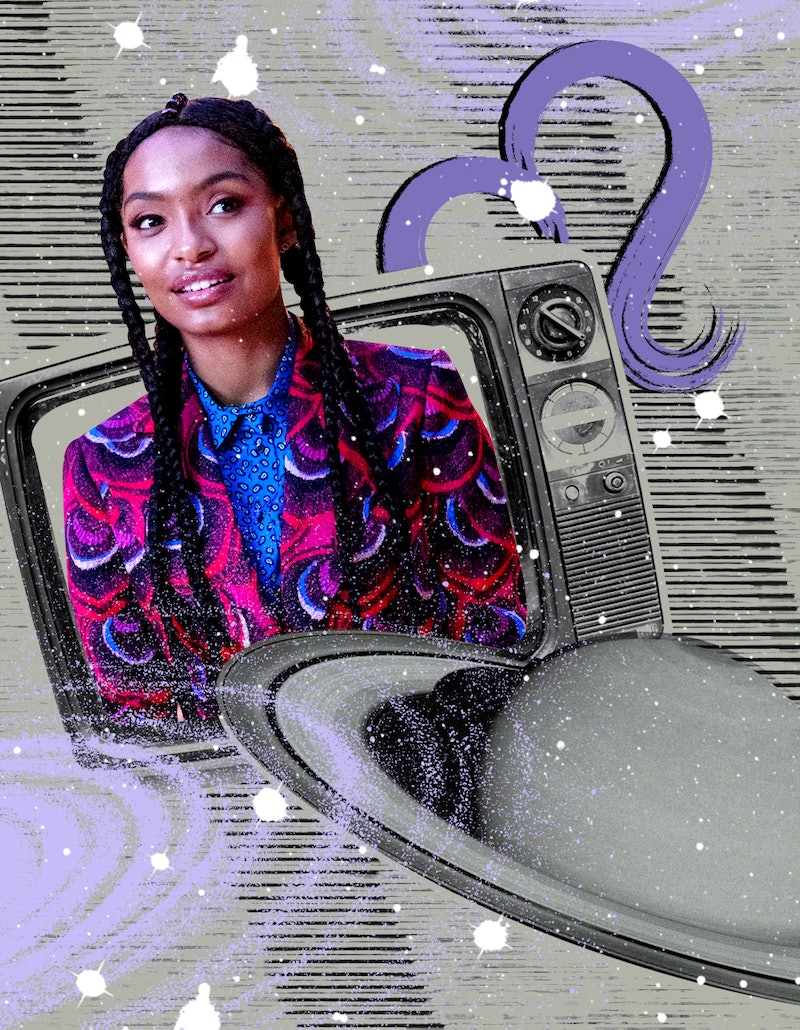 In Astrologically Speaking, astrologers make their case for your new favorite character's zodiac sign, based on specific scenes, quotes, and even fashion choices. Here, Alexandria Lettman, creator of Jupiter Jewel, explains why Zoey Johnson of grown-ish is most definitely a Leo.

It’s becoming increasingly difficult to come across someone who isn’t familiar with their astrological sun sign. Whether we immerse ourselves in our monthly horoscopes or not, we all get intrigued by the cosmos and its influence on us. This is particularly true when it comes to our favorite TV characters and why we have so much (or so little) in common with them. We’ve watched Zoey Johnson from black-ish grow up and then proceeded to watch her take on new challenges in the college-based spin-off show grown-ish. Zoey is undoubtedly a flawed main character — who could forget her very confusing, up-and-down “situationship” with Aaron — and it’s clear after getting called out for “looking down on everyone else” by Nomi in Season 2, Episode 14, “Can’t Knock the Hustle,” that she’s far from being the perfect sister or friend. But there’s something about her dramatic life that continues to hold our interest. As an astrologer, here are my top three reasons why I’m certain that Zoey’s sun sign is Leo. Spoilers for grown-ish follow.

Zoey Is A Very Confident Person

Zoey is popular, fashion-forward, and the favorite child out of three siblings. She was always treated like a shining star by her dad throughout her teen years, which is why she has such a hard time not being admired by her college friends. Zoey is super confident in herself, which is evident in her revealing internal monologue that’s laced with uplifting and inflated self-praise, which sometimes comes at the expense of others. But she deeply cares about what other people think of her, causing her to obsess over social media followers and compare herself to others. Leos are ruled by the brightest star in our solar system: the sun. They’re vivacious leaders that are aligned in their own light — though they need external validation to sustain their fire. Zoey tells us herself in Season 2, Episode 4, “In My Feelings,” that she is “used to being the person that others feel second-best to” — and comments such as this get her called out for being self-absorbed by her friends.

It’s no secret that Leos are the drama queens of the zodiac. Zoey certainly lives up to this reputation: She always seems to find herself at the center of chaos. For instance, when she found herself in a love square and torn between her ex-boyfriend Cash, her crush Aaron, and her friend Luca in the Season 1 finale. When she made a deliberate choice not to tell her friend Jazz that her boyfriend, Doug, was out partying without her in Season 2, Episode 3, “New Rules,” she created a rift in her friendship circle for breaking the “girl code.” Leo suns are associated with the element of fire; they’re passionate, bold, and energetic. Their zodiac symbol is the majestic lion, which symbolizes strength, power, and royalty. Leos like Zoey have a great sense of pride that often gets them wound up in predicaments. But their big hearts always save them in the end, which Zoey proves when she gets Luca a dream job opportunity to style Joey Bada$$ for a photoshoot in Season 3, Episode 7, “Doin’ The Most.”

Zoey is determined, impulsive, and a sucker for love. Despite having a reputation for being a little selfish when it comes to romance and friendship, Zoey has so much love to give. In Season 1, we see Zoey embark on a short, whirlwind romance with her first love, Cash. She falls for him hard and fast and even considers leaving her home, her friends, and her family behind to support him in his quickly growing basketball career. Of course, her loved ones object to this, but Leo suns are incredibly headstrong, independent, and always lead with their hearts. Zoey insisted that she had to take her own time to figure out what was the best decision for her. And in the end, Zoey and Cash decide to go their separate ways. When it comes to love, there’s nothing that can get in the way of a Leo’s fixed decision-making.

Zoey is an exaggerated and dramatic Leo. Her need for validation and overconcern for her own interests have a tendency to eclipse her loving nature. Beneath the fabulous outfits and drama lies a woman who just wants to love and be loved. Nevertheless, Leos make the perfect stars, and Zoey is no doubt a captivating protagonist.

More like this
Andie From 'How To Lose A Guy In 10 Days' Is A Total Gemini
By Nina Kahn
The 3 Most Organized Zodiac Signs, According To An Astrologer
By Kristine Fellizar
These 4 Zodiac Signs Make The Best Bridesmaids
By Nina Kahn
These 3 Zodiac Signs Could Write A Bestselling Novel
By Brittany Beringer
Get Even More From Bustle — Sign Up For The Newsletter
From hair trends to relationship advice, our daily newsletter has everything you need to sound like a person who’s on TikTok, even if you aren’t.