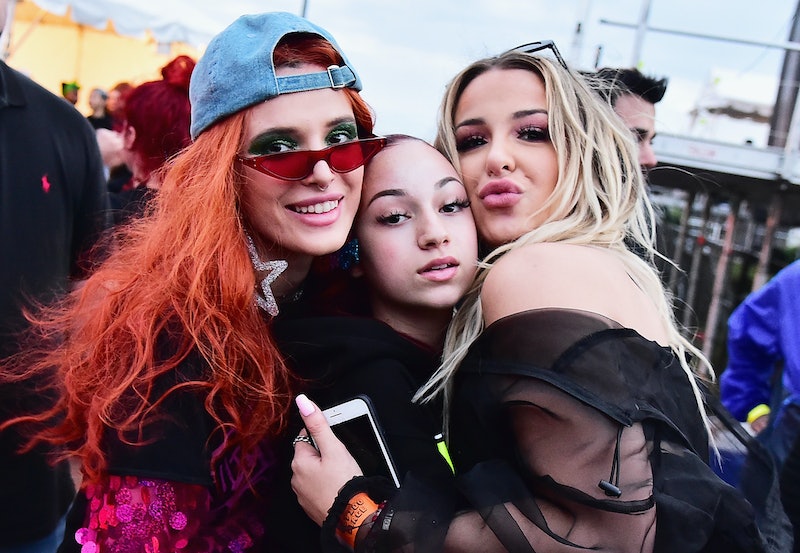 Every now and then, something happens in the celeb world that makes you stop and think about your own code of ethics — like when Bella Thorne released her new song "Stupid F*cking Bitch. It's allegedly about Tana Mongeau, who she dated along with musician Mod Sun, back in 2019.

After the three broke up, Thorne accused Mongeau of breaking "girl code" in a series of tweets saying, "Tana and I are no longer good. She broke girl code I’m over it." And now that she's dropped this new song, it leaves us all to wonder once again: What are the cases for and against girl code?

For the purposes of this article, let's focus on one specific definition of girl code, which states you should never, ever date a friend's ex. Since it's your duty as the friend to help them move on and forget all about their relationship, the last thing you'd want to do is hop into bed with their ex, date them, or worse — fall in love.

Not only would that make you a traitor, according to girl code, it would likely hurt their feelings and make your friendship logistically difficult. When breakup emotions are fresh, it's tough to think about an ex, much less hang out with them as part of a group or watch as they move on — especially if the person they're moving on with is a close pal.

There are, however, situations in which it's OK to date a friend's ex. Read one below for four women's take on the matter.

Why Some People Support "Girl Code"

For many people, their support for "girl code" stems from past mistakes, like Shari, who was 16 when she dated a friend's ex. It all happened when she started attending a new high school along with her best friend, who very quickly got a boyfriend. "I felt left out," Shari tells Bustle. So once the two broke up, she swooped in and started dating him, without thinking about how it might affect her friend.

Shari says the decision was based in insecurity and the desire to to feel a part of something. But as you can probably guess, it didn't end well. The two dated for about seven months before the boy repeated his habit and left Shari for yet another girl. "Not only did I experience my first heartbreak, but I had also hurt and lost my best friend — a friendship that was never restored."

Ever since, Shari has sworn by girl code. "To this day, I have never dated another friend’s ex," she says. "I’ve learned how important my female friendships are and I could never imagine breaking the girl code."

Hannah, 26, agrees. "To me, girl code is important and should be an unspoken rule in friendships," she tells Bustle. Her story began in college when she started developing feelings for a close friend, who admitted he also had feelings. Hannah was head-over-heels and thought they'd be together, until he shocked her by admitting he didn't want to take things further.

"Fast forward a little less than a year later and one of my close friends from college, who claimed to have not known how serious my feelings were for him, asked me if it would be OK if they started dating," Hannah says. "I was completely blind-sided."

While her friend was trying to do the right thing by asking, the rules of girl code had already been broken. "They had already been talking for a few months at that point," Hannah says. "I thought, what's the point in asking me if you've already established feelings for one another?"

For Hannah the revelation was crushing, and she couldn't foresee a future with either of them. "I told my friend that I understood you can't help who you fall in love with, but that she couldn't keep both me and him in her life for how deep it had cut me. So we parted ways."

Breaking girl code is a quick way to lose a close friend, especially when love is involved. But there are certain instances in which it might be perfectly acceptable to date a friend's ex. "I think as long as both friends know about it and are OK with it, [talking to an ex is] fair game," Sabrina, 26, tells Bustle.

She points to one time in particular when she hooked up with a friend's former hookup. "I saw a picture of him and thought he was totally my type so she introduced us and when I went to visit her, she made every effort possible so we could meet and hang out or whatever was to happen between us," Sabrina says.

Her friend was helping facilitate the hookup because she didn't have any feelings — which obviously meant it was more than OK for Sabrina to do her thing. "We even bonded over it and made a joke out of it like, 'Yeah, high five, we both hooked up with a 10!'"

Other factors lessen the confines of "girl code" too, including the type of relationship a friend might be looking for. "When you're in the LGBT community, and surrounding yourself with people who are more open with their definitions of relationships — polyamory and more non-traditional structures — I think that sense of 'ownership' isn't there," Ruby, 32, tells Bustle. "Just because you dated someone, doesn't mean you 'own' the rights to them forever."

Ruby says her first instinct is to question the strictness of girl code, but says she doesn't necessarily disagree with it, either. "I've dated several exes of people I'm still very close friends with and it wasn't a problem. It's just something you have to discuss with them first, to make sure they feel comfortable with it. If you aren't crossing boundaries it's OK to explore. But you want to do right by your friends."

So, Does "Girl Code" Really Matter?

"Overall, my stance is that it varies by situation," Michelle Mouhtis, LCSW, a licensed therapist and relationship coach, tells Bustle. Since everyone's point of view is valid, she says it'll be up to the individuals within the friendship to assess what's going on, talk honestly, and decide what'll work best for them.

"My rule of thumb is this: If you, your new partner, your friend, and your ex who she is now dating can all go out for dinner together and have a great time with no hard feelings, then it's [no big deal]," Mouhtis says. But if that dinner party would stir up drama, hurt feelings, or remind someone of a fresh breakup? Reconsider your priorities, and choose which course of action aligns best.