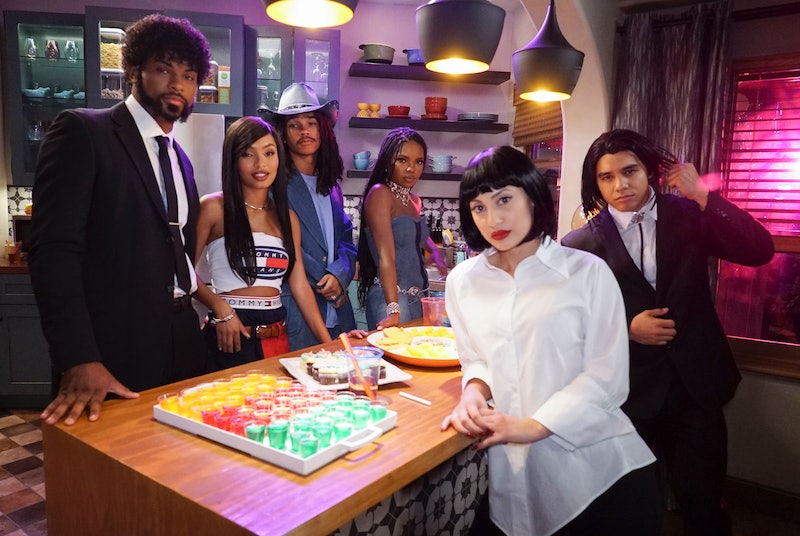 It seems like a lifetime has passed since Zoey's 21st birthday party in the grown-ish Season 3 spring finale. When things left off, she and her now-former classmates were, as always, all working through issues most college students can relate to: sex, relationships, politics, money and identity.

"These are things that every kid our age is going through," Luka Sabbat, who plays Luca Hall, recently told Complex. "We live in a very political time. A lot of things are being hypersexualized, a lot of people are discovering their sexuality ... So I think it's cool to cover it all because these kids are out figuring it out for themselves as well."

After being waylaid by coronavirus delays, the show will return to finish out Season 3 on Jan. 21. Here's everything you need to remember before diving back in.

After spending the season juggling classes at CalU with her side gig as personal stylist to rapper Joey BADA$$, Zoey made the ill-advised decision to drop out of CalU to focus on her career full-time. Her friends, though all against the decision, couldn't talk her out of the idea that she'd "outgrown" college and should accept her dream job of joining Joey on tour. Even Luca said that college life just wouldn't be the same without her.

Seasons 2 and 3 ended very similarly: with on-again, off-again couple Zoey and Aaron locking lips. After Zoey broke the news to her ex that she'd filed the paperwork and was "officially no longer a CalU student," Aaron pulled her in for an epic goodbye kiss. "Now we're even," he told her, referencing their airport lip-lock from the Season 2 finale. Suffice it to say, things are still as complicated between them as ever.

Zoey & Luca Are In a Good Place

After beginning the season in rocky territory post-breakup, Zoey and Luca backslid into a "clothing-optional walk down memory lane," or in non Zoey-speak, they had sex. The no-strings-attached relationship hit a major roadblock when Zoey discovered Luca was also hooking up with new transfer student Jillian. But in the end, Zoey and Jillian became close and the trio all seemed to be in a healthy place.

After revealing that she was pregnant at the end of the Season 3 premiere, Nomi struggled to tell the baby's father and decide whether or not to place her child up for adoption. Eventually, she came to the conclusion that she needed to leave CalU to figure it all out. Her water broke while she was FaceTiming with Zoey during the spring finale, so answers to those questions should be imminent.

Jazz & Doug Are On a Break

Unable to juggle her track career with her all-consuming relationship with Doug, Jazz decided to remove the distraction and ask her boyfriend for some time apart. "While I train for the next six months, will you wait for me?" she asked him at episode's end. Only time will tell how that works out for them.

More like this
Armani Jackson Is Following In His Famous Actor Sister’s Footsteps
By Catharina Cheung
'The Crown' Season 6 Has Suspended Filming "Out Of Respect" For The Queen's Death
By Bustle Staff
The 'Freeridge' Cast Shared Their Hopes For A Potential Season 2
By Grace Wehniainen
Netflix Shut Down 'Bridgerton' S3 Rumours About A “Very Dark” Storyline
By Bustle
Get Even More From Bustle — Sign Up For The Newsletter
From hair trends to relationship advice, our daily newsletter has everything you need to sound like a person who’s on TikTok, even if you aren’t.