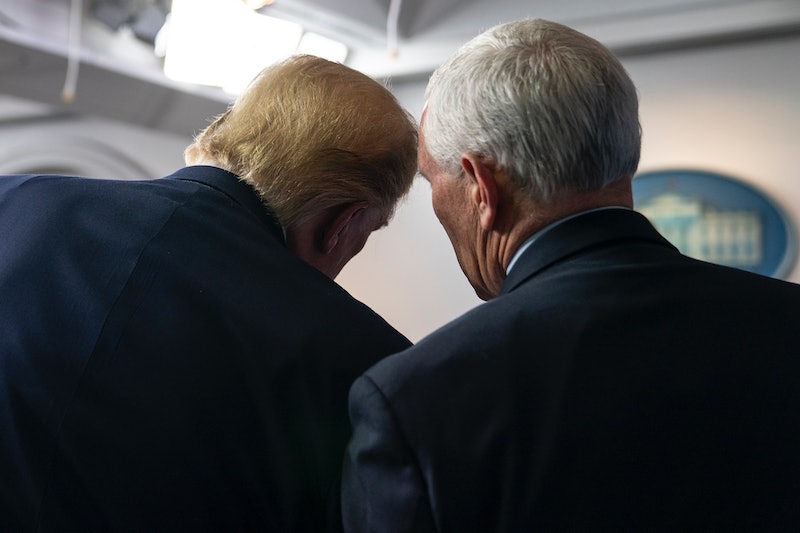 With less than two weeks left in Donald Trump's presidency, lawmakers have once again called for invoking the 25th Amendment to remove him from office. The calls come from both Republicans and Democrats following the Jan. 6 storming of the U.S. Capitol by an extremist pro-Trump mob, which was encouraged by the president himself.

On Thursday morning, Rep. Adam Kinzinger (R-Ill.) became the first Republican congressman to publicly call for Trump's removal, according to CNN. "It’s with a heavy heart I am calling for the sake of our Democracy that the 25th Amendment be invoked," he wrote on Twitter, accompanied by a video explaining his decision. He is joined by Democrats such as Sen. Chuck Schumer (D-N.Y.) and 17 members of the House Judiciary Committee, according to The New York Times. Members of the president's cabinet were also reportedly discussing the issue on Wednesday night, according to ABC News.

So, as a refresher for folks at home, what is the 25th Amendment?

Ratified in 1967 following the assassination of John F. Kennedy, the amendment lays out the rules of succession in the case of a president's death, resignation, removal, or incapacitation. The fourth and final section deals with incapacitation, for instances when a president "is unable to discharge the powers and duties of his office." It gives the vice president, supported by the majority of the executive cabinet, the power to declare a president unfit to serve. The VP — in this case, Mike Pence — would then assume the role of acting president. (If Trump were to object to this action, Pence would require a two-thirds supporting vote in both the U.S. House and Senate.)

Section 4 has never been invoked. The last time the amendment was used, in 2007, President George W. Bush cited Section 3 to temporarily transfer his powers to Vice President Dick Cheney before undergoing a colonoscopy. Bush reassumed his powers only a couple hours later.

“What happened at the U.S. Capitol yesterday was an insurrection against the United States, incited by the president. This president should not hold office one day longer," Schumer said in a statement on Twitter. “The quickest and most effective way — it can be done today — to remove this president from office would be for the Vice President to immediately invoke the 25th amendment."

This article was originally published on November 2, 2016