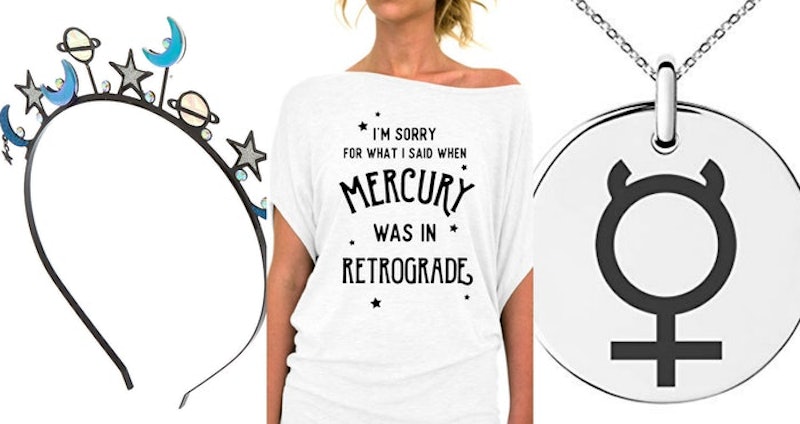 With Mercury retrograde kicking off on Halloween to (hopefully not) derail all of our well-made holiday plans, we're going to have this planet on the brain anyway, so might as well dress up to show it. And TBH, even if you're not into astrology, I can almost bet you're aware of the cultural phenomenon that is Mercury retrograde.

During a Mercury retrograde period, the planet Mercury (which astrologically governs over traveling, scheduling, technology, and communication) appears to move backward in the sky for a few weeks. As it does that, it purportedly turns the aforementioned areas of our lives upside, making it hard to communicate clearly or stick to plans, and causing snags when it comes to timing and our tech devices. In other words, they mark those periods of time that happen every few months during which everyone seems to blame their lateness, forgetfulness, and sloppiness on the (not-so?) innocent planet Mercury.

Who says Mercury retrograde's antics have to bring you down? Embrace your unwavering cosmic ~babeliness~ with a cute n' flirty Mercury retrobabe costume. Pair an on-theme screen tee (we found an adorable one below from Etsy!) with a metallic skirt and cosmic accessories and boom: Retrobabe city.

Wake Me When Mercury's Direct

With it's ability to destroy our meticulously-planned schedule, send all attempts at clear communication haywire, and deliver traffic jams and phone-freezes willy nilly, it's no wonder many of us have the urge to sleep straight through Mercury retrograde and set our alarms for three weeks later, when the planet finally goes direct. Live the fantasy and dress up in a cozy, sleepy, "wake me when it's over" Mercury retrograde look by pairing a cosmic robe with a Mercury Rx sleep mask and mug full o' coffee.

This one's fun, funny, and punny all at once: You're Sailor Mercury Retrograde! Pay homage to your favorite childhood anime show and your least favorite astrological transit with this mash-up costume. A cute Sailor Mercury costume can easily go to a clever new level with some retrograde-themed accessories, like a sparkly enamel pin and a fun, shiny fanny pack that will pull the costume's punny theme together.

Retrogrades aren't all bad — they give us an excuse to chill, sit back, reflect on our lives, and not make any hasty moves. That said, you may as well throw on a cute outfit and be cute while you wait for it to pass. This retrograde costume is stylish and understated, but everyone will get the vibe. keep things simple with a galaxy-themed dress and some stylish and girly Mercury themed, like nail stickers and a printed clutch.

When Mercury retrograde hits, it undoubtedly feels like a tornado is ravaging through your life, schedule, ability to communicate, and most frustrating of all, your technological devices. Grab a tornado costume and a long phone cord to wrap around and attach to yourself to represent the minor tech disasters and communication errors that run rampant during this planetary transition. Add a large pendant with the Mercury symbol, and there you have it.

Mercury retrograde is stressful enough, so why try to complicate things with an uncomfortable costume? Keeping your cool while Mercury goes retrograde is a must, so get cozy and show off your clever costuming skills in some funky galaxy-printed sweats, a cozy Mercury bandanna, and a top that explains exactly why staying chill is an uncompromising stance during this transit.

"Blame It On Mercury Retrograde" Devil

Sometimes Mercury retrograde genuinely wreaks havoc in your otherwise stable life. Other times, you use it as a straight-up excuse to do whatever the heck you want with total recklessness. Yep, I said it. We've all blamed something on Mercury retrograde before (even if maybe, just maybe, it was kinda our own fault), so take that concept to the max with a cute and naughty "blame it on Mercury retrograde" costume.

"I'm Sorry For What I Said During Mercury Retrograde" Angel

OK, did your personal Mercury retrograde antics go too far? If you often find yourself owing everyone in your life an apology once Mercury ends a retrograde period, then perhaps this Mercury retrograde angel is the costume for you. Who could say no to the sweet, innocent "I'm sorry" face of a person who was just too affected by the pesky retrograde energy?

Feelin' like you're in a hazy daze of confusion during Mercury retrograde? Us, too. Recreate that feeling in costume form by pairing a screen tee with some retro-daze lookin' sunglasses and a trippy holographic bottom.