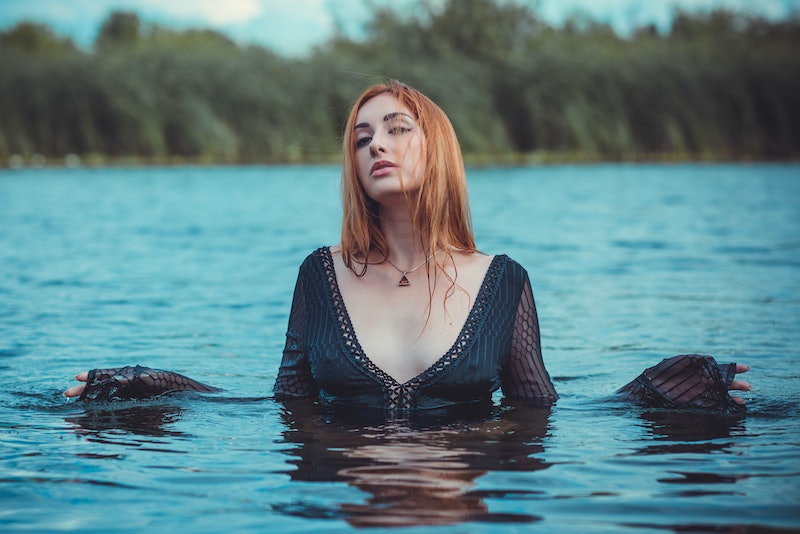 Horror movies streaming 24/7. Fake-blood-covered costumes. People wearing UGGs in public. We know Halloween season is all about the scaries, but nothing this Halloween is going to compare in its fear-inducing-abilities to the dreaded and inevitable Mercury retrograde period that's set to start on — you guessed it — Halloween day. Oct. 31 marks the beginning of the last Mercury retrograde transit of 2019. But it is certainly not the least, as Mercury will be in Scorpio this backspin 'round, giving this transit the potential to be the most intense and emotional retrograde period this planet's had all year. In other words, Mercury retrograde beginning on Halloween this fall is going to be the scariest thing happening this Halloween season. And if you recall the drama of the past few retrogrades, then you know that prospect is highly spooky.

Known for being a sort of "dark horse" of the zodiac, Scorpio is a deep, intense, and sometimes dark water sign — full of emotions, loyalty, and of course, its poison-filled stinger, on the ready. "This Mercury Retrograde will be in Scorpio," shares astrologer Lisa Stardust, who spoke with Bustle about the upcoming transit. "We will all be reassessing communications and trying to find the truths of the matters." That said, when Mercury retrogrades through this sign, things can get intense quickly.

Let's first quickly talk about Mercury retrograde in general, in case you're unfamiliar. All planets have retrograde periods in astrology, during which they appear to move backward in the sky for a time. Planets aren't actually moving backward — that's not how planetary orbits work! — but from our vantage point on earth, it simply appears to be the case. During a retrograde, the areas of our lives that the backspinning planet rule in astrology are thought to be slowed down, shaken around, and turned upside down. In the case of Mercury, that involves all things related to communication, clear thinking, transportation, scheduling, and technology. In other words, the bits of machinery that help our busy lives run smoothly. Needless to say, few people look forward to these transits, which in Mercury's case, take place several times a year and last around three weeks.

So when Mercury, planet of communication, is retrograding through the passionate, private, and sometimes-paranoid sign of Scorpio, we should expect deep and hidden feelings to surface — whether by way of our own revelation, or through someone else's sleuthing. "Mercury retrograde in Scorpio is a detective," explains Stardust. "Be prepared to discuss all taboo matters and to question exes, lovers, and others with their intentions (past, present, and future)." Emotions, paranoia, jealousy, and rage can heat up very quickly with the slightest miscommunication during this transit, so beware. Pandora Astrology also warned about the Mercury RX Halloween dangers that lie ahead emotionally: "Emotional intimacy can be deepened by truth-telling and even more so by truth-hearing but beware of possibly treacherous waters ahead — if you ask for the truth from your partner, you’d better be ready for whatever they have to say." Terrifying? Yes. Helpful in the longrun? Also probably a yes. Embrace the truth, peeps, even if it's frightful.

And not to make you feel even more freaked out, but since Mercury rules technology, this backspin might also make us vulnerable to privacy invasions via our devices. "Lock up your cell phones and change the passcode on your computers because we will all have access to personal information," warns Stardust. Nothing's scarier than getting hacked, so lock up yo sh*t.

Speaking of privacy invasions, it's not only hackers you'll need to watch out for: It's also yourself and your closest crew. That's right: The risk of falling down rabbit holes of Facebook-stalking your ex for hours or clandestinely reading through your partner's text messages behind their back are high, and it might not be (read: almost never is) a smart choice. "Beware of the lure of research during this Mercury retrograde period," wrote Pandora Astrology on its site. "It’s possible to get caught up in ferreting out information to the point of obsession." Yikes.

All in all, we should definitely expect all the Mercury-ruled areas of our lives to take on an emotionally-fraught, intense, and sensitive nature. "We will also deep dive into our emotions and discuss feelings on an intense level," explains Stardust. We might especially see Mercury RX struggles when it comes to the most private and personal areas of our lives, which includes money, our sex lives, and our closest emotional contacts. "Mercury in Scorpio can test you in the deepest regions of intimacy, whether the intimacy in question is emotional, sexual or financial," wrote Pandora Astrology of the upcoming transit on its site.

While a little paranoia during a Mercury retrograde is a good thing (re-read those texts before you send them; double-check meeting times before leaving the house; back up all of your documents and photos from devices), that particularly obsessive brand of Scorpio energy will test us during this backspin when it comes to emotions and communicating. We may feel tempted to wield our poison stingers when it comes to having tough conversations, or be lured into the trap of jealous, obsessive paranoia. That said, we should resist the urge to allow our negative impulse reactions to show themselves without taking the time to think them through first. "If you have any of these kinds of conversations during Mercury retrograde in Scorpio, keep it kind," advised Pandora Astrology. "Accusations and blame will only intensify the problem."

Remember that Scorpio is known for its dignified, controlled, and quietly-in-charge nature. No matter how chaotic this frightful Halloween astrological sitch might make you feel, try to call upon that distinguished side of Scorpio's energy and pace yourself before you tumble into a Mercury-retrograde-fueled emotional fire. Mercury RX Halloween might be scary, 'tis true, but if we embrace the nature of the transit, we'll find that it can help us to dive deep into emotions, bring important truths to light, and help us move forward with clarity and honesty. Bring it on.

More like this
Your Ultimate Guide To Jupiter’s Annual Retrograde
By Brittany Beringer
How Jupiter Retrograde 2022 Will Affect Your Zodiac Sign
By Brittany Beringer
August’s Astrology Includes Uranus Retrograde & A Rare Taurus Conjunction
By Nina Kahn
Here’s Your Daily Horoscope For August 8, 2022
By Mecca Woods
Get Even More From Bustle — Sign Up For The Newsletter