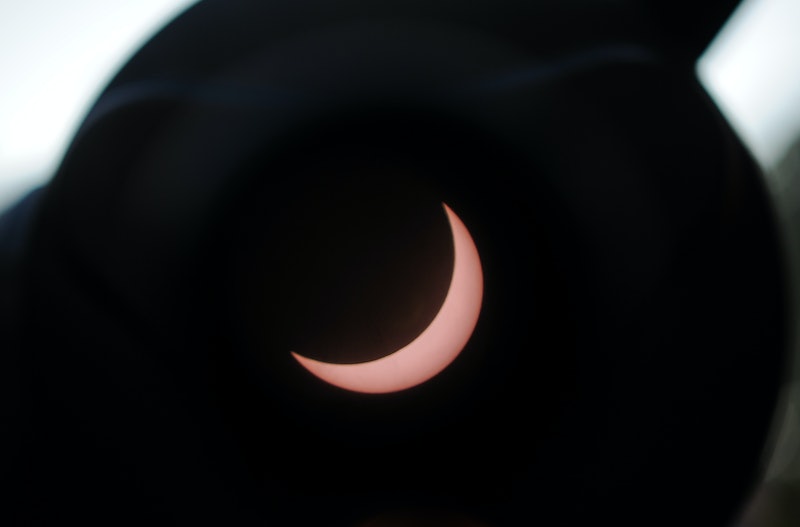 Historically, nothing has a tendency to shake things up and create more sense of uncertainty than a major natural phenomenon. And, as people around the world prepare for Monday’s solar eclipse, 2017 is certainly no exception. Put that way, it makes total sense in many ways that superstition about solar eclipses would emerge. It’s not every day that the sun is cast in total darkness. Plus, change is hard, especially when that change is fundamental to how we continue to exist on this planet. Hello, sunlight? Kind of important!

One of the coolest things about watching history unfold as we all will next wee, is learning about how it’s played out over the decades and centuries that’s preceded it. What’s curious about eclipses however, is how different cultures around the world have viewed and interpreted this phenomenon — mostly as a bad and ominous omen. According to Hindu mythology, for instance, a demon by the name of Rahu was beheaded by Vishnu for drinking the nectar of the gods, and the belief was that after he was beheaded and his head flew by the sun, it actually swallowed it up... causing total darkness. There’s even a reference to an eclipse in Homer’s Odyssey, which describes it as an “evil mist that has overspread the world." In that vein, the Ancient Greeks believed that it meant the Gods were angry and an eclipse marked the beginning of disasters and destruction.

The list goes on, so suffice it to say, every culture has their own unique set of superstitions and folklore associated with a solar eclipse, and not surprisingly — since they had no idea what was going on — have interpreted them as a sign of something slightly more sinister.

While solar eclipses are nothing new (they date back to the first recoded incident in 1375 BCE), thanks to the achievements of modern day science we now know a solar eclipse is actually caused by the moon blocking the path of the sun thereby casting a shadow on earth. But. before we understood the way planets, and most importantly our planet, works within our vastly wide and complex solar system, people around the world had some pretty far-fetched ideas associated with what they thought was happening.

While scientists and astronomers around the world have debunked many of these superstitions, with, you guessed it, science — from the belief that people would turn into mice to birth defects in unborn fetuses and rubbing urine in your eyes, these are some of the downright creepiest superstitions people used to believe about eclipses.

In historical India when a solar eclipse rolled around, women who were on their period were also considered to be especially prone to bad luck and forced to stay indoors. This is, obviously, very false and very offensive.

OK. There could be some validity to this one. I mean, sleeping with wet hair is definitely not ideal. But, is it really enough to drive you crazy? That was one superstition associated with the lunar eclipse according to DNAIndia.com.

While most of us can't go through an eclipse without a Hostess Moon Pie, many cultures in India believed that fasting during an eclipse would save them from impure or poisoned food.

This myth dates back to the Aztecs, and interestingly, many people still hold these superstitions to be true. The superstition here is that a solar eclipse is dangerous to pregnant women and their unborn children due to the harmful UV rays. Scientifically speaking, the most harmful of these wavelengths are deflected by Earth’s atmosphere — however, because of this, pregnant women in many places were forbidden to go outside during an eclipse. If they do go outside, the belief is that an unborn child could develop deformities — despite the fact that most have been scientifically attributed to a mix of genetic and environmental factors that have nothing to do with the solar eclipse.

5. Holding a Sharp Object Can Hurt Your Baby

One of the most common eclipse superstitions is that pregnant women should not touch or handle sharp objects including knives, needles or anything else with a pointy edge out of fear that an eclipse will cause deformities to their unborn child. According to The Old Farmer’s Almanac, even today many baby bloggers and forums ask if pregnant woman should wear some sort of metal, such as a safety pin, to protect their baby. It's believe these superstitions date back to the Aztecs, who thought that an eclipse was a celestial beast biting the Sun — and the same thing would happen to a baby if the pregnant mother dared to watch.

According to one superstition, if a solar eclipse happens to fall within six months before or on your birthday, you will experience bad health. Which is a total bummer for like the gazillion people whose birthday falls anywhere between March 21 and August 21.

7. Children Would Turn Into Mice

This has to be hands down ones of the weirdest and obviously most amazing superstitions in the history of solar eclipses. According to the Aztecs, lunar eclipses might turn gestating fetuses into mice, a theory that was documented by Bernardino de Sahagún, a Franciscan missionary who wrote about Aztec beliefs starting in 1529.

8. No Sex (Unless You Want Evil Demon Babies)

Now this is unfortunate, but in Medieval times, people believed that sex during an eclipse would result in a demon baby, so they put a ban on it altogether while a solar eclipse was in full swing. A modern superstition has resulted from this, which is that a pregnant woman shouldn’t touch her belly during a lunar eclipse, otherwise the baby could be born with a birthmark or birth defect.

9. Rubbing Urine In Your Eyes

Even though urine is technically sterile, rubbing it in your eyes just never seems like a good idea. But, according to DNAIndia, there's a superstition in India that suggests rubbing urine in one's eyes if you don't want to go blind while they gazed up during a solar eclipse.

10. Poison Would Fall From The Sky

According to Japanese folklore, an eclipse was believed to introduce poison into the atmosphere and that the poison would fall from the sky and cover their wells. So, wells were covered to protect their drinking water from whatever would come — and according to Shinto tradition an amulet with a shiny gem was then hung from a tree to compensate for the lack of light. Which actually sounds quite nice, I mean who doesn’t like shiny gems hanging from trees?

This one comes courtesy of DNA India: apparently if you let your children eat banana leaves it is said to cause tooth decay on a lunar eclipse day. Which is a bummer because what child doesn’t crave banana leaves while watching the eclipse?