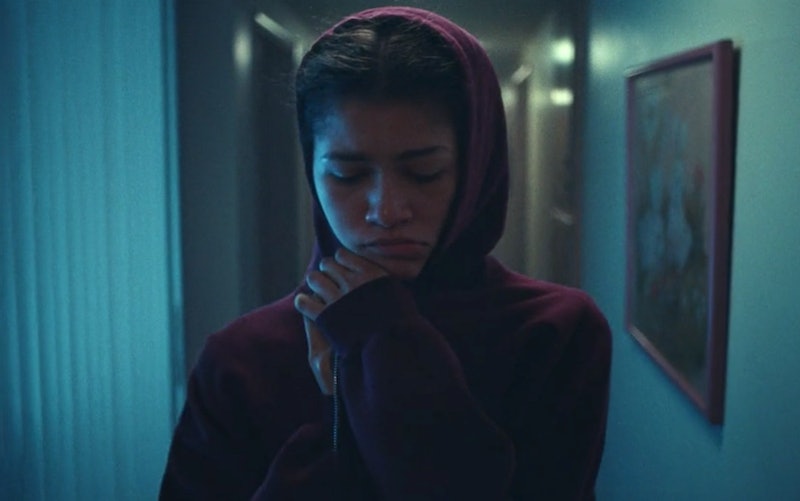 HBO’s Euphoria concluded its first season on Sunday, but fans are still very much reeling over the uncertainties put forth in the heartbreaking finale. In perhaps one of the more painful revelations, viewers learn that the maroon hoodie that Rue dons throughout the season actually has a significant meaning. Now, additional details about Rue’s Euphoria hoodle have emerged post-finale that will absolutely wreck you.

As a refresher, it’s revealed that the maroon hoodie belonged to none other than Rue’s late father, who died of cancer. This heartbreaking revelation came in the form of a flashback when a distraught Rue makes her way home from the train station after Jules’ departure. In the flashback, Rue enters her father’s bedroom after his death and notices his maroon hoodie on the bed. She picks it up, immerses herself in its scent, and leaves the room with it. As she leaves the room, Rue puts it on and continues to wear it throughout the season.

To put it simply, the revelation had fans in tears. The flashback of her dad’s death came right before Rue seemingly relapsed in her room — a plot that was suggested through a stunning song and dance number set against the backdrop of a church choir. While Rue’s fate is unknown, these details about her hoodie will just have to tide you over until Season 2.

1. Rue Has Been Wearing Her Dead Dad's Hoodie The Entire Time

This has already been established, but just let this fully sink in, OK? You'll notice that Rue wears the hoodie in several seasons throughout the previous episodes and it's such a stunning detail. Take a minute if you need.

2. The Hoodie Has Been Worn Since The Pilot Episode

Cue the tears: Rue’s hoodie has been there the entire time. It appears in the pilot episode when Rue is in the car with her mom and sister Gia, and later, when she visits her drug dealer Fez.

3. The Hoodie Is Worn By Rue's Dad During A Pivotal Flashback

In the pilot, Rue’s father can be seen in the maroon hoodie while his wife is in labor with Rue. This means that he wore the hoodie while Rue was born. Send help (and a box of tissues).

In the finale, Jules poked fun about Rue’s consistent wardrobe choices. While preparing for the dance, Jules teased Rue about “usually dressing like Seth Rogen” — although it seems to crush her soul because Rue makes it cute sometimes. She said to Rue, “When was the last time you didn’t wear a hoodie and sweatpants?”

The hoodie might support the theory that Rue is, in fact, dead. In the dance sequence at the end, Rue dons the maroon hoodie as her late father pulls her in for a hug and kiss. As Twitter user @gdasavage8 has pointed out, Rue’s mother and sister Gia are unaware of her presence in the sequence. This could be symbolic of the fact that she’s in the afterlife with her father.

6. Zendaya Wore The Hoodie IRL To Celebrate The Season Finale

Zendaya is also in her feels about the finale. She took to Twitter on August 4 with a picture of herself in the hoodie. “Wore Rue’s hoody today, haven’t worn or washed it since we wrapped,” she wrote. “Safe to say I’m deep in my feels lol”

Which leads to the next point…

Did she take the hoodie from the set? The season apparently wrapped its first season about a year ago. Did Zendaya hold on to Rue’s hoodie for a year? Does it reside in her closet? Did costume design notice it was missing? Is there more than one hoodie? Will it come back for Season 2?!

8. The Hoodie’s Color Is Representative Of Intensity & Passion

According to ColorPyschology.org, maroon is representative of intensity and passion. The color apparently represents “intense and passionate” themes such as love, strength, and courage — all of which are displayed by Rue as she struggles with her addiction and her dad’s loss.

Speaking of its color...

9. The Hoodie Is The Same Color As The Choir Robes

In the final dance sequence when Rue seemingly relapses, she takes to the street where she's accompanied by a church choir donned in similar maroon-hued robes. Given its themes of strength and courage, is it possible that Rue overcame temptation and didn't relapse after all?

The network celebrated the series finale with an official hoodie with the Euphoria logo on it, so now you can wear a piece of Rue and the HBO series.

While Euphoria has been renewed for a second season, there's no word yet on when it will return. Until then, good luck looking at a maroon hoodie the same way again — that is, without bursting into tears.