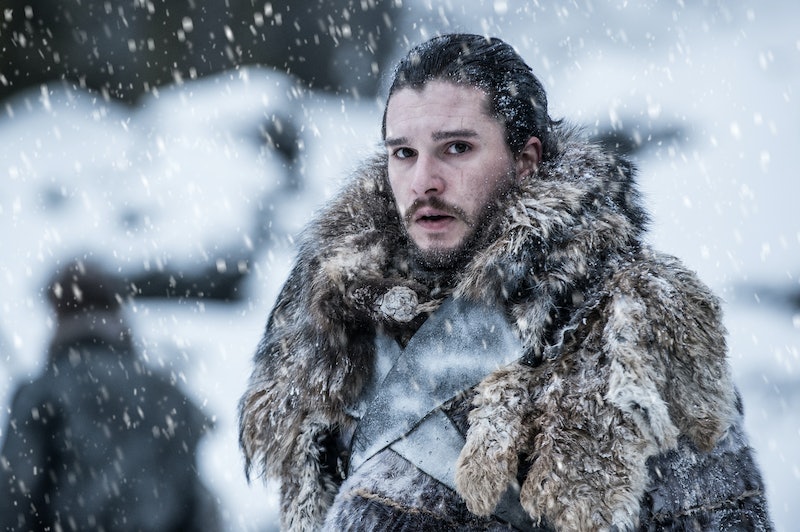 There's just one episode of Game of Thrones Season 7 left, and if that statement makes you want to cry, you're not alone. Thanks to an abundance of dragon fire, a budding romance between Jon and Daenerys, and the return of Gendry, this season has been more exciting than ever before. However, certain parts of Game of Thrones Season 7 made no sense. That's no reason to love the series any less, but the shorter season also led to some logic leaps and lightning fast travel times that left some fans scratching their heads.

Every season has had at least one moment that fell flat — remember all of that sexposition in the first two seasons? — but with just seven episodes, the most recent season hit the accelerator a little too hard. And at times, it came at the expense of the plot and characters. For every awe-inspiring battle scene or long-awaited reunion, there was a moment like Jaime managing to survive being under water in full armor long enough for Bronn to drag him to the other side of a river.

While you wait for the season finale, take a look back at these 11 Game of Thrones Season 7 moments that are super confusing in hindsight.

1. The "Beyond The Wall" Rescue

Was seeing Daenerys fly North with her dragons to rescue Jon and his merry band of wight kidnappers exhilarating? You bet, but it would have been nice for the show not to have to break the space-time continuum to make it happen. Gendry's impressive running skills combined with the fastest raven in Westeros and Daenerys' speedy rescue mission were hard to buy on a show that took six seasons just to get the Mother of Dragons to Westeros in the first place.

Even the director of "Beyond the Wall," Alan Taylor, admitted to Variety that the episode's timeline was more than a bit muddled.

Speaking of implausible rescue missions, what was up with Uncle Benjen showing up out of nowhere to give Jon his horse? Was he hanging out on the sidelines just waiting to see if his nephew would crawl out of a frozen lake? If so, wow, Uncle Benjen, way to wait until the last minute to pitch in.

3. The Night's King & His Massive Chains

OK, this is the last "Beyond the Wall" nitpick, but seriously, where did the Night's King get those chains? Either there is an impressive hardware store beyond the Wall or the White Walkers' craftsmen skills have seriously been underestimated, because no one has chains large enough to pull a dragon out of a frozen lake just lying around.

4. Jaime Survives His Dip In The River

It's not Jaime's survival that's unbelievable. As long as Bronn was in the river with him, the Kingslayer's armor wasn't going to weigh him down for good. The problem is how long he's able to survive under water wearing so much metal. He and Bronn pop up on the other side of the river, at least a mile away from the Loot Train Battle.

Everyone is commending Gendry for his track speed, but someone needs to give Bronn a gold medal for is ability to swim fast enough to keep a fully suited up Jaime alive and far enough away from the battle to avoid being captured by the Mother of Dragons.

Thank goodness the First Men left those detailed cave drawings below Dragonstone, where no one ever goes apparently. High Septon Maynard keeps a detailed account of every single one of his bowel movements, but not one Targaryen ever thought to tell anyone about the White Walker sketches underneath their castle? Then one day Jon just walks into the caves and finds the perfect evidence to show Daenerys he's not making the whole undead army thing up.

Sometime between Uncle Benjen leaving Bran and Meera at the Wall and the two actually making it past the gates, Bran completely transformed into the Three-Eyed Raven. Now, maybe he spent that window of time adsorbing so much information he lost all sense of himself, but after the Hodor incident he was still Bran. Watch his final scene in Season 6 again: Bran thanks his uncle, and he's not doing his whole "stare creepily off into space when someone is talking to you" thing.

By the time he gets to Winterfell, he's so out of it, he reveals his new Three-Eyed Raven abilities by telling Sansa that he saw her getting married to her abuser, Ramsay. Knowing everything is a burden, for sure, but at what point did it completely destroy Bran's ability to communicate like a normal person?

Jon Snow's very own Suicide Squad was cool, but venturing beyond the Wall to capture a single wight from a horde of the undead was a flawed plan at best. And it's unlikely to make Cersei Lannister any less inclined to kill them all when they step foot into King's Landing.

Sheeran is just one of many musicians to appear on Game of Thrones, but he happens to be the most recognizable of them by far. Sadly, that made his guest spot a glaring distraction for most viewers.

9. The Highgarden Loot Actually Making It To King's Landing

Daenerys' show of force stripped the Lannister army of its food, but the gold made it safely to King's Landing before she ever arrived on the scene. Sadly, this detail was tossed out in a line of exposition from Randyll Tarly of all people right before the battle began. That guaranteed that many fans were left confused about the status of the gold, and the logistics of how it ended up in King's Landing while what looked like the entire Lannister army was still hanging around outside of Highgarden.

Having The Hound back in the game is a gift, but is the Lord of Light just chatting with everyone now?

11. No One Sees Euron Coming

Both Euron and Yara's fleets feature the Greyjoy sigil, but did not one of Yara's people see Euron's ships sailing towards them? Yes, it was night, but given the importance of the mission and the proximity to King's Landing, someone should have been watching for ships heading their way. And not being battle-ready was foolhardy on the Greyjoy siblings' part, to say the least.

For all of its plot holes and time discrepancies, Game of Thrones Season 7 has still been an exciting and addictive ride. As long as Arya and Brienne can spar, Daenerys can continue to be boss, and Cersei never stops plotting, forgiving the show for its missteps will be easy.