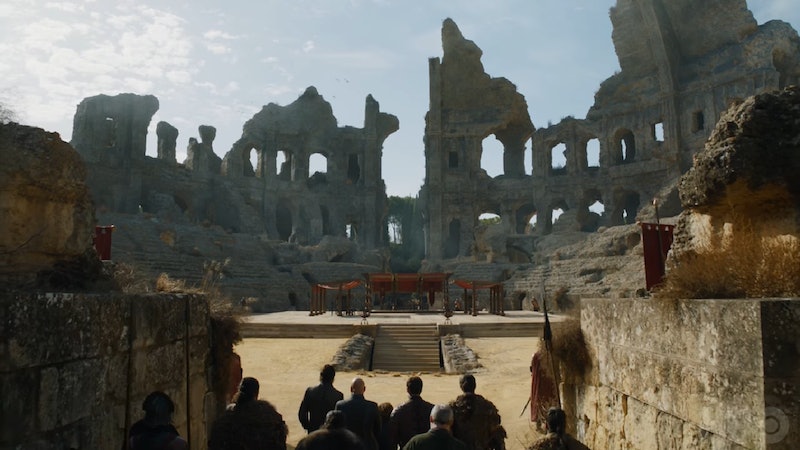 Season 7 has introduced fans to a number of never-before-seen locations, including Casterly Rock, Highgarden, and Eastwatch-By-The-Sea. And the show's penultimate season is saving one of the most significant locations for last: the Dragonpit. But what is the Dragonpit on Game Of Thrones, and why is it so important? The building's history stretches back hundreds of years, well before Queen Cersei and King Jon and Queen Daenerys all chose to use it as the setting for their unlikely armistice… and its bloody past doesn't bode well for "the dragon and the wolf" referred to in the finale's title.

King's Landing is famous for its three tall hills, each named after one of the Targaryen sibling-spouses who conquered the Seven Kingdoms: Aegon's High Hill, on which the Red Keep was built; Visenya's Hill, on which the Great Sept of Baelor was built (before Cersei blew it up); and Rhaenys' Hill, on which the Dragonpit used to stand. When it was whole, the Dragonpit was a giant domed structure used to house the Targaryen family's many dragons. It was so big that 30 knights could ride through the bronze front gates side-by-side, and large enough inside to hold at least four adult dragons at a time — although the dragons raised in the confines pit never reached the full fearsome size of Balerion the Dread.

The glory of the dragonpit came to an end during the civil war known as the Dance Of The Dragons, the conflict that pitted Targaryen against Targaryen over the right of succession after the death of King Viserys I. As sibling fought sibling from dragonback, much of the realm burned in the crossfire; the Dance is said to have been one of the bloodiest in terms of civilian casualties… and eventually, the smallfolk had had enough.

Led by a self-professed prophet of the Faith known only as the Shepherd (sort of a proto-High Sparrow), a mob of crazed commoners marched on the Dragonpit with torches and rams and axes to put an end to the deadly beasts that were spreading so much death across the realm. By the end of the night, once the Storming of the Dragonpit was complete, hundreds if not thousands of smallfolk were dead — but so were five dragons. (Only eight dragons have been killed by humans in known Westerosi history, including those five.) As one dragon tried to escape the carnage, it broke from its chains and collided with the ceiling, sending the great dome crashing down and killing everything beneath it, including the dragon.

But the location's sordid history extends both before and after the Dance Of The Dragons. Before the Dragonpit was even constructed, the spot was originally home to the Sept of Remembrance, which was built in memory of the Targaryen queen who gave Rhaenys' Hill its name, who was lost during First Dornish War when her dragon, Meraxes, was shot down by a scorpion bolt much like the one that grounded Drogon during the Loot Train Attack. But when the Faith Militant rose up against the Crown, King Aegon used his dragon Balerion to burn the Sept to the ground and crush the rebellion. The Faith Militant was outlawed (until Cersei resurrected them for her own purposes) and the Dragonpit was raised on the Hill in the Sept's place.

Many decades after the destruction of the pit, it once again became the site of much death during the Great Spring Sickness that struck King's Landing, a plague that killed one in four inhabitants of the city. There were too many corpses to bury, so the dead were simply gathered up by the score and dumped inside the ruins of the Dragonpit. When the bodies were stacked 10 feet high, the Hand of the King ordered the pyromancers to burn the dead with wildfire. Ever since then, for more than a century, the great bronze doors of the Dragonpit have remained sealed… until now.

(Speaking of wildfire, it is also specifically mentioned in George R.R. Martin's novels that a large amount of Mad King Aerys' cache of the volatile substance still resides in the tunnels beneath the Dragonpit. Foreshadowing of another catastrophe on Rhaenys' Hill?)

If you can't tell, the Dragonpit is not a place where good things tend to happen; so it doesn't bode well that Season 7's climactic tête-à-tête will be taking place there. Its history as a place where dragons have been slaughtered — as well as its connotations with the Faith Militant and wildfire — may mean ominous things for both the Mother of Dragons and the woman who burned down the Sept of Baelor.

Fortunately, this time the dragon has the wolf by her side, while the lion stands alone. The events of the Season 7 finale are bound to be momentous… but hopefully Jon and Dany manage to evade an explosion of wildfire, a slaughter by the smallfolk, a deadly epidemic, or any other threat that may come their way in the Dragonpit.