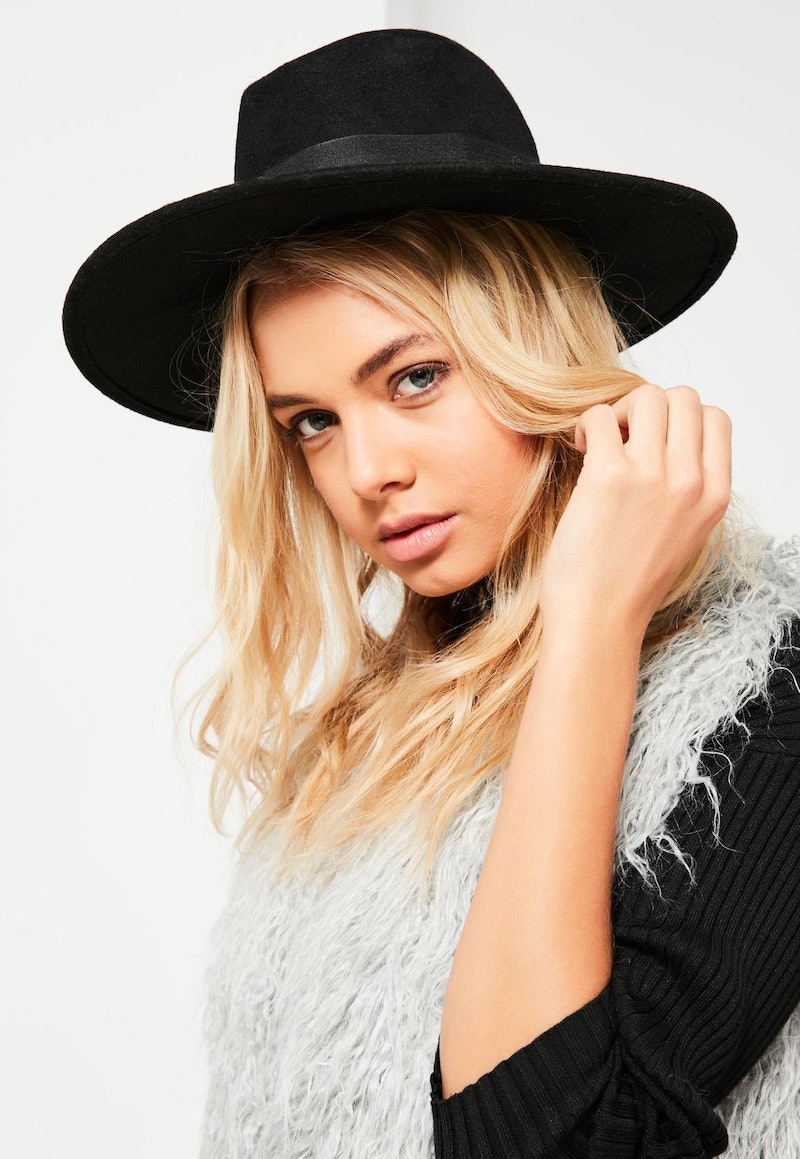 PSA to future attendees of Coachella/Outside Lands/Bonnaroo/insert other cool music festival: please, for the sake of the sartorial world, leave the flower crowns at home. Naked tresses are no fun, but neither is sporting a festival cliché for the fourth year in a row. So, where's the happy medium? Hint — it can be anything sans floral garlands. Anything, from '60s-inspired toppers to the safe and sound fedora. Time to polish up those packing lists and study the best hats to wear to 2017 music festivals.

Whether you'll be team bohemian bedhead or going au naturel, always make sure to seal your music festival hairstyle with some form of headgear. Not only do hats offer a haven from the sun, but they can elevate an ensemble from failed Pinterest idea to pure Vanessa Hudgens status — and that's how you know you've officially made it in the world of festival fashion.

I'd sooner hop on the Pilgrim hat aesthetic then be caught with a daisy flower crown, but maybe I should first focus on actually nabbing a festival ticket (yeah, just maybe). I mean, when else would I get an excuse to give my felt fedora and fringe vests a spin? Certainly not on my 11 PM run to Duane Reade for coconut water and paper towels.

With "Dad Attire" currently sweeping the nation, there is no surprise that the once frumpy baseball cap is now making a suave comeback. One can never go wrong with a good 'ol plain denim cap, perfect for a relaxed feel.

Fact: a music festival fashion round-up is not complete unless a fedora is somehow involved. Partly responsible for the aforementioned Puritan aesthetic/why Coachella is essentially a modern day Mayflower.

I still can't think of visors without experiencing traumatic flashbacks to the sideways visor trend of the early 2000s — the horror, the horror. Luckily, visors nowadays have been blessed with a sophisticated update. Spare no mercy for the plastic neon variety.

Channel the wild West with a felt boater hat — bonus points if with a patterned fabric band.

Rule number forty-six of festival dressing: the floppier, the better.

Pay homage to the psychedelic '60s with a military-inspired cap. It's got a vintage throwback going on, and may or may not cause you to groove out to some Tame Impala/Fleetwood Mac tracks.

Once upon a time, bucket hats were an embarassing relic of my '90s childhood. But in 2017? They're suspiciously stylish and actually music festival-approved.

When all else fails, simply throw on a printed baseball cap — it's all about the casual cool.

When Jurassic Park meets Coachella — it's all about channelling the laidback vacay vibes.

Because one can never have too many fedoras for Coachella and festivals to come. Stock up, friends.

May flower crowns forever be laid to rest.