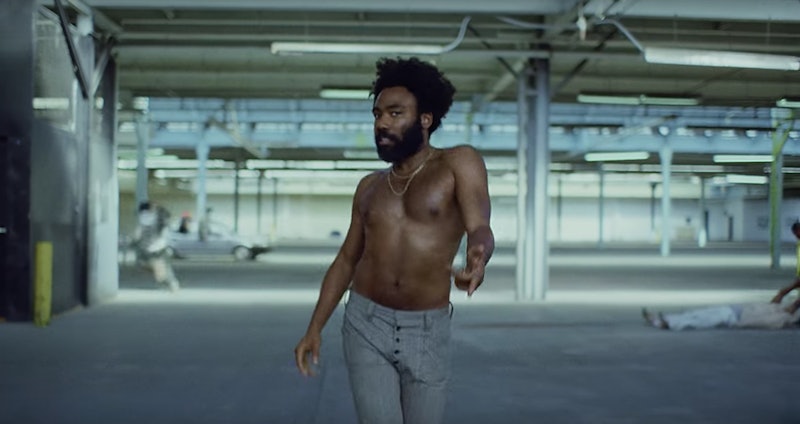 Childish Gambino's new video for "This Is America" is dominating social media for all the right reasons. The controversial, four-minute video is a stunning yet devastating portrayal of America's current state. When watched closely, viewers will see how it's brilliantly layered with messages about police brutality, gun violence, racism, social media, and black culture. "This Is America" is brimming with commentary on polarizing issues in this country, which is why so many fans are commenting about watching it multiple times to catch all of the messages in Donald Glover's new video in an attempt to fully grasp its impact and meaning.

The video features a shirtless Glover dancing around a warehouse while chaos ensues in the background. From mindless murders, silent onlookers, and mobs of police, each frame is packed with substantial detail — some of which is hard to watch — that accurately portrays the country's seeming ambivalence to the violence that's happening every single day. Directed by Atlanta director Hiro Murai, and including a cameo by SZA, the video has garnered over 20 million views in just two days. Glover's SNL performance of "This Is America," which has constant police lights flashing and kids dancing around him, was just a preview of what was to come in the even more substantial music video.

"This Is America" could be analyzed endlessly, and these details that Twitter can't stop talking about are a great place to start unpacking the loaded video.

The video opens with Glover's character executing an innocent black man who's playing the guitar. Twitter users have commented on the fact that the gun used in the murder is treated with more care and attention than the dead body, which is left out in the open and later dragged away. Additionally, the video portrays that gun violence is happening everywhere, all the time, yet people are numb to it and distracted from it.

Throughout the entirety of the video, policemen swarm around ignoring or carelessly dealing with deceased black bodies while violence ensues. At the end of the video, there is a sea of unattended cars with their doors open, which, fans have pointed out, could be a symbol for black citizens like Philando Castile, who have been pulled over and shot by police.

While disturbing events take place in the background, Glover obliviously dances around, sometimes with a group of others, masking what's really going on. At certain points, the distraction mechanism actually works and will take viewers away from the important messages, which seems to be the point. Fans have pointed out how this could symbolize America's attention span, carelessness, and avoidance of important issues.

As fans have pointed out, Glover's dancing offers more of a message than showing America's distraction: It points out what's important to American citizens. The symbolism suggests that people are much more concerned with being entertained than dealing with reality. Silly dance moves seem to go viral and garner attention more than the loss of innocent lives.

At one point in the video, the camera pans over a group of kids who are watching the violence go on and are documenting it on their phones. Meanwhile, their mouths are covered with cloth and they remain silent. According to Twitter, the chilling picture seems to show how people witness murders, inequality, racism, and violence, and are willing to document it for the sake of views without speaking up and actually taking action.

Twitter users are also talking about how, throughout the entirety of the video, Glover wears pants that are strikingly similar to those worn by the Confederate States Army. He also wore similar pants in his SNL performance of the song.

A scene in the video shows an all-black church choir happily singing and worshipping until Glover shoots them all in the matter of a second. Many have recognized this as a reenactment of the Charleston shooting in June 2015, when a white supremacist murdered nine African Americans in a church. Once again, the gun is handled with special care while the bodies just lie there.

On Twitter, Dear White People creator Justin Simien pointed out that before Glover's character shoots and kills a man in the beginning of the video, he strikes a pose, while holding his gun, reminiscent of Jim Crow. Created by a white man in the early 1800s, Jim Crow was a derogatory character who was played by white people in blackface, and designed to mock black people and segregation while providing entertainment for white people. Jim Crow laws enforced racial segregation in the southern states following the Civil War.

The man who is murdered in the opening shot looks just like Trayvon Martin's father, which caused many Twitter users to accidentally think it was him. Although the person in the video is actually musician and actor Calvin The Second, fans are still drawing comparisons.

Viewers who weren't too mesmerized by Glover's intentionally distracting dance moves noticed a figure in all black riding on a white horse and being followed by police. The imagery symbolizes the Biblical concept of the Four Horsemen of the Apocalypse.

Lyrics to "This Is America" express that being completely innocent in America could still get you killed. In the video, murdering innocent people is done without punishment or repercussions, and ironically, Glover finds himself running from the police after getting caught lighting a blunt of weed, while the killings at the beginning of the video go unpunished.

The video is not only groundbreaking. It's eye-opening, necessary, and most horrifying of all, it's real, as so many Twitter users' insightful tweets have pointed out.