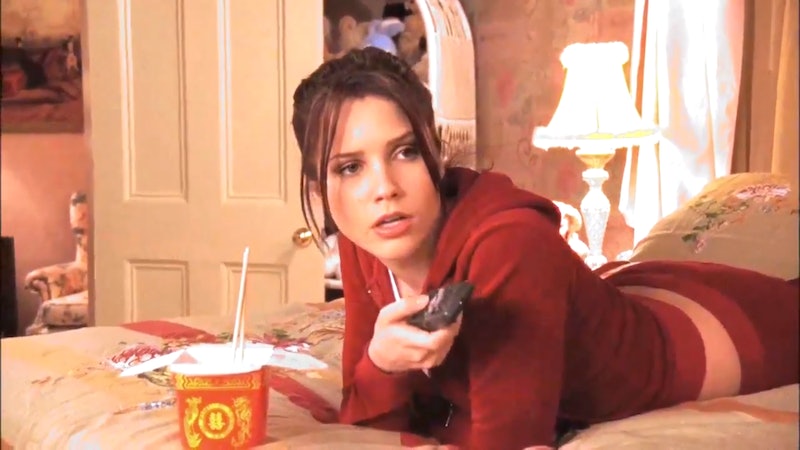 So many wonderful things came out of One Tree Hill — Brooke Davis, Haley and Nathan's romance, and the mesmerizing sight of Chad Michael Murray playing basketball. That being said, even the show's most ardent supporters have to admit One Tree Hill featured some super cheesy moments during its nine season run. Basically, anything involving Dan and his over the top, mustache-twisting antics was known to cause excessive eye-rolling from viewers. Since the show is a teen drama, it was oh-so easy to eat up all of the glorious nonsense when you were young, but as an adult viewer it's hard not to cringe at moments like Dan's donor heart being eaten by a dog. (No, you didn't dream that. It's a thing that actually happened.)

Part of loving a show is recognizing the parts that don't hold up quite as well as you remember. And One Tree Hill has more than its fair share of these moments. From spontaneous in-show sing-alongs to the theme song to a crazed nanny straight out of a Lifetime movie, this is one classic teen show that was unafraid to serve up drama with a giant platter of cheese. No matter how much you adore One Tree Hill, reminiscing about these moments will probably make you cringe now.

Dan is the worst. He will always be the worst. But having a dog eat his donor heart right in front of him is one of the silliest things to ever happen on TV. No one even goes after the dog. This scene is truly mind-boggling in its badness.

2. Nanny Carrie In The Corn Field

Everything involving the nanny Haley and Nathan hired to watch Jamie was at least a little cringe-worthy, but seeing Carrie go full horror movie villain in a cornfield took the cheese to a whole new level.

Nathan's Season 9 kidnapping felt like it belonged on Criminal Minds, not One Tree Hill. The generic accents of his kidnappers and having Dan, of all people, come to the rescue didn't help matters.

4. The Cast Sings The Theme Song

"I Don't Wanna Be" is the perfect theme song for the show. Just because it's perfect that doesn't mean Gavin DeGraw and the cast needed to have an in-show sing-along. The whole scene was too on the nose to work.

Crazy Dan strikes again. The moment when he tries to choke his son after making an awful Oedipus joke should have been one he couldn't come back from.

Deb literally climbs out of a window using tied together bed sheets to escape rehab. The scene manages to be both silly and unsettling when the nurse simply tells her it's a voluntary program and she can sign out whenever she wants. One would think crawling out of a rehab center window would be seen as a cry for help, but not on One Tree Hill.

The number of times that characters wander in and call him "Pete from Fall Out Boy" does not help ground the relationship between Wentz and Peyton in reality. If anything, it just makes the whole thing even weirder.

Taking on mean girls is a noble cause, but dressing up as spandex-wearing superheroes is an odd way for Brooke, Haley, and Quinn to get their point across.

9. Haley Puts Everyone Through A Delivery Test

Haley briefly turned the show into a slapstick sitcom when she put everyone through an emergency labor test. Brooke throws her keys down a vent and Julian faints. The silliness is strong with this scene.

It's no secret that the girls of One Tree Hill got in their share of fights, but the giant pool brawl was one of the most embarrassing fights of them all.

The show briefly ventured into fantasy territory when Clay and Quinn end up in a shared beachfront paradise after being shot by Katie. The scenes featuring the two enjoying quality time by the ocean while they're actually fighting for their lives straddles the line between silly and heartbreaking in a way that One Tree Hill perfected.

One Tree Hill may have been cheesier than movie theater nachos sometimes, but that was all part of its appeal. For better or worse, this teen drama always kept you watching to see what would happen next.