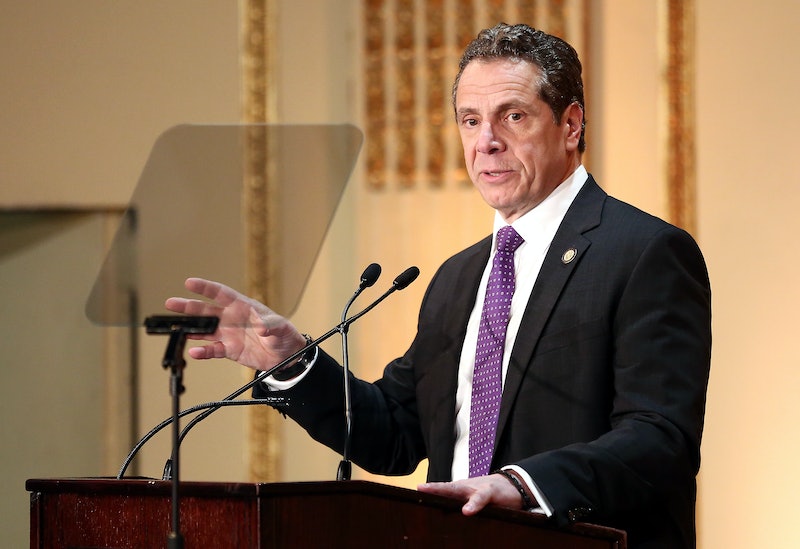 Although President Trump announced Thursday that the United States would withdraw from the Paris climate accord, world and U.S. leaders aren't backing down from the climate change fight. The president's decision came shortly after last week's G7 summit in Italy, where the president refused to join the group's consensus on upholding the Paris climate agreement, which was approved during the Obama administration. After Trump's hesitancy last week, the decision wasn't much of surprise — but the response from U.S. leaders to support the Paris agreement is at least encouraging.

On the international front, several world leaders condemned the U.S. withdrawal. According to The Hill, the leaders of France, Germany, and Italy issued a joint statement on Thursday in obvious opposition to the U.S. president's decision. In the statement, they reportedly called the agreement "irreversible," and said that it "cannot be renegotiated," as Trump had vowed.

Back in the United States, Trump faced similar condemnation. The Weather Channel fired back at Trump's announcement with a series of brutally honest headlines, while Tesla founder Elon Musk announced that he would leave Trump's advisory council. In the public sector, leaders at the state and local levels also announced plans for their own rebuttal to the president's controversial climate change decision.

For his part, Brown called the U.S. Climate Alliance "a profoundly important endeavor." In a statement, Brown called the president "AWOL" for his decision. It wasn't the first time Brown had criticized Trump for his action on climate change.

The Washington governor echoed the sentiments of Cuomo and Brown. Additionally, Inslee shared his state's record on climate change through a Medium post. According to the post, Inslee has met with Canadian Prime Minister Justin Trudeau and Mexican President Enrique Peña Nieto, among other initiatives.

The Massachusetts governor vowed to "exceed" the goals set forth by the Paris agreement. He also called climate change "a shared reality" that Massachusetts and the world must respond to.

President Trump won Pennsylvania in last year's election, but on Thursday, he certainly didn't have the support of its governor. Gov. Tom Wolf tweeted that the president "abdicated America's leadership in the world" with his decision to leave the Paris deal. He also mused that the decision would make it harder to boost the energy economy, one of Trump's key campaign promises.

The mayor of Pittsburgh promised to uphold the Paris climate accord, despite Trump's decision to withdraw from it. Peduto is part of a mayoral group called Climate Mayors, which brings city leaders together in an effort to mitigate climate change at the local level.

The Los Angeles mayor, who helped to found the Climate Mayors group, also condemned Trump's decision. Like Peduto, Garcetti promised to uphold the Paris climate accord in his city. In total, at least 60 mayors vowed to make the same commitment, according to Garcetti.

The representative from California tweeted that Trump "does not speak for all Americans."

Lieu also represents California in the U.S. House of Representatives. With leaders at the congressional, state, and local levels criticizing Trump's decision, California seemed particularly unified in support of the Paris accord.

While the president can remove the country from international agreements like the Paris deal, he can't exactly dictate the agendas of other lawmakers. If states and cities uphold the Paris deal, then the U.S. climate change agenda may live to see another day, despite Trump's controversial announcement on Thursday.