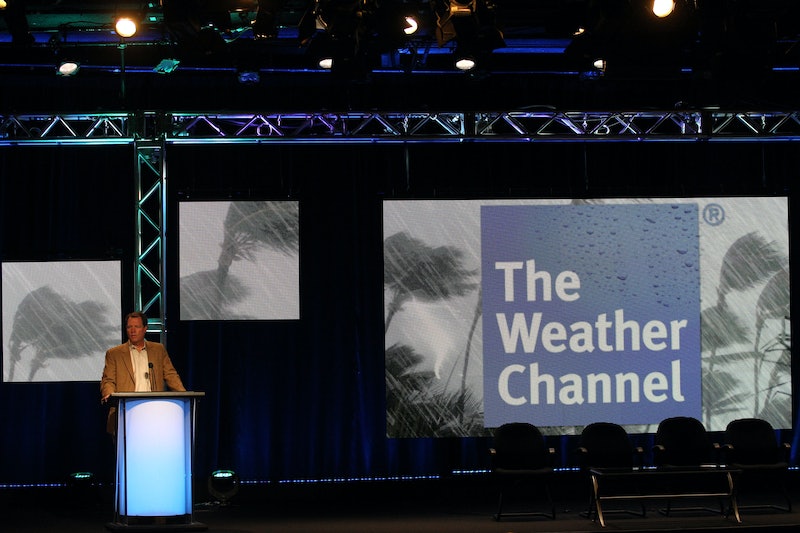 After days of speculation, President Trump announced Thursday that the United States is pulling out of the landmark agreement that brought nearly 200 nations together to fight global warming. Though expected, Trump's decision was met with swift outrage — but perhaps none as wrathful as The Weather Channel's coverage of Trump's Paris climate accord decision.

The website's homepage featured the live-stream of Trump's announcement, then proceeded to list, in several different clips below, the consequences of withdrawing from the accord — the disappearance of California's coast into the sea, the imminent collapse of a major ice shelf, and Antarctica turning green, among others.

In his Thursday announcement at the Rose Garden, Trump suggested that leaving the non-binding Paris accord would help boost the American economy.

"This agreement is less about the climate and more about other countries gaining a financial advantage over the United States," Trump said.

Although he often railed against the climate accord on the campaign trail, after he took office, Trump was reportedly conflicted over whether to withdraw from the agreement. Several media outlets reported in the days leading up to the announcement that the president was weighing arguments from two distinct camps in his inner circle — one (including his daughter Ivanka and her husband, Jared Kushner) urging him to stay, the other (reportedly led by Steve Bannon and EPA head Scott Pruitt) pressing him to withdraw.

After Trump's announcement, The Weather Channel went the extra mile to highlight the devastating consequences of climate change in its coverage. The website has never shied away from asserting its stance on climate change and confronting skeptics; last year, for example, meteorologist Kait Parker took Breitbart to task for misrepresenting a Weather Channel video about La Niña in an article arguing that global warming was ending.

Signed by more than 170 nations in 2016, the Paris climate agreement was a historic deal that signaled the world's commitment to fighting global warming. But within the United States, where climate change is a singularly contentious political issue, many pushed back against it — including Trump, who frequently called it an "unfair" deal for the country.

The decision to withdraw from the accord reinforced the fear of the administration's anti-science positions on crucial issues. Trump himself has tweeted about his skepticism of climate change more than 100 times, and following the announcement, White House officials reportedly could not say if Trump believed in climate change.

But perhaps the administration understands that it may not be around to suffer the blowback from pulling out of the Paris climate accord. According to BuzzFeed News, the rules of the agreement stipulate that the United States can only formally notify the United Nations of its withdrawal three years after its official implementation, and then wait another year to formally exit — which coincidentally, fall two days after the 2020 election.