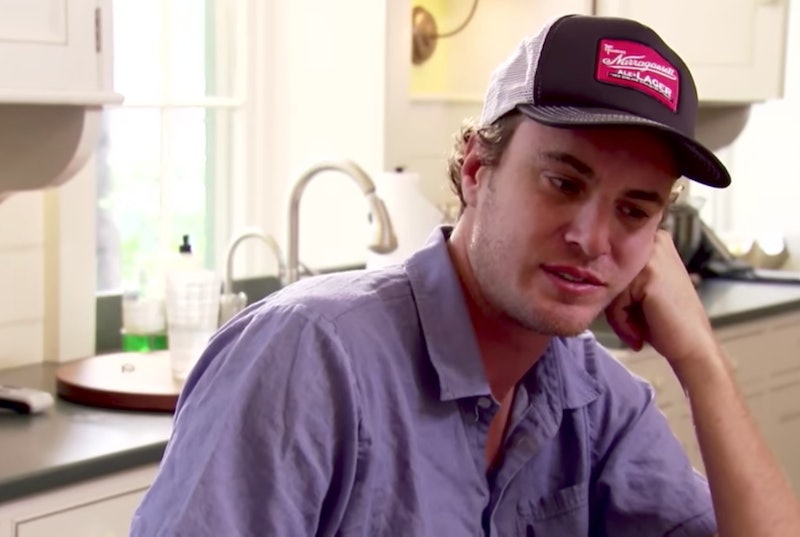 Oh, Sheppy. If you're a fan of Southern Charm, then you most likely adore Shep Rose and really hope that one day he'll find his one true love. If you haven't heard, the 37-year-old reality star was even granted his own show that will potentially match him with his forever person. It's called, appropriately, Relationshep. As excited as I am for the spinoff and to see his journey, I think there is a high chance that Shep Rose might not find love on his new Bravo show.

According to the show description, the series will follow "Charleston’s most eligible and loveable singleton, Shep Rose, as he ventures to various cities across the country in the hopes of finding true love and a committed relationship." Throughout the show, Shep will ask friends to set him up on dates.

Don't get me wrong, I'm a huge Shep fan, but that doesn't mean I agree with everything he does and says, especially when it comes to women. As much as I want him to find love, I refuse to get my hopes up about his show. I mean, does anyone really believe that another TV show is going to unite Shep with the woman he's supposed to spend the rest of his life with?

I'm not trying to be a downer or to hate on Shep whatsoever, but I'm only being realistic. He still has a lot of growing up to do and based on his actions throughout his duration on Southern Charm, well, Shep doesn't seem like he's going to settle down anytime soon. With that, here are a few more reasons why Shep will probably still be single after Relationshep.

1. He Fears "The Monotony of Monogamy"

During Southern Charm Season 4, Patricia Altschul hosted a small dinner party, where a psychic gave readings. Upon Shep's turn, Naomie Olindo asked, "Will Shep ever be married?" To that, the psychic answered, "Even though he doesn't want marriage right now, his fear is being alone for the rest of his life."

Of course, Shep disagreed and replied, "I respectfully disagree, my fear is monotony and being with someone else for the rest of my life. The monotony of monogamy." A person looking for a serious relationship isn't going to want someone with that type of attitude, and it sure isn't going to lead Shep to his person.

2. The Psychic Said So

The psychic also told Shep about whether or not he'll ever get married, "It's not going to be anytime soon. You're not marriage material right now." Need I say more?

3. He Can't Be Honest With Himself

I agree with the psychic that Shep's true fear seems to be that he's afraid he'll be alone forever. If he could just admit that and be honest with himself, that would be a huge step for him. Not only would it show growth, but it would show that Shep is truly serious about pursuing a long-term relationship.

4. He Gave Up On Chelsea

Shep had a small window of opportunity to truly pursue Chelsea Meissner, but he didn't. Yes, after his return from being away for a wedding, he discovered that his good friend Austen Kroll and Chelsea were hanging out. Though, it wasn't anything serious at the time and rather than expressing how he felt about Chelsea to Chelsea, he just gave up. Those actions aren't going to get Shep a serious girlfriend. Even Cameran Eubanks couldn't believe how easily Shep just walked away from Chelsea.

By no means is Chelsea an object that should be competed for, but the fact that Shep didn't even try to express himself to her up front shows he isn't really that serious about finding love.

5. His Partying Ways Need To Change

Season 4 is the first time fans have seen Shep stop drinking for short amount of time, because the doctor told him to. And as viewers saw, it didn't last for long. Furthermore, when he missed an appointment he had scheduled with Cameran, she showed up to his apartment and found him and his home like this. Yeah, his party boy ways need to stop immediately or Shep really will be alone forever.

6. He Claims Territory Over Women

Viewers saw this with Kathryn Dennis in Season 1 and it's something Shep continues to do. Even when he's not dating someone, he doesn't want anyone else seeing them. Did he like Chelsea first before Austen? He did, but he and Chelsea were never serious and never really had an "official" date. Yeah, maybe Austen should have gone to Shep and told him what was going on between himself and Chelsea, but the way Shep handled it wasn't the best. Basically, he was jealous and was mad at himself for not moving fast enough.

Also, I don't know why Shep was complaining about Austen and Chelsea in the first place. While those two were getting to know each other, Shep was off in New England, where he met a woman who he described to Whitney Sudler-Smith as "hot." He didn't seem to be concerned about Chelsea while checking out other women. Again, he and Chelsea weren't dating, but still.

7. He Can Never Admit When He's Jealous

Shep can't stand it when he gets jealous. So much so, he can't admit when he's jealous — ever. Just take a look at the above video to see it for yourself. If he can't express his true feelings or admit the honest truth about himself, then how will he ever be in a relationship?

Come on, Shep can be totally immature. Remember that time he desperately wanted Landon and Austen to be flirting, because he envied Chelsea and Austen's relationship? That showed his true maturity level. Acting like an adult is key in sustaining a serious relationship.

I'm a big believer in looking forward and not to the past. That said, Shep does have quite the reputation. As Chelsea once said, "His reputation precedes him." There's no doubt Shep has been with a lot of women, but that isn't the issue. The problem here is that he's never proven himself to be someone who can date one person at a time or for a long period.

I will never understand why anyone goes on TV to find love. How often does anyone find forever love on The Bachelor and The Bachelorette? There are a few, but the track record isn't great. And Relationshep sounds like a traveling Bachelor.

TV is seriously the worst possible place to find that special someone. Are these people really falling for each other? Is it all for the cameras? Do they feel pressure to find someone? There seems like a lot of downsides to it. Seeing as Shep is used to reality TV, well, maybe it will out for him in the end, but I'm not convinced just yet.

Shep has yet to show he's serious about settling down, so until that happens for real, a longterm relationship isn't going to work.

It would be wonderful to see Shep happy and in love, so here's hoping he proves me wrong.