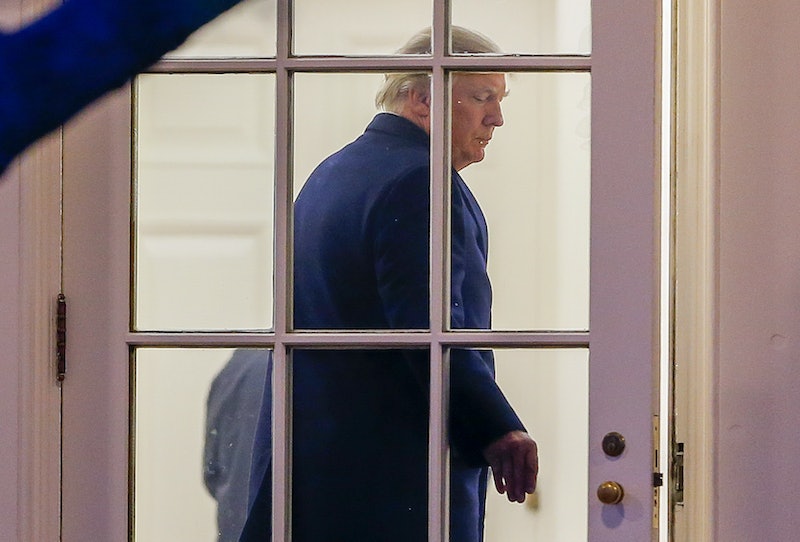 President Trump may have called a federal court's decision to block the latest version of his travel ban "the sad news," but folks on Twitter are finding plenty of reason to laugh. Thanks to a Hawaiian judge's decision that immediately created a nationwide halt to the ban (which would have otherwise gone into effect Thursday), there has been a slew of revised travel ban jokes and memes to enjoy on Twitter. Though the ensuing legal battle may be contentious, at least this is something to celebrate — and laugh at Trump's expense about — in the meantime.

The new consensus on Twitter is that Hawaii is the best state — it has given America surf, sun, President Obama (something President Trump is now likely to not forget), and now, the latest ruling on the revised travel ban. If there was ever a time to recognize all the Aloha State has to offer, it's right about now.

For Trump's part, he has vowed to fight the decision in court, telling a crowd at a Tennessee rally on Wednesday, "We're going to take our case as far as it needs to go, including all the way up to the Supreme Court." He went on to say that he thought the ruling showed signs of gross judicial overreach, and that the second executive order was a "watered down" version of the first one.

Though Trump's odds are not looking good, you may have to wait to see how this pans out in court. But until that (potentially unlikely) day, you at least have the good folks on Twitter to keep you entertained and provoke Trump's ire:

Now, There's Even More Of A Reason To Visit The Aloha State

These are all, obviously, lovely things.

This Question Is Likely To Come Up At A Future Briefing

Sadly, this wouldn't be entirely surprising.

The birther argument will finally come to an end.

Hopefully they don't give it a third shot.

Best Use Of The Felicia Catchphrase Ever

This is so much better than "bye, Felicia."

Aloha Is Such A Useful Phrase, When You Think About It

Or they could just accept the judge's ruling.

So Easy To Get The Two Places Confused, Right?

Trump's birther argument is coming back to haunt him.

At This Point, I Wouldn't Put It Past Trump

Again, this wouldn't be that shocking.

It Certainly Wouldn't Be Out Of Character For The New President

Let's hope it doesn't get this far.

Maybe This Is Why Trump Thought The Ruling Was A Sign Of Judicial Overreach...

Yes, Hawaii is actually a state.

While Trump sorts out his newfound hatred for Hawaii, I'm going to keep the celebration rolling while I can. And Twitter is here to help.

More like this
Twitter Has *A Lot* To Say About The "Single Penalty”
By Sam Ramsden
The Internet Can’t Get Enough Of Viktor & Rolf's Upside Down Dresses
By El Hunt
Twitter Is In Awe Of Taylor Swift’s “Lavender Haze” Music Video
By Jake Viswanath
Twitter Has No Chill As The 'Love Island' Villa Descends Into Chaos
By Darshita Goyal
Get Even More From Bustle — Sign Up For The Newsletter
From hair trends to relationship advice, our daily newsletter has everything you need to sound like a person who’s on TikTok, even if you aren’t.