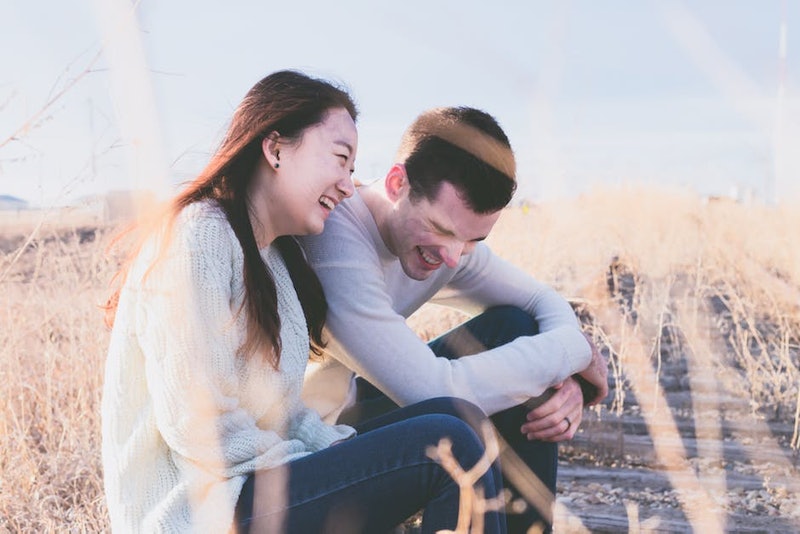 The best case scenario for any long-term romantic relationship? Finding a person who is not only your partner but also your best friend. If your SO is someone who can help you through life while also being awesome to hang out with, then you should count yourself lucky. It is a good idea, however, to watch for signs your partner is really just a friend.

When looking for a true life partner, the whole "friend" thing doesn't always work out. If that's all they are, you might have fun with each other for awhile. But soon there will be a sense that's something's missing. Your "partner" may not be reliable or willing to stick by your side when life gets tough. And that's gonna be a pretty big sign.

If it's still not obvious, though, there is one trait you can look to in order to figure it out. "Friendships and romantic relationships have a lot in common: a sense of reliability, closeness, fun, friendship," couples therapist Evie Shafner, LMFT tells Bustle. "Friendships, or even friends with benefits, share some of these qualities, but not in a committed way — and a sense of commitment is the big sign of a romantic relationship." Once you have that, you know you've got yourself a true partner. But if not, read on for a few more signs below.

1. You Have A Brother/Sister Thing Going On

Of course you're going to be super close with your long-term partner. You probably have inside jokes and are likely a little too comfy around each other. But take note if the only thing you two share are fart jokes. If that's the case, relationship expert Audrey Hope tells me you'll likely notice a "brother/sister" thing going on, as well as a decided lack of romance. It may be a sign you'd be better off as friends.

2. There's A Total Lack Of Passion

A lack of passion is issue that may mean this thing is just a friendship. As speaker and counselor Davida Rappaport tells me, there may be months going by without physical intimacy or any type of affection. If other issues, like depression, have been ruled out, then it may be you've two have simply lost that spark.

3. You're The Only One Making Any Effort

While it's normal for real life to get in the way of nightly dates, take note if it seems like your partner can no long be make an effort. Are you the only one planning dinners and vacations? As licensed professional counselor Kayce Hodos, MEd, LPC, NCC tells me, it's not a good sign if you're the only one putting in the work.

4. You're Simply Existing Next To Each Other

Take a look at your daily routines. Do you zombie walk past each other, each dinner in silence, and watch TV in different rooms? As Hope says, "You get along. You eat together ... But that is the friends zone and not good if you want more."

Friends eat lunch together. Friends call each other to say hey. And sure, friends talk about problems and ask for advice. But couples? They really get into it and communicate. If that seems to have dwindled to a friendly surface level, Rappaport tells me it may be things are a little romantic and a little more platonic.

6. There's No Sense Of Partnership

As Hope tells me, long-term relationships generally have a sense of partnership not found in friendships. This is that feeling of commitment I was talking about above. If you don't trust that your SO has your back no matter what, it may be worth downgrading this thing to friendship status.

7. They Have A Way-Too-Casual Nickname For You

While this is more common at the start of a relationship, take note if your SO is suddenly referring to you on friendly (non-romantic) terms. Does he or she call you by your last name or something decidedly unfeminine? According to health writer Steph Auteri on YourTango.com, this is a pretty glaring sign they see you as a friend instead of someone they want to be with romantically.

8. The Romance Is Gone

Again, romance is something that can simmer down over time. So if your partner isn't bringing you flowers every day, don't panic. Do consider, however, whether or not you're OK with a life lacking in romance. As relationship expert David Bennett says, "The biggest sign by far the relationship is just a friendship is the lack of sexual activity and romantic passion. Romance becomes totally forced and an emotional chore, if it is done at all." Sound familiar?

If you're suspecting whether or not your partner is just a friend, you may catch yourself wondering if they're even interested. As Hodos tells me, a true romantic partner will let you know with their words and actions. If they don't, it may be that your suspicions were right all along.

Obviously relationships are a two way street, so have you checked in with yourself recently? "If you have ... feelings but your partner doesn't or you don't have those feelings but you are trying to talk yourself into it ... stop," Shafner says. There's no point in forcing a relationship when you're just meant to be friends. If you were meant to be together, you'd know.

11. You Both Have Wandering Eyes

It's totally human to check out a hot stranger, but it's not cool if you're both doing it all the time. As Rappaport says, "If you or your partner is doing more than glancing, this may indicate that your relationship has cooled."

If you think your relationship has drifted into the friend zone — or has been there all along — it may be time to let it be what it's gotta be. There's nothing wrong with being friends if that's both what you truly want.