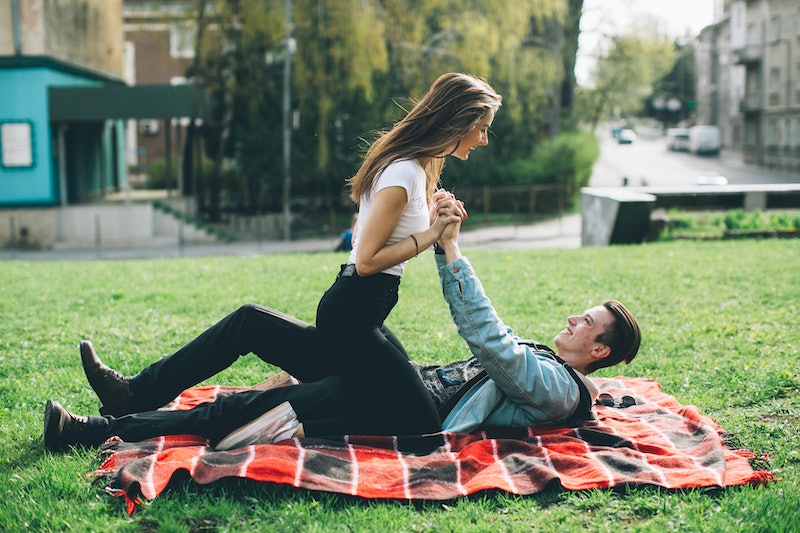 There are few things more painful than being a stand-in to a partner who's looking for "The One" — and doesn't think that she's you. But what are the signs you're a placeholder for your significant other? Placeholder, in this case, of course, means that you're there, sitting on the other side of the dinner table, washing your partner's dishes, meeting them for brunch, and doing the things we do in relationships — for all intents and purposes, you're your partner's "person," and you're in a relationship together — but you're just holding the place of someone "better," and eventually your partner plans to end things when he or she is ready to find their true love, whether they are consciously aware of that fact or not.

Ouch. But it happens to the best of us, and there are some tried and true red flags that can give away the fact that you're dealing with a placeholder situation and should get out ASAP. Here are nine indications that this is what you're dealing with, according to relationship experts. But first, check out the latest episode of Bustle's Sex and Relationships podcast, "I Want It That Way":

1. A Complete Inability To Make Plans

Refusing to talk about future plans is a major warning signal, Danielle Sepulveres, sex educator and author of Losing It: The Semi-Scandalous Story of an Ex-Virgin , tells Bustle. Even worse, some people who treat their partners as placeholders can be wary to discuss anything that isn't directly in front of them, even if future plans are short-term. "Someone who doesn’t take you into consideration for the long-term wants to take each day as it comes rather than focus on a future with you, which is signaled by not following through on plans that are made," she says.

Even if your partner makes excuses — "I really, really love stayin' in the moment, man" — don't trust such false commentary. And if they do manage to make plans, but treat them "like they’re always up in the air and of no consequence if they don’t pan out," the same problem is at hand. "Essentially it shows that you’re not a priority, you’re there when it’s convenient," Sepulveres says. "If you weren’t a placeholder, you would be a priority — plans would matter." Definitely.

Apparently "rebound" is just another word for "placeholder." "If you started dating right after he [or she] got out of a relationship, chances are you’re the rebound and the placeholder," New York–based relationship expert and author April Masini tells Bustle. Though generally people call the just-out-of-an-LTR relationship a rebound, placeholding plays into this phenomenon as well. It's easy for people to feel weird about being alone, "and they take a new girlfriend [or boyfriend] right away so they can ease the pain and get through the transition of a breakup more easily," Masini says.

The issue lies within the way your partner sees you, she says."Rebound relationships can be hot, sexy and whirlwind, but they can also be temporary. Anyone who starts dating you right after a breakup is probably eyeing you as a placeholder," she says. So if you think you're a rebound, think about what you really mean to your partner. That said, some rebound relationships can work out, as long as both parties work on their baggage separately, and are committed to working on themselves.

You're a whenever-is-convenient girlfriend, not a serious girlfriend: "They are not putting energy into the relationship, and you simply date when it's convenient," zen psychotherapist and neuromarketing strategist Michele Paiva tells Bustle. "Relationships should progress, not stay stagnant." If you feel like it's Groundhog Day in your relationship, it probably is. "If you feel like your relationship is like a pond that is stale and murky, then don't have a symbolic Titanic ending with someone emotionally freezing," she says. "Instead, get on the single-and-ready-to-mingle paddleboard and make waves." Well, that's one way to put it. "In zen, we might still have compassion for the person but we also have to have compassion and love for ourselves," she says. And this love, in this case, means moving on. "Stand tall, love yourself and don't you dare let someone put your spirit on a shelf," Paiva says. "You are worth more." Believe it!

"They will not introduce you to people that are important in their life like friends and family, even though you have been together for some time," psychologist Nikki Martinez tells Bustle. In this scenario, your boo's happy to hang when they want, but they're not serious or committed, and they're still envisioning someone else as their "one" someday. Don't let them make excuses. "They will have all different reasons for this, but when it comes down to it, there comes a point in a relationship when these worlds should cross, and you should know the people in each other's lives if the relationship is serious or has a future." If it's been a year and you've never met her mom (who she's close with), ask why not — and see what happens.

"If your partner feels that you are not necessary or important in their life, they will accord you little of their time in their schedule," relationship coach and psychic medium Melinda Carver tells Bustle. "Placeholders are viewed as a necessity for sex, wedding dates, or until something better comes along." Harsh, perhaps, but definitely true. If you always go with your girlfriend or boyfriend to events but never snuggle and hang on a Sunday afternoon, or you can't get them to go to your work events and parties, think twice. And then, of course, there's the bedroom aspect.

"They never make time for you unless they want you to be around — usually for sex," Carver says. "Your partner may not want to introduce you to his [or her] family or friends, or they may downplay your relationship to them — especially in front of you." This feels awful, and is not OK. "If you experience being downplayed in their life for their schedule, family, friends and only called for sex, then you are a placeholder and it is time to decide whether you will move on or stay," she says. Hint: Terrible idea to stick around. "Staying in this kind of relationship will end when your partner does find that 'something better,'" she says. Take matters into your own hands and move on.

"When you don't have serious discussions when you are in places where you should," you're a placeholder, Stefanie Safran, Chicago's "Introductionista" and founder of Stef and the City, tells Bustle. On this list? Everything from holidays to the future. Safran also echoes Carver's sentiments about being at-the-ready for your partner's events, but never getting them to show up in your own life. "If you are going as their 'date,' but a discussion never happens about moving the relationship forward about getting engaged, moving in together, meeting their extended families, it's looking more like you are flavor of the month than a new SO," she says. It's hard to admit, but if this is happening, be real with yourself for your own good.

Walk into the restaurant where you're meeting your partner — what happens? Do they look up and greet you, or do they glance at you and mutter something as they furiously tap their phone? When they don't look up when you walk into a room, you're a placeholder, Dr. Ramani Durvasula, author of Should I Stay or Should I Go: Surviving a Relationship With A Narcissist , tells Bustle. Or if "they rarely ask you about your day, never listen to you, never remember what you tell them," these are all signs too. Though it can be painful, it's important to see these flags and pay attention them — especially when your partner isn't paying any attention to you.

Should I Stay or Should I Go: Surviving a Relationship With a Narcissist , $17, Amazon

8. They Don't Respect You

If your partner isn't treating you with respect, you're a placeholder, Tina B. Tessina, aka Dr. Romance, psychotherapist and author of Love Styles: How to Celebrate Your Differences , tells Bustle. Respect is one of the most vital components of a relationship, right up there with trust and honesty and love. And you are important, and you have to believe that for yourself — and if your partner doesn't, toss 'em.

Love Styles: How to Celebrate Your Differences , $12.85, Amazon

You're a placeholder if, "when you are with your significant other, you feel like a tag-along rather than an essential part of the group," dating expert Noah Van Hochman tells Bustle. You should feel important when you're with your partner. If not, get far, far away. If "conversations take place whether you are near or not, and your partner doesn’t make a concerted effort to include you," you're not valued in your relationship. You want to be a huge part of your partner's life, and you shouldn't settle for anything less. That's what placeholder-dom is all about — settling. The worst. Don't do it!

More like this
The Best Time To Date After A Breakup, According To Experts
By Bustle Editors
What Is The Forest Personality Test? The TikTok Trend, Explained
By Georgina Lawton
Expert Tips For Being On Top When You're Plus-Size
By Lexi Inks
7 Women Share Their Best Orgasm Stories
By Lexi Inks
Get Even More From Bustle — Sign Up For The Newsletter