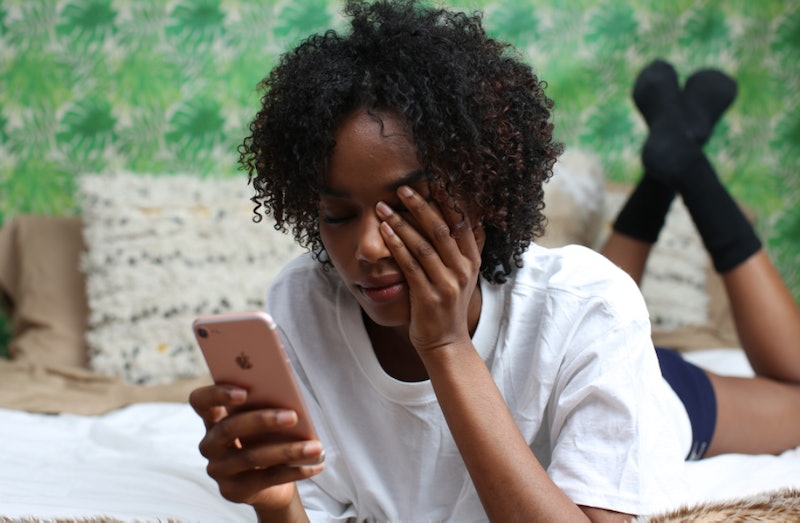 Some people are lucky to have a healthy, loving relationship with their mom. But if that's never been the case for you, you might be wondering what happened, what went wrong, or why you just can't get along. While there are countless causes of unhealthy mother-daughter relationships, one possible explanation could be that your mom has borderline personality disorder (BDP).

BPD makes it difficult to have stable relationships — and that can play out in toxic ways between moms and their kids. "It's really, really hard to have a mom with BPD," licensed clinical psychologist Natalie Feinblatt, PsyD, tells Bustle. "Primary caregivers of infants are ideally stable and predictable, which is pretty much the opposite of someone with BPD. If your mom never enters treatment specific to BPD it will be difficult, or maybe even impossible, to have a consistently positive relationship with her."

That's because this personality disorder is marked by a rigid pattern of unhealthy and abnormal thinking and behaving, and is focused on chronic instability in mood, behavior, relationships, and self-image, Feinblatt tells me. That can, for obvious reasons, truly take a toll on how your mom feels, and how she treats you as a result.

Below, some subtle signs she might have BPD, as well as what you can do to help yourself and your mom.

1. She Constantly Thinks You're Going To "Abandon" Her

Fear of abandonment is a huge issue for people with BPD, and it can leave them scrambling for attention and reassurance. If this is your mom, she might call you a million times a day, assume you're never going to visit, or decide one day that you hate her — despite evidence to the contrary. As Feinblatt says, "Your mom cannot handle feeling like she has been abandoned by anyone."

2. She Loves You, Then She Hates You

It might be tough to tell where you stand with your mom. "She either loves or hates you with a passion," Feinblatt says. "And when she feels one way about you, she will fail to remember or even deny that she ever felt any other way." This constant back and forth can be confusing and stressful for the entire family.

3. She Has Intense Angry Outbursts

It's normal for parents to get mad or slightly stressed throughout the day. But your mom's BPD-related anger has always been on a whole different level. "When she gets angry she gets loud, physical, and possibly even a bit paranoid," Feinblatt says. "Her anger scares you and you never know what will set it off."

4. She Won't Back Down During A Fight

Since it's easy for people with BPD to feel slighted and attacked, it's not uncommon for them to fight dirty during arguments. If this perfectly describes your mom, you might also notice that she doesn't seem to realize when it's time to apologize.

"She doesn't back down from a fight, and doesn't look for a diplomatic and polite way of solving a problem," says licensed social worker Debra A. Burrell, CSW. And that can truly strain your relationship.

5. You Have To Walk On Eggshells Around Her

While everyone's entitled to a bad mood, does it seem like your mom is always overly-sensitive? Do you have to walk on eggshells around her? "For people with BPD, what might not impact someone else can be a major trigger for them and be incredibly distressing," says licensed clinical psychologist Dr. Mimi Shagaga, in an email to Bustle. "For example, a change in routine or a simple word can sometimes set them off." If you feel like you can't say or do anything right around your mom, this may be why.

6. You're Often The "Mom" In The Situation

Moms with BPD often have a hard time being that rock their kids look to for love and support. "Sometimes, there will be a role reversal situation, where the daughter is sought by the mother for strength and comfort, rather than the other way around," says health and wellness expert Caleb Backe. "Coupled with the BPD tendency to suffer from abandonment issues, it can get very tense and very unstable — fast."

7. She's Always Complaining About Her Friends

Again, BPD can make it difficult to have healthy, stable relationships, so take note if your mom always seems to be embroiled in a conflict with friends, coworkers, or your family members. As Burrell says, "Your mother is always angry at someone; feels slighted, not included, or somehow not important to her friends or her siblings."

8. She Cuts You Out Of Her Life

People with BPD are known for their intense overreactions, as well as their mood swings. "She may want to be around you all the time, then suddenly turn on you and want nothing to do with you," says NYC-based therapist Kimberly Hershenson, LMSW. "Something mundane, such as you being late, may set her off leading her to cut you out of her life for a period of time."

BPD can also lead to impulsiveness, "such as spending sprees, unsafe sex, substance abuse, reckless driving, and binge eating," Hershenson says. While it's OK to occasionally indulge in an online shopping spree, or a snacking marathon, if the above is a major part of your mom's life, it could be due to BPD.

10. She Says She's Disappointed With You

Parents can be tough on their kids, but your mom seems to take it to the extreme. "She can become so disappointed in you, that you feel awful, without really knowing what you can do to improve the situation," Burrell says. This is, in part, due to her unhealthy expectations and distorted way of looking at the world.

11. She's Always Been This Way

Remember, a personality disorder is an ongoing, life-altering problem, so there's no need to worry if your mom has been moody off and on, or if you only occasionally argue. "BPD, like all personalty disorders, is a lifelong set of symptoms," says Feinblatt. "If your mom has been having the above issues for weeks or months, it's not BPD."

But if she's been this way her whole life, take note. It could explain many of the problems in your family, such as fights and disagreements — as well as certain issues you've struggled with growing up. If you suspect BPD might be to blame, therapy is often the next step. It may be necessary for you and your mom to go, so you can repair any damage that's been done, and learn how to cope in a healthier way.