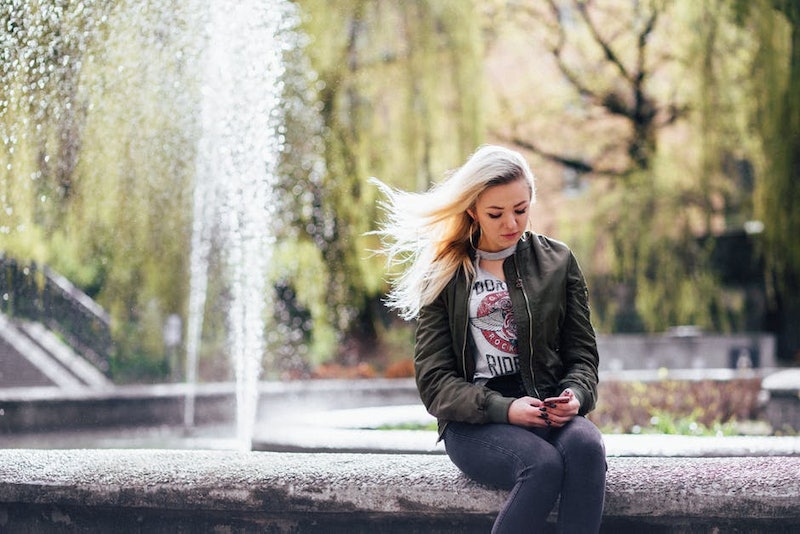 Like it or not, there are some personality traits that truly can rub people the wrong way. While it's not your job to make everyone like you, recognizing these off-putting habits can come in handy, especially if you've been having difficulty making friends, or if you've been feeling a bit left out or misunderstood.

Some of the worst offenders? As author and life coach Jaya Jaya Myra tells me, habits such as interrupting, playing the devil's advocate, and finishing people's sentences really take the cake. These habits can make you seem difficult to get along with, kind of rude, and not very likable.

The problem is, most of us do these things without even realizing it, which is why it can help to keep in mind the signs you're rubbing someone the wrong way. If people are avoiding you, backing away when you talk, or never picking up their phone, this may be why.

"Our words, our tone, our cadence, our body language, our eye movements, our hand gestures, our posture, and the timing of our statements all communicate information to other people," says Josh Klapow, a clinical psychologist and host of The Web Radio Show. "From making new friends, to leading organizations, to developing a love relationship, noticing how the world is responding to you is probably the most critical feedback you can take in."

That said, you shouldn't feel bad about your inherent traits and unique quirks — they're what make you you, and it's OK to be your natural self. But, it never hurts to become a bit more self-aware, especially when trying to win people over or when making new friends. Read on for some signs it may be time to check in with yourself, and change whatever traits may be pushing people away.

1. Your Friends Aren't Calling You Back As Often

If you're rubbing people the wrong way, for whatever reason, you might notice a significant drop-off in your calls, texts, and invites. Sure, people might just be busy. But, as psychic and spiritual counselor Davida Rappaport tells me, it could be a sign your friends and fam just won't want to deal with your off-putting personality.

2. You've Been Referred To You As "Negative" More Than Once

If you've heard, more than once, that you're the "negative" one in the group, take note. "If you complain about your life and are the one always venting to your friends, you should think about the negative energy you're giving off," NYC-based therapist Kimberly Hershenson, LMSW, tells Bustle. "People may stop wanting to be around you."

If you're difficult to get along with, you might notice a trend where people leave you hanging. "[They] don’t follow-up with appointments or phone calls when you know they have the time," says Klapow. "They may get back to you, but it’s only after you have prompted two or three times."

4. Nobody's Asked For Your Help In A While

If you're repeatedly skipped over at work, or your phone never rings when a friend's in trouble, it may be time to reevaluate how you've handled these situations in the past. "On the one hand, it may be that they are looking out for you precious time, which is possible. But on the other, it may be that your past behaviors have indicated that you are not trustworthy and that they really can’t count on you to get the job done," Klapow says.

5. It Seems Like People Agree With You... On Everything

While it's always nice when people agree with you, it's not so great if they seem to be doing it, just to hurry the convo along. "You may think you are a persuasive communicator, but it may also be that they simply want to avoid any conflict," Klapow says. "If you are asking questions or making suggestions that seem preposterous — and you are still getting a 'yes' — you may want to rethink your delivery."

If it seems like no one wants to truly talk with you, beyond casual conversation, take note. "If someone won’t go deep with you in conversation, they are often telling you they don’t trust you with their feelings and vulnerability," Klapow says. Have you been judgmental in the past? Or have you shared a few too many secrets? If so, it may be time to make a change.

7. No One Ever Argues With You

Again, watch out for signs that people are being a little too nice to you. "Have earned their respect? Possibly. Or they are scared of you?" Klapow asks. "If you are never challenged, or are referred to in a manner that is uber formal, likely you are a great source of stress and fear for them." So, what can you do to make people feel comfier in your presence? "Dial it back, be more laid-back, and let them know that you are human and you have a softer side."

If something about you is difficult to get along with — you're argumentative, pushy, etc. — it'll likely show up in peoples' body language. For instance, they may back up, cross their arms, or try to cut your convos short. "If you run into a friend of yours on the street, at an event, or in a store and you notice they ignore you, turn away, and/or move in another direction, it is a sure sign," Rappaport says.

9. You're Only Trusted In Certain Settings

If you're known, in your friend group, as the wildcard who will say anything, that can be a great thing. But if you're only ever invited out in certain settings, it could be that very same likable trait is rubbing others the wrong way. When that's the case, Rappaport tells me you might only get invites when the get-together is in certain settings, like a loud bar where no one will be able to hear you. So take that as a sign.

10. People Get Defensive Around You

As you know, it's not uncommon for people to get defensive when they're being rubbed the wrong way. So, if you can't seem to have a convo without people reacting in an emotional way, Myra tells me it may be a sign something about your interactions needs to change.

If you're consistently misunderstood, it can help to take a look at what you're saying (and how you're saying it). As Myra tells me, it could just be a misunderstanding or failure of communication. But it could also be the perfect moment to step back and see what, exactly, you might be doing to rub people the wrong way.

While you certainly don't have to over-analyze every situation, it can help to keep an eye out for the signs you might be throwing people off. If that seems to be the case, a little self-awareness really can help turn things around.