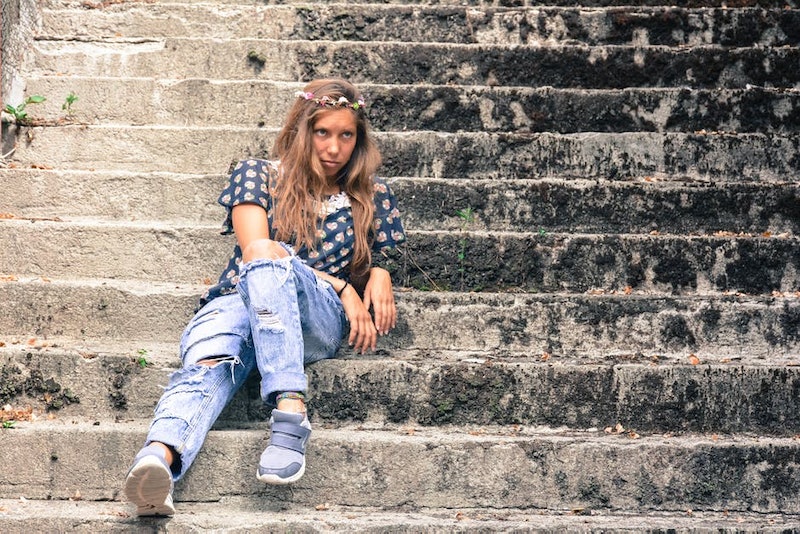 Not everyone has a bubbly, sweet personality. And that's totally OK. But some of us have a few habits that make us seem meaner than we actually are. If this describes you, I bet you spend at least part of your day feeling misunderstood. Or wondering why you can't make new friends.

Whatever your specific issue might be, there's no denying the vibes we project to the world — unintentionally or otherwise — play a substantial role in how others see us. So, even if you're the kindest person on earth, or are simply acting "mean" because you're feeling nervous, your habits could be sending off a completely different message.

The good news is that, once you realize what what's going on, it's pretty easy to change. "Catching mean thoughts and actions before they happen gives you a chance to make a new choice and increases your own self-awareness," life coach Melanie Childers tells Bustle. "Before you say something snarky or judgmental, take a breath." And begin to pay attention to how you hold yourself, how you enter a room, and what you're actually saying to the people in your life.

While you shouldn't change your personality, or feel like you have to monitor your actions 24/7, you can make an effort to adjust bad habits and remain cognizant of how you're being perceived. Read on for some great places to start, since the habits below can make anyone seem meaner than they actually are.

It's normal to stand this way when you're feeling cold or anxious. But do know that crossed arms can appear standoffish. S o keep that in mind when trying to amend the type of energy you're giving off. As licensed therapist Yolanda Rambert-Marshall, LAC, says, "[You] have to remember before a person speaks to you the first thing they see is your body language, and you want to make sure it's saying the right things."

2. Glancing Down At Your Phone

So many of us reach for our phones when we're feeling bored or nervous in social situations. But, again, it's not a habit that's all that welcoming. As Rambert-Marshall tells me, looking at your phone can make it seem like you aren't interested in the people around you, or like you'd rather be anywhere else. To be safe, keep your phone in your pocket so you aren't tempted to look and accidentally push people away.

3. Being A Little Too Honest

Some of us are honest and kind, and some of us are honest and blunt. If you fall into that latter group, you may be throwing off some mean vibes. "Often we think just 'telling the truth' or 'calling it like it is' makes us honest, but it can just as easily make us look mean," says Childers. "Ask yourself first, 'Is what I'm about to offer necessary and important? Is it kind and helpful?' If not, find a way to reword it. Constructive criticism is more useful to the world than 'calling it like it is'."

Most judgmental remarks come from a place of low self-esteem. But that doesn't mean everyone recognizes that, or that they'll give you the benefit of the doubt. So practice leaving others alone and focusing on your own confidence, Childers tells me, lest you appear crueler than you'd like to be. Once you build yourself up, you'll feel less inclined to knock everyone else down.

In the same vein, you might say something dark and cynical to get some laughs. And that's great, if you're in the right crowd. But do keep in mind how snarky comments can change the mood in the room. "While the intention of snark is to be funny, it usually clues others in to a deeper, meaner personality," Childers says. "It leads people to trust you less, because if you would say something snarky about someone else, why wouldn't you turn that snark on [them]?"

6. Not Responding To Messages In A Timely Fashion

"People are addicted to technology and if you're trying to take a break from being on you're phone, that's fine," says NYC-based therapist Kimberly Hershenson, LMSW. "Just make sure you are getting back to people within a reasonable amount of time." Or, let them know if you'll be away for awhile. That way the people in your life won't feel hurt or ignored.

7. Being "Short" In Your Emails

Hey, you're busy. So it makes sense why you'd occasionally send a short email. Do know, however, that brevity can come across as slightly rude. "In the world of written communication, being unnecessarily terse in your emails can leave people thinking you are barking orders, yelling or simply being rude," ICF certified executive coach Tim Toterhi tells Bustle. "We’re all crunched for time, but adding a simple 'Hi' at the start of your emails can dramatically changed the tone."

Again, this one can be chalked up to nerves. And that's OK. But do make an effort to work on your eye contact (and your nerves) all in the name of appearing less "mean." As Toterhi tells me, eye contact is where it's at if you want people feel listened to and cared for. So it's definitely a habit worth working on.

9. Being Negative All The Time

Moaning on in a negative way about everything — the weather, the day of the week, your headache, your work load — can really drag people down. So, again, it's probably a habit worth changing. "Acknowledge your tendency to look at a glass half empty then commit to trying to do a better job at ... taking a pulse check on the energy of the crowd and decide whether to hold your tongue or not," says certified life coach Jane Scudder.

10. Swooping In To "Help" Without Being Asked

"Often when people are struggling, they don't actual want your advice," life coach Chris Delaney tells Bustle. "Rather, they want to be listened to rather than told what to do." While it's certainly kind of you to offer help or to step in with advice, it can come off a bit condescending.

How often do you walk down the street, or across your office, and totally ignore everyone you pass? While you don't have to smile and waste your energy on everyone, blowing past people can come off as mean, certified life coach Natalie Currie tells me. If this describes you, make an effort to look up, smile, and occasionally nod at those around you.

It may not seem like a big deal, but it's a truly likable gesture.