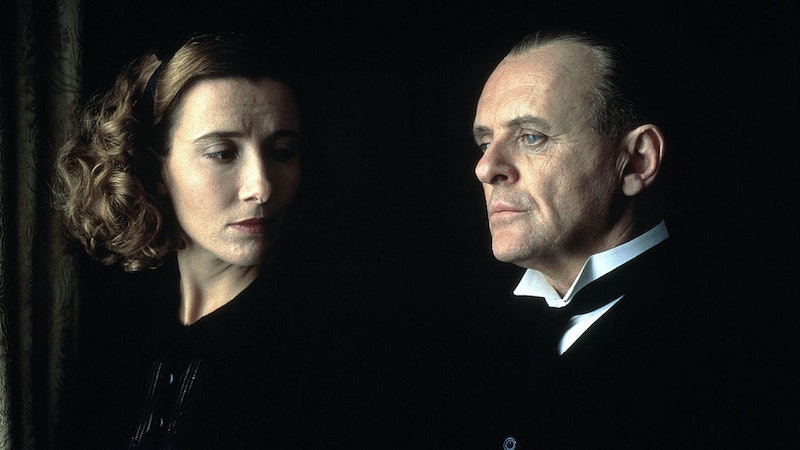 Kazuo Ishiguro has won the 2017 Nobel Prize in Literature, and anyone who has read his amazing work is, well, stoked. Ishiguro has met incredible acclaim for his seven novels, which include Never Let Me Go and The Buried Giant. But perhaps Ishiguro's most beloved book (well, depending on who you ask) is the masterpiece The Remains of the Day, which won the prestigious Man Booker Prize in 1989 and was adapted into a film starring Anthony Hopkins and Emma Thompson in 1993. If you haven't read it – or just need a refresher — here are 11 of the best quotes from The Remains of the Day to remind you why this novel has become a beloved modern classic.

The Remains of the Day is set in England in the summer of 1956, and follows a butler named Stevens, who has spent his life working in a high-class English household. Stevens sets out on a "motoring trip" through the West County to visit Miss Kenton, a housekeeper who left 20 years ago to get married to another man. As the book progresses, Stevens is thrown into the depths of his own mind, slowly uncovering (and sometimes looking past) the truths about his own identity, his history, and the restraint that has ruled his life so completely. Readers are able to observe his emotions peel away layer by layer, and you feel every ounce of his crisis as he tries to understand the walls he has built around himself.

Ishiguro's prose is deft and graceful, each word falling precisely into place. Even just reading a snippet of his writing is likely to make your eyes open a little wider and your heart thump a little harder. He has an innate ability to pin down the stark, subtle truths of the human spirit and weave. Without a doubt, his words will make you cry.

So, take a moment to celebrate Ishiguro's well-deserved Nobel Prize win with these beautiful quotes from The Remains of The Day: