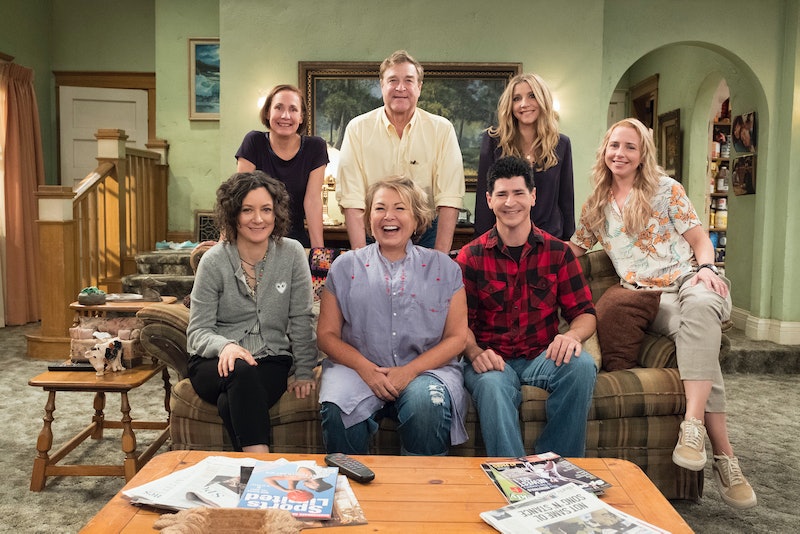 Though rumblings of ABC's forthcoming Roseanne reboot have been circulating for months, fans of the long-cherished 90s family sitcom have been kept mostly in the dark as to the specifics of the new series. Until now, that is. Ahead of the sitcom's upcoming March 27 premiere date, ABC released a handful of teaser photos from the Roseanne reboot's first episode. And, while the photos mostly suggest that not a whole lot has changed in the Conner household since its residents (temporarily) bid us goodbye in 1997, it looks like the new series will also tout its fair share of surprises.

Much to the relief of woeful Roseanne enthusiasts who spent the better part of the late 90s mourning the loss of the beloved Conner family patriarch, these first-look photos confirm what many people already expected: Dan Conner is not actually dead.

Confused? For those who weren't around for the OG Roseanne sitcom's nine-season run (and, honestly, for those who were around but are nonetheless feeling some residual bewilderment), here's a bit more context on the convoluted back-and-forth plot lines that have led us here.

When the original Roseanne went off the air in 1997, the sitcom's series finale threw a handful of major, wholly unexpected curveballs at its viewers, many of whom had been following the Conner family antics for almost a decade. And that curveball was essentially this: the show's storylines and premises were not necessarily actual happenings (within the Roseanne universe, that is; obviously, they were always fictional happenings in the sense that they'd been written into a sitcom), but rather semi non-fictional renderings of Roseanne Conner's life, as told through the title character's memoir. Viewers weren't privy to this monumental caveat until the show's final episode, when it was revealed that Roseanne Conner had, in fact, altered several plot points for the sake of the book. Arguably the most surprising alteration pertained to Dan, who, the finale revealed, had actually been dead since the character's Season 8 heart attack, though Roseanne Conner's memoir had reflected otherwise.

The details of exactly how Roseanne 2.0 plans to resurrect Dan from the hereafter — or simply pretend the "death" never happened in the first place (hey, apparently the characters have done it before) — isn't quite clear, though the show promises to address it somehow during the upcoming series reboot.

Two decades, one fictional death, and a few next-generation Conner family additions later, the wacky, fan-favored sitcom couple is still standing. Not only is Dan alive and well, but — judging by the handful of sweet teaser photos —the kooky duo also remains just as married (and as wacky) as ever.

3. They're Still Drinking In The Garage

To nobody's surprise (probably), it looks like the Conners are hanging onto a few time-old family traditions, one of which is — of course — cracking open a beer (or two, or three) in the family garage.

The reboot is set to revive the shenanigans that inevitably take place at the iconic Conner family dinner table. Also making a comeback: the original theme song.

Shameless star Emma Kenney is one of the reboot's newbies; she plays Darlene's daughter, Harris Conner-Healy. She must have inherited the "frustrated teen" look from her mother.

6. Laurie Metcalf Will Reprise Her Role As Jackie Harris

Laurie Metcalf will return to the Roseanne cast as the beloved, equally wacky sister of Roseanne Conner, Jackie Harris.

8. The Conners Are Still Cracking Themselves Up

Because, well, that's what they're best at. (Note the smattering of pill containers situated on the kitchen tabletop.)

9. The Ol' Plaid Couch Is Intact

As it has provided the comfy backdrop for many a Conner family heart-to-heart, it's not totally surprising that the faded, olive-green plaid couch will be making a comeback along with the rest of the Roseanne cast. It's unclear whether this couch is actually the same set piece from the original sitcom, or just an expertly manufactured look-a-like. But, as far as appearance is concerned, it bears a pretty uncanny resemblance to the original.

10. The Conners Still Love Hanging Out Together

Only now, they've got several pint-sized new members to join in the family-wide living room hangouts.

The Roseanne reboot's first-look photos mostly serve as tacit confirmation that, at least in the Conner household, old habits certainly die hard. And, in classic Conner fashion, it looks like they're still keeping it all in the family.