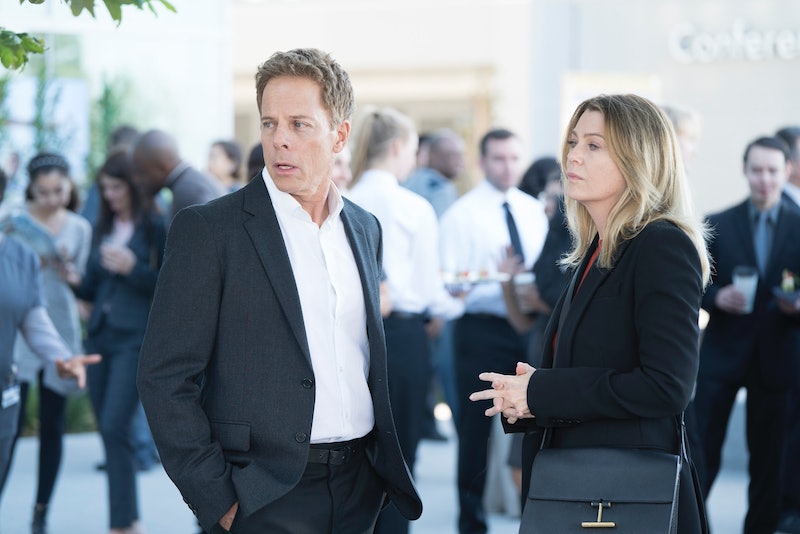 Greg Germann has only appeared in 17 out of the whopping 334 episodes of Grey's Anatomy, and yet he's quickly become a fan-favorite presence on the show. Always ready with a quippy one-liner, Tom Koracick's quotes on Grey's Anatomy are always a highlight of any episode he's in. The rakish surgeon can always be relied upon to bring plenty of humor to Grey Sloan Memorial Hospital, but there's also a surprising amount of heart behind his witty repartee.

Of course, fans will remember that Dr. Koracick first made an appearance early in Season 14, when he was brought in to operate on the brain tumor belonging to his old friend (with benefits) Amelia Shepherd. Viewers quickly took a liking to the new doc, so he was brought back later in the season for another arc involving young Kimmie Park and her "inoperable tumor," during which he also bonded with April Kepner over their struggles with faith.

Of course, by the time Season 15 rolled around, fans were so bonded to the character that there was no question about bringing him back. Not only did he play a crucial role in saving Catherine Fox's life, he's now romantically involved with Teddy Altman, suggesting that he'll be sticking around the halls of Grey Sloan for the foreseeable future.

Here are some of Dr. Koracick's best quotes that prove he's the sneaky MVP of Grey's Anatomy.

1. "I'm not gonna follow your plan because the part of your brain that makes plans is compromised."

Even though he can frequently come off as sarcastic, when it comes down to it, Koracick isn't afraid to lay down the law and take charge.

2. "When Shepherd said 'on the team,' I figured that meant you were a player. But hey, mascots are important. Those t-shirt guns don't fire themselves."

Koracick can be pretty dismissive of anybody who isn't a neurosurgeon, as he was of Alex when he found out that Dr. Karev was "just" a peds doctor.

3. "I know you think you're right, but you're used to Brain Tumor Shepherd, so you don't hear it when nonsense comes out of your mouth."

Sometimes even fellow neurosurgeons need to be reminded of what's what, and Koracick is always happy to oblige.

This is the thesis statement of Koracick's very personal and revealing monologue to April Kepner, which deserves to be recapped in full:

"My kid died. Freak accident at school. Took a baseball bat to the skull, died instantly. He was 10. It was unfair. So unfair. The priest said, 'Talk to God,' but I wanted to find God and choke the life out of Him. I didn't want to talk to God. I didn't care what He had to say. I wanted to talk to my son. I was not as delightful then in that period as I am now. I was not fit company. My marriage fell apart. I was alone. So I went to church. Because in church, you can talk out loud all by yourself and not look crazy. So I would go to Mass, and I would talk to my son. I still do."

5. "This is the frontier! I could scoop out brain tumors like I'm balling melons, which is my second favorite kind of balling."

Not even the doctors of Grey Sloan Memorial Hospital are above a good "balls" joke. Funny is funny!

6. "You think they can sense our sexual tension?"

Koracick is a very generous scene partner. He doesn't always hog the one-liners, sometimes he'll happily set his coworker up for one! Like this quote from Tom, which earned a hilarious response from Meredith: "Wouldn't I sense it?"

7. "It's not anti-feminist to fight for what you want. It's anti-Amelia not to."

A good friend encourages you to go after what you want, which is exactly what Tom does when he pushes Amelia to fight Teddy for Owen. When Amelia balks at the idea of fighting with another woman over a man, he shares how he wishes he'd fought for his wife before she left him.

8. "She woke me up. I had a kid, a son, and then I didn't. I sleep-walked through years of my life, and Catherine reminded me that I was alive. And she sings a mean harmony, too. She's my friend."

Another thing a good friend does is acknowledge their friends' strengths: like the time they saved your life, or their ability to carry a tune.

9. "We are the A-Team, and we don't lose. Just ask Shepherd's tumor. Oh, wait, you can't. Because I removed it. Flawlessly."

10. "What if we try your thing? You know, the word-vomit and the feelings? That seems to work for you."

Proving how much he's evolved over the course of his time on Grey's, Koracick tried the whole emotional monologue thing before operating on Catherine. Of course, that resulted in Amelia worrying about cow-tipping injuries and Tom fretting over the men whose penises would never be fixed by Catherine if she died. Maybe he's better off sticking with the one-liners.

The quippy surgeon is capable of getting romantic when he wants to. After taking Teddy to get a pedicure, she scoffs at one of his typical jokes: "You are just so…" His response to her unfinished thought is perfect and made fans instantly root for this new couple.

Can the writers officially make Dr. Koracick a series regular please? We need his humor and his heart on this show for many years to come.