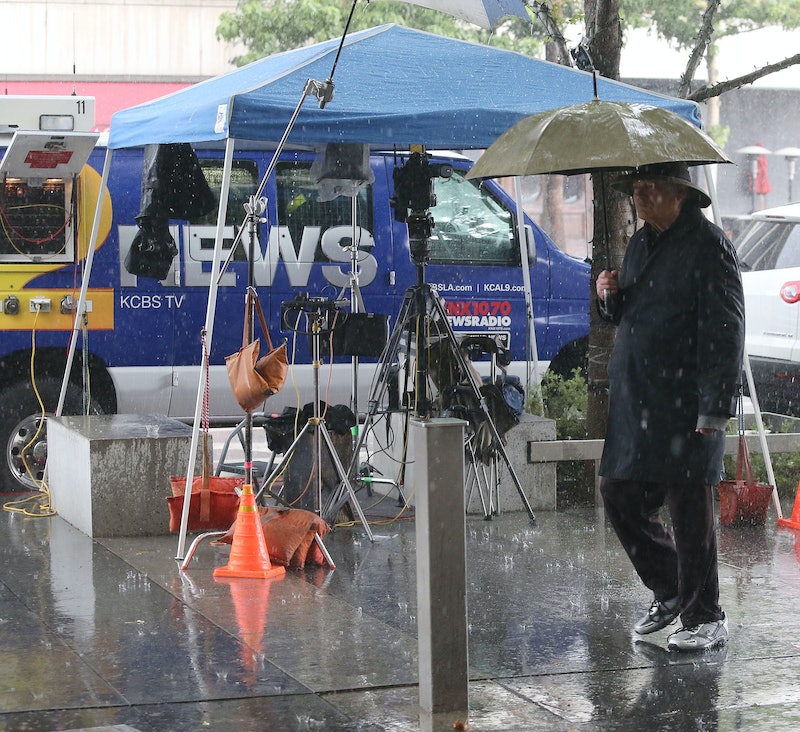 Following the non-stop coverage of Hurricane Irma that blanketed the airwaves last week, there's been much discussion about the ethics of exposing reporters to hazardous conditions to chase storm stories. Millions watched as reporters were placed directly in the path of the extreme conditions that Irma brought, including 150 mph winds, driving rain and 10 foot storm surges. It's hard not to think that in its quest to fill 24 hours a day with engaging content, television news coverage of Hurricane Irma was irresponsible, and placed its ratings over the lives of its reporters.

Putting reporters in the field during significant weather events is nothing new, and its origins actually date back to 1961, when Dan Rather took to the streets during Hurricane Carla to show viewer what was happening in the storm's path. Those in favor of reporters being thrust into severe hurricane conditions say that they are providing a public service, showing people how dangerous it is to be outside while keeping them abreast of the progress of the storm.

Others say the risk reporters take on is too much, and not worth it. They point to the fact that these reporters are being asked to put themselves in situations that authorities are specifically warning the public against. They are out in the elements, facing hazards such as falling trees, flying debris, downed power lines, and contaminated flood waters, situations that could cause them physical injury.

So where is the line? What wind speed is finally too much to watch a reporter get battered in? How high must the flood waters be before they are told they can sign off? No matter where you stand on the storm reporter spectrum, here are some videos from Hurricane Irma coverage that show the dangers these reporters face to get the story.

The second this meteorologist exits the car, he can barely stand up to the gusts of wind and driving rain that are pummeling him. He is even sporting a paintball mask to protect his face from the elements.

I don't think this is what the Zac Brown Band mean when the sang about being knee deep in the water. People are constantly warned not to enter floodwaters during a hurricane, because the water is often contaminated with biohazards, fallen power lines can cause electrocution, and other obstacles in the water can drag you under the surface. To put reporters in that situation as an illustration of how high the water is seems irresponsible.

3. Key Largo, Montego, Baby Why Don't We Go...Not Into A Hurricane

The Florida Keys were under mandatory evacuation for days, and residents who stayed were told that if they called 911, no one would answer and they'd be on their own for days until it was safe to get rescue crews in. But somehow it was still deemed a good idea to send reporters into the area that was sure to suffer a direct hit from the Irma.

Many Twitter accounts for cable news channels and network TV shows promoted the storm coverage like it was the newest season of Dancing With The Stars.

5. This Is No Time For Fitness Jokes

This Twitter account joked that "leg day is important," commenting on the reporter fighting to stand up against gale force winds. But the fact of the matter is no amount of squats could prepare any human to withstand these winds.

In perhaps the most relatable storm coverage moment, this CNN reporter yells "I'm out," and rushes off screen when the winds kick up.

This reporter compared the conditions he was facing to "the backwash of a jet engine," and saying that the sand from the beach was blowing with the wind, and stinging his face. He later points to a metal street sign waving fiercely in the wind, warning viewers that it's indicative of the dangerous conditions, all while standing feet from it.

This reporter told his audience to "be safe"... while he himself faced gusts of more than 100 mph.

This reporter struggles to get his jacket back on, fighting against the blowing winds, and describes the storm as "like having a power washer in your face."

10. It's Not Just American TV Reporters

Antigua was one of the first islands in the Caribbean that Irma made landfall in, when it was at its strongest and still a Category 5 storm. The conditions that this reporter faced were presumably far worse than any of the Americans reporters in Florida.

The prevalence of these storm reporters results in many people wanting to copy their efforts, and make their own videos facing the storm, whether as a joke or not. The problem here is that while these conditions are dangerous for anyone, at least seasoned television reporters have experience, resources, and support staff to help them through their broadcasts. Regular citizens don't.

Cable news networks have now set an expectation for the kind of coverage viewers expect to see — and not only just occasionally, but for them to be inundated with it at all hours of the day. It will be hard for TV networks to walk back the spectacle they have built around storm reporting, even as their own anchors express concern about the challenges and safety of field reporters.

And this accepted norm around storm reporting puts smaller stations at risk. Local news teams may feel the need to keep up with the big guys, but don't have access to the same resources. There were reports of "one-man band" reporters, or those who go into the field on their own, serving as reporter, cameraman, editor and producer, being sent out solo into the triple-digit wind speeds to file stories. This is decidedly unsafe and irresponsible for any employer to support.

These storm reporters are certainly brave for the work they do and they conditions they endure. But at the end of the day, TV networks are going to have to decide at what point the danger to their lives outweighs the benefit to the public.