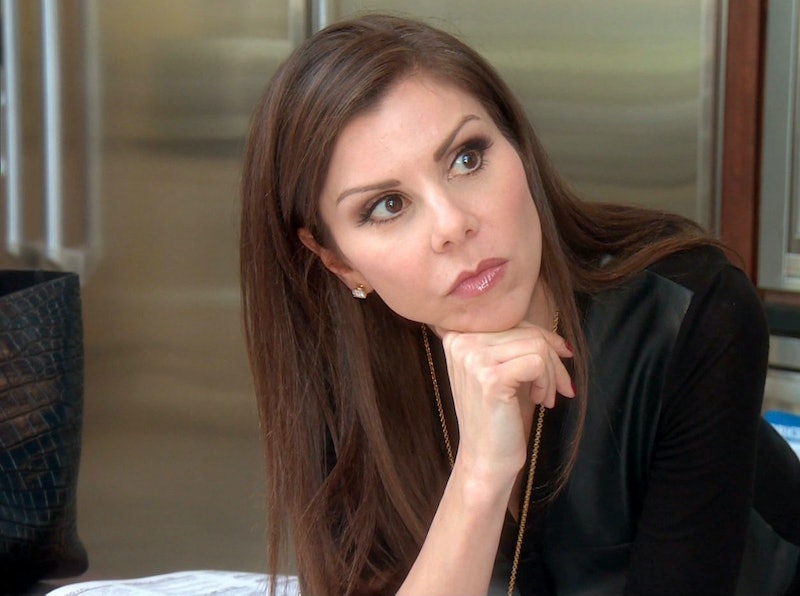 Now that Miss Fancy Pants is exiting the Real Housewives of Orange County, it's time to start thinking about all the ways RHOC will change with Heather Dubrow gone. Ever since she first came on in Season 7, Heather altered the original Bravo Housewives series for the better. Not only did she class up the joint, but she brought a bit of normalcy to a franchise that is certainly far from normal. Yes, Heather lives a life of luxury and sometimes goes way over the top, but more often than not the Housewife felt like a relatable close girlfriend who, like most fans, couldn't wrap her head around what her fellow co-stars were saying and doing.

When Orange County returns for Season 12 (a renewal hasn't been announced just yet, but I have no doubt it will be back with new episodes), it will have a different vibe without Heather, her elegance, her "fancy pants" moments, her common sense, and a slew of her other noteworthy qualities.

With that, let's talk about exactly how Heather's departure is going to change the series greatly. The series won't be the same and if you, like myself, consider yourself a huge Heather fan, then you know you're in for a completely different RHOC if or when it returns.

Most obviously, all of the fanciness Heather brought to Orange County will be no more. That's not to say the other women aren't fancy, but they are nowhere near the level of fancy Heather is. I mean, her nickname is Heather "Fancy Pants" Dubrow.

Most every Housewife who has ever appeared on RHOC has thrown parties, but there was just something elaborate and magnificent about Heather's. Don't forget that she threw a hoedown celebrating the literal breaking of ground at her new home.

Heather always seemed to be the voice of reason when it came to certain situations. She had a way of bringing rationality to whatever drama or argument the women found themselves in during that particular episode.

Between the bickering and screaming (I'm looking at you Vicki Gunvalson and Tamra Judge), Heather's calmness will surely be missed. If only every Houswife could keep their cool like Heather.

Heather and Tamra were the best of friends and had some crazy moments together. Just because Heather is leaving doesn't mean they still aren't BFFs, but it's going to be weird not seeing these two besties. So just who will be Tamra's new partner in crime?

Heather never failed in finding new expensive projects to work on during her time as a Housewife, like her brand new mansion. Anyone else bummed that she left just as she was moving into her home and before fans got an official tour?

Yes, most of the RHOC ladies love their alcoholic beverages, but no one will ever love champagne (aka "champs") as much as Heather.

She never missed an opportunity to put someone in their place or to scold them like a mother. Between her eye rolls and saying, "Stop it," Heather will be missed.

Let's be honest, Heather had the most common sense amongst the other women. No offense to any of them, and as I mentioned earlier, Heather brought more rhyme and reason than anyone else to the super dramatic show.

I prefer to describe Heather's fights as "fancy." She always managed to have an argument in a classy way without ever rarely raising her voice or getting in someone's face. No one will ever be able to do that like Heather.

You never know what to expect when it comes to any of the Housewives series, but while watching RHOC, you knew there would be some type of control thanks to Heather. Things can get messy quickly between the Housewives, and now without Heather they will probably get messier.

Here's hoping RHOC is just as enjoyable without Heather and her greatness.