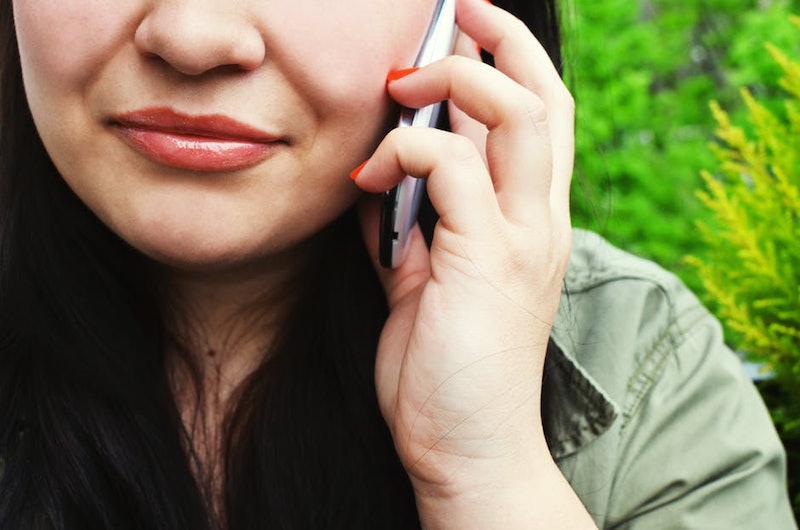 When you find yourself embroiled in a fight, or part of a heated debate, it can be tempting to try to win the argument. It's only human to want to be "right," which is likely why we get into fights in the first place. But the single best thing to keep in mind when arguing isn't winning, but listening, understanding, and then diffusing the fight.

I know, that doesn't sound anywhere near as fun. You might be wondering what the point of a heated debate would be, or why you'd even want to have a passionate (or even angry) discussion if someone isn't crowned victorious. But if you're truly fighting, or something's at risk — like your relationship or your job — the last thing you want to do is risk it all for the sake of winning.

That's why we should all know how to "win" a fight by diffusing it, instead. "You don't want to sabotage a relationship or situation because of an argument," NYC-based therapist Kimberly Hershenson, LMSW tells Bustle. "You likely will need to see this person again and you don't want to ruin your reputation. Unhealthy arguments can also lead to feelings of stress, anger, depression or anxiety if you feel like the situation is ongoing and nothing is getting resolved." Since that's not what you want, read on for some ways to win an argument, without having to stress yourself out or take someone down.

In the heat of the moment, it can be difficult to listen — much less say something nice. But if you'd like to diffuse the situation, you need to validate the other person's feelings. "When someone feels a certain way, most of the time they just want to be heard," life coach Sara Pierce tells Bustle. "Saying things like 'I understand why you'd feel that way...' or 'Anyone would feel like that in the same situation' validates the other person's emotions and completely disarms them." And just like that, the argument will be over.

2. Look At It As A Conversation

Instead of going into an argument with your proverbial fists up, or thinking "this is an argument," remind yourself it's just a conversation. "Go back to the concept of talking with someone rather than talking to someone," says certified life coach Jane Scudder. "It's a subtle but big difference." And it can help keep the other person cool, which pretty much always means you've won the argument.

3. Make It All About Them

People will stop listening if they can't relate to what you're saying, so remember to make the conversation about them. "Showing how and why something matters in relation to that person's life and experience is a really important part of persuasion, but one we neglect to do because we naturally approach the world from our own points of view," says Scudder. "The key for successful persuasion is to break from this." Even if it's hard to do.

This can be super tricky when you're upset, but whatever you do, try not to lose your cool. "Losing your temper will only anger the other person, which will heighten the argument," says Hershenson. If you can keep things calm, she tells me you might even be able to stop the argument. And I think that's totally worth it.

5. Look At Things From Their Perspective

To keep the argument under control, try your best to view the other person's side of the story. "You need to be able to step into the mind of the person you are arguing with and see their view," says Hershenson. "This allows you to figure out what is influencing them and you can come back with a powerful counter argument." Not an attack, mind you. But rather something that'll really put a stop to the fight.

Before getting too deep into an argument, make sure to have your facts straight. As Hershenson tells me, quoting incorrect information weakens your point, which is essentially an automatic loss. So check your facts and avoid yelling about any old thing. If you aren't sure about something, you can always say, "I'd need to look into that."

It's common to toss around exaggerations when trying to win an argument, but this tactic almost always ends up backfiring. "Words like everybody, always, and never, are broad generalizations," says communication coach Chad Elliot. They make your point unbelievable, while also angering whoever you're talking to. And that's not worth it.

8. Try To Be More Persuasive

During an argument, think like a salesperson and try to be as persuasive as possible. "Salespeople, speakers, and teachers have known that facts don't persuade, emotion does," says Elliot. To pull on the other person's heart strings, toss in some imagery or relate the story back to them. Hopefully they'll calm down and see things your way.

9. Use "I" Statements Whenever Possible

Instead of casting blame and saying things like "you did this" and "you did that," try using "I" statements. "An 'I' statement reduces others becoming defensive when bringing up a topic of concern," says counselor Jennifer Blanks (Artesani) M.Ed LMHC, in an email to Bustle. "If they feel defensive they really aren't going to try to solve this issue with you ... they are going to focus on defending themselves, which will not help you win the argument."

10. Respect Their Point Of View

It may be tough to stay respectful, especially when you vehemently disagree with what someone has to say. But the best way to keep an argument calm is to be as kind as possible. "Respectfully acknowledge the other person's view point, even if you don't agree with it," says wellness coach Erin Stair, MD, MPH. Say things like "I see what you're saying there," or "That's a good point." They might be so thrown off that you can walk away the winner.

If the other person is truly getting out of control, it's often best to disengage. "If someone is becoming too aggressive, a perfect phrase to drop is, 'If you say so.' That works like a charm," Stair says. "It's a classy way of disengagement ... and you also won't lose a friend or potential contact."

While it may be tough to keep your cool during an argument, staying calm, using "I" statements, and remaining respectful are some of the best things you can do. You may not want to focus on "winning" the fight, but you'll certainly come out on top if you're kind and respectful.

More like this
The Best Time To Date After A Breakup, According To Experts
By Bustle Editors
12 Ways You're Sabotaging Your Love Life
By Teresa Newsome and Lexi Inks
25 Things I've Reduced My Life To, In Addition To WFH In My PJs
By Ginny Hogan
The Spiritual Meaning Of The August 2022 New Moon
By Nina Kahn
Get Even More From Bustle — Sign Up For The Newsletter