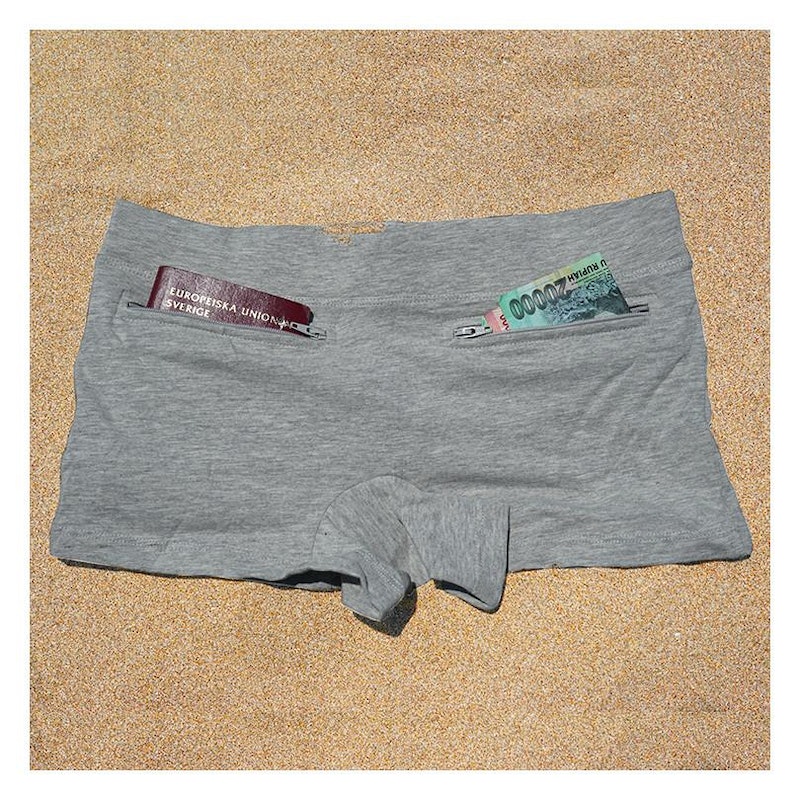 Shopping for underwear isn't the most exciting activity. You can usually just stock up on the same style in different colors and be set for months, or even years. But sometimes, your basic kind of underwear isn't exactly what you need for all occasions, which is when you need more useful underwear.

Sometimes you just need some weird underwear that is more practical than pretty. Maybe your period is super heavy one month, or maybe you are tired of traveling while wearing a dorky money belt, or perhaps you just want a pair of underwear that can discretely fold up and fit in your purse. Or if you're ever given the opportunity to wear a dress with slits up past the hips à la Kendall Jenner and you want to make sure that your important parts are covered without having visible straps. There's weird, but useful underwear out there for you.

Some of them are down right interesting, like the panties that have padding to prevent camel toe (cleverly named "Camel No"), and some of them are very simple, but still incredibly handy.

You probably aren't going to solve all of your problems with a basic pair of cotton undies, which is where these 11 weird but useful undies come in handy.

This one is a no brainer. Thinx panties can absord two tampons worth of blood, so you can wear them with or without a pad or tampon and not have to worry about leaking ever again.

This mini panty/slip from Bumbrella is the easiest way to get coverage under a dress without having panty lines. Plus they're comfortable too, unlike most slips that try to squeeze you in.

All of the convenience of a fanny pack, but hidden underneath your clothes, so you can keep money and your ID safe while traveling or at a music festival.

You will probably only need a strapless thong once in your life (unless you're Bella Hadid) but you can wear a skirt with a mile high slit and not worry about your underwear straps peeking through.

No one likes "chub rub," but you can prevent it with these shorts that are meant to be worn as underwear, meaning you can walk around all day without worrying about your thighs rubbing together.

These panties were made for disguising farts from guys (gross) but you can rest easy knowing that no odor whatsoever can escape these undies.

7. Panties That Fold Into A Pouch

These undies have a built-in pocket that you can roll them into, that way you can always have a fresh pair of underwear in your purse, because let's face it, sometimes you just need a spare pair.

Keep your random things secure all day long, whether it's cash or your house key when you go for a run.

Some people might wear these to fill out a particular outfit, but I just think they would make every day sitting situations exponentially more comfortable.

These undies are completely undetectable under clothes thanks to their seamless design and array of nude colors.

These padded undies hide all signs of a camel toe so you can rock any outfit with confidence.