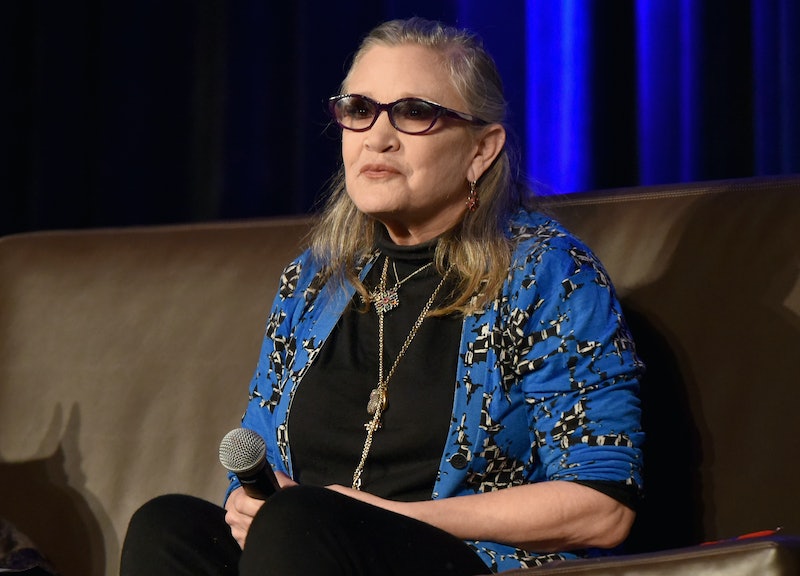 The world lost another accomplished, funny, and beloved person this week, when 60-year-old actress and writer Carrie Fisher passed away on Dec. 27, bathed in moonlight and strangled by her bra, following a massive heart attack suffered four days earlier. But, like everyone we've loved and lost in 2016, Carrie Fisher's best quotes from her books and movies will live on in our hearts. We loved her, and she knew.

But Fisher's scope extended beyond Star Wars and acting to include numerous books and screenplays. She authored three memoirs and three novels, and adapted two of her books — Postcards from the Edge and Wishful Drinking — for the screen. Her final book, The Princess Diarist, contains the diaries she kept while on the first Star Wars set, and made headlines earlier this year for finally confirming her affair with Harrison Ford.

Here are 12 of the best Carrie Fisher quotes from her books. After reading them, please be sure to share your favorite memories of our one and only Leia Organa Solo on Twitter.

More like this
10 Must-Read New Books Out This Week
By K.W. Colyard
10 Must-Read Books Out This Week
By K.W. Colyard
Viserys’ Fate On 'House Of The Dragon' Could Differ From The Book In This Surprising Way
By Grace Wehniainen
Read The First Pages Of Emma Rosenblum’s Highly Anticipated Debut, 'Bad Summer People'
By Samantha Leach
Get Even More From Bustle — Sign Up For The Newsletter