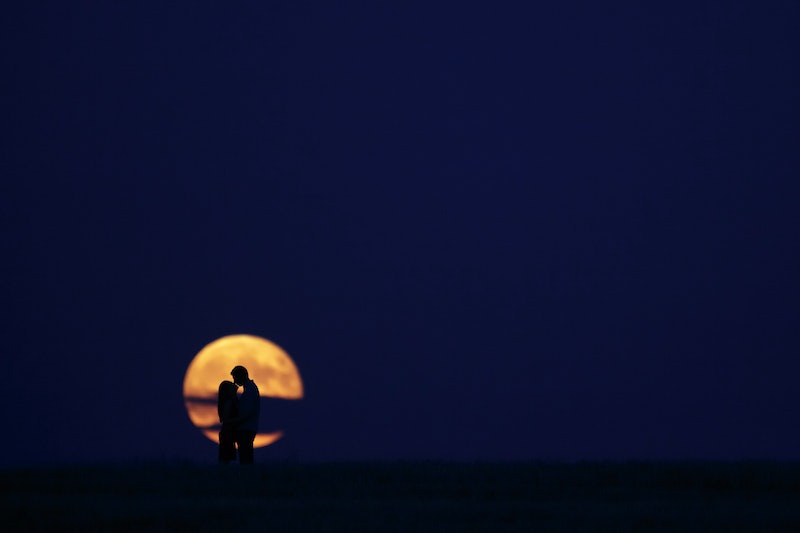 With summer most officially coming to an end with Thursday night's first post-autumnal equinox full moon, aka, the Harvest Moon, it is time to get into the fall groove. Perhaps there is no better way to celebrate the end of summer than to embrace the new season. And with a giant, orange-tinted moon hanging low in the October night sky, it likely won't be that hard to conjure some good feels.

For centuries, artists have found inspiration in the Harvest Moon. Something about the time of year and the spirit around this moon makes people feel compelled to depict it through word and song. There are so many poems, quotes, and lyrics that celebrate the Harvest Moon, and reading them today will certainly get you in the mood for the autumnal season. And as you step outside Thursday night to watch the full moon, and notice the cooler temperatures and leaves covering the ground, you might even be inspired to write your own ode to the moon.

Here are a few of my favorite quotes about the Harvest Moon, which is perhaps the most popular of all the moons in literature. Make sure you get outside to see the Harvest Moon in action — it's definitely something you don't want to miss.

1. "Under the harvest moon, when the soft silver drips shimmering over the garden nights, death, the gray mocker comes and whispers to you as a beautiful friend who remembers." — Carl Sandburg

2. "The harvest moon has no innocence, like the slim quarter moon of a spring twilight, nor has it the silver penny brilliance of the moon that looks down upon the resorts of summer time. Wise, ripe, and portly, like an old Bacchus, it waxes night after night." — Donald C. Peattie

3. "The merry-go-round was running, yes, but... It was running backward. The small calliope inside the carousel machinery rattle-snapped its nervous-stallion shivering drums, clashed its harvest-moon cymbals, toothed its castanets, and throatily choked and sobbed its reeds, whistles, and baroque flutes." — Ray Bradbury

4. "Harvest moon: around the pond I wander and the night is gone." — Matsuo Basho

5. "It is the Harvest Moon! On gilded vanes and roofs of villages, on woodland crests and their aerial neighborhoods of nests deserted, on the curtained window-panes of rooms where children sleep, on country lanes and harvest-fields, its mystic splendor rests." — Henry Wadsworth Longfellow

6. "The flame-red moon, the harvest moon, rolls along the hills, gently bouncing, a vast balloon, till it takes off, and sinks upward to lie on the bottom of the sky, like a gold doubloon. The harvest moon has come, booming softly through heaven, like a bassoon. And the earth replies all night, like a deep drum." — Ted Hughes

7. "Every fifteen minutes or so the harvest moon would bleed through the tourniquet of cloud cover that conspired to squeeze every droplet of pictorial sentiment out of the Skagit landscape in order that a more refined Chinese moon might brush the countryside. In the aloof washes of moonlight no form seemed to stir." — Tom Robbins

8. "Shine and shimmer my Harvest Moon, illuminate the shadows in the sky." — A.F. Stewart

9. "Summer was over, no more sleeping under an open window. The wind ruffled the grasses, swayed in the hedge. A light came on across the way. I thought: that can’t be good, news that comes in the dark." — Theo Dorgan

12. "I hear the night train singing in the distance/Maybe the angels are coming soon/With the harvest moon if the river's rising/Look to the dark horizon/For the harvest moon." — Bedlam