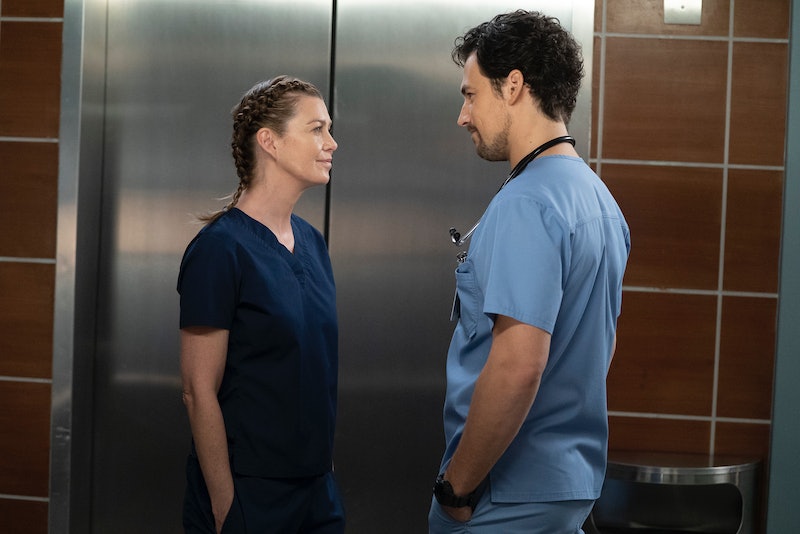 Grey Sloan Memorial Hospital may have an overactive revolving door, constantly admitting and ushering out hundreds of patients, doctors, and interns over the years. But if there's another mode of transportation that gets quite a workout, it's definitely the elevator. Elevator scenes on Grey's Anatomy are a staple of the long-running procedural, and have been since the very beginning.

There's a reason for this: the confined space offers privacy for everything from makeout sessions to tearful confessions. It offers a sense of movement in an otherwise static scene: a sort of vertical version of The West Wing's famous walk-and-talks. And, as The Ringer's Michael Baumann points out, it also offers a unique framing device: an elevator is one of the few places in which everyone stands facing the same direction, allowing audiences to see the reactions on multiple people's faces without cutting between different camera angles.

Of course, fans will remember that the Season 15 winter finale ended with a new classic elevator scene, with basically half the cast trapped in perilous situations when the power went out at Grey Sloan and all the elevators got stuck between floors. Before the show resolves that cliffhanger on Jan. 17, let's take a trip down memory lane at some of the most iconic elevator scenes in Grey's Anatomy history.

1. The First Trip Is The Steamiest

Season 1, Episode 2: "The First Cut Is The Deepest"

It didn't take long for the show to establish the elevator (along with the hospital's many on-call rooms) as the prime location for clandestine kisses… like this early moment when Meredith just couldn't restrain herself around her McDreamy boss.

2. Surgery In The Elevator

Sometimes the most interesting elevator moments happen when they fail the doctors and patients — such as this scene where the car George and Alex were riding in got stuck in between floors and "Bambi" was forced to perform open heart surgery right there.

Of course, the elevator isn't always about high passion or high stakes; sometimes it can be a moment for quiet introspection as well. In this scene, Bailey respectfully stopped the elevator to let Derek take a moment after he lost a patient in a particularly difficult case.

A blonde, a brunette, and a redhead walk into an elevator… what seems like the beginning of a good joke is the beginning of a waking nightmare for Derek, when all three of his romantic interests: ex-girlfriend Meredith, ex-wife Addison, and current squeeze Rose all crowd with him into the same cramped box. Mark's laugh when he sees them all crammed in like awkward sardines is priceless.

This somewhat "meta" episode served as both a love letter to Derek and Meredith's relationship — and a love letter to the elevator itself, the scene of so many indelible moments over the years. Derek finally proposed to Meredith in the elevator where they shared one of their first kisses way back in Season 1, plastering the walls with x-rays of all of the cases they'd worked on together over the years. *swoon*

They talk about a stairway to heaven, but on Grey's of course you'd take an elevator to get there. One of the most heart-wrenching elevator scenes didn't even take place in the real world, but in the afterlife, as a dying Izzie rode the elevator in her Season 1 prom dress to meet her dying best friend George. *sobs*

7. A Kiss Is Worth A Thousand Words

The chemistry between Callie and Arizona speaks for itself. Like literally, no words are needed to explain their passion. Why do you think they were such a fan-favorite couple?

Another case of the trusty elevator failing our doctors to tragic consequences. Who could forget the time a gunman invaded the hospital and shot Dr. Percy, only for the surgeon to die in Bailey's arms after she couldn't get him to the operating room thanks to the elevators being on lockdown? I still have nightmares about this episode.

A tearful monologue followed by a bombshell pronouncement: these are the things great Grey's scenes are made of.

One of the best examples of using the awkward staging of an elevator ride to great advantage. Since they're facing the same direction, Cristina doesn't have to hide her emotions as Owen delivers the devastating news that he's moving out. And to believe Sandra Oh never won an Emmy for Grey's!

11. Glasses Gets An Education

It only took a decade and a half, but Grey's finally gave viewers its first kiss between two gay male surgeons… so of course it had to happen in the iconic elevator, where all the best smooching happens.

12. Stuck In The Middle With You

This scene is the most elevator scene out of all the elevator scenes. Literally: it features not one, not two, but three different elevators getting stuck when the power goes out, trapping several doctors in perilous situations.

Surely, there are more steamy and awkward (and profound!) elevator scenes to come in Grey's future. At this point, those elevators are more iconic than the ORs.