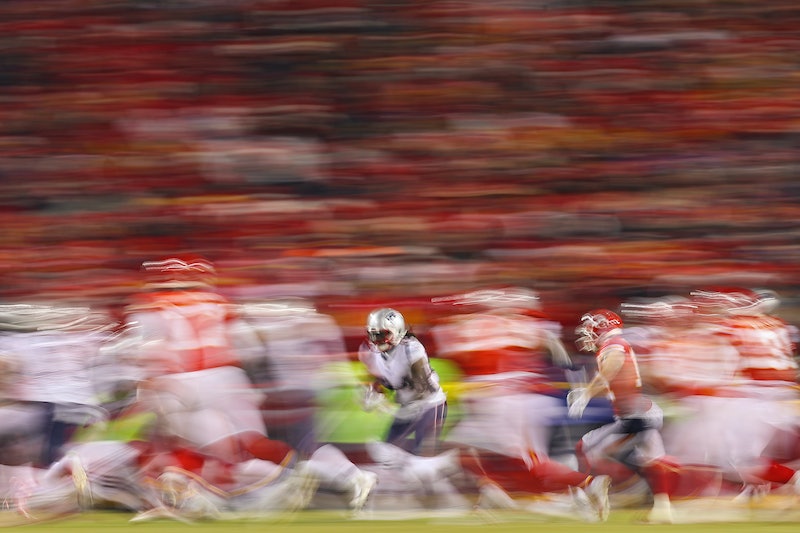 On Sun. Feb. 3, at 6:30 p.m. ET, the New England Patriots will play the Los Angeles Rams in the LIII Super Bowl games. This is very exciting news for football fans, but also an equally important reminder for social media fans to get ready for their own game. Duh, the Instagram peak posting games. Basically, I'm saying that you better have some Patriots Super Bowl Instagram captions ready to go, because when (if) that big win comes in, you're going to want to post about it.

No matter how the game goes down, football fans are going to be turning to their phones on time outs and commercial breaks, and Instagram fans will likely just be on their phone the whole time especially if they have no interest in the game (I'm talking about myself here). So to get in on the social media action, you'll want some epic captions stored up so that you're not held back from posting with writer's block. Here I've pulled together a list of Super Bowl-related quotes that make for perfect Instagram captions. They range from inspirational, to comical, and they're all the perfect complement for a game time post. May the best team win, and may all of your game day posts get record likes.

"Ultimately, the joy of sports is social and psychological, both in the ballpark and around a television on Super Bowl Sunday."- Mary Pilon

"You never get over losses. I’ve never gotten over one loss I’ve had in my career. They always stick with me." - Tom Brady

Mental toughness is going out there and doing what's best for the team - even though everything isn't going exactly the way you want it to." - Bill Belichick

"There is no substitute for work." - Vince Lombardi

"I don't follow football, but I always watch the Super Bowl." -Melissa Fumero

"That's the biggest gap in sports, the difference between the winner and the loser of the Super Bowl." - John Madden

"Every game I've ever played, regardless if it was pre-season or Super Bowl, meant the same to me, and I laid it all on the line." -Brett Favre

"At the end of the day, it's not about starting a game in the NFL, winning a Super Bowl, or getting to the Hall of Fame. It's about representing yourself in a way that represents your faith." - Kurt Warner

"...A lot of mental toughness by our team, a lot of physical toughness. We played against a phenomenal defense and we just ultimately made enough plays. We made a couple of crappy plays – I certainly did – but we made enough plays to win." - Tom Brady