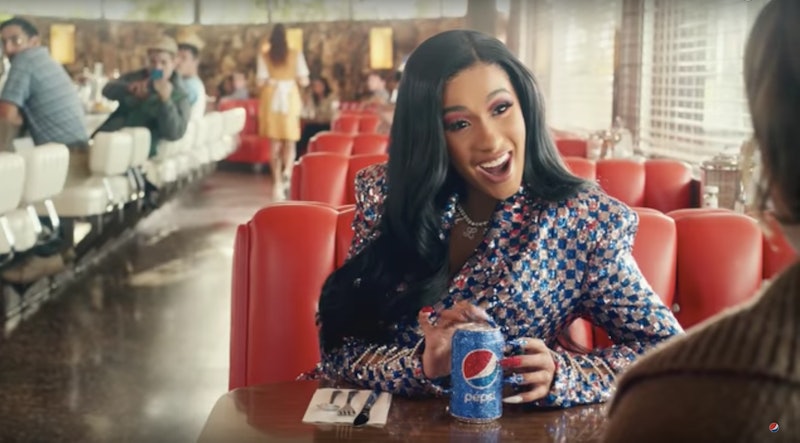 Cardi B's catchphrase is finally getting the spotlight it deserves. Steve Carell and Cardi B's Super Bowl Pepsi ad is here, but the rapper's signature "Okurr" is really the star of the show. On Monday, the soda brand released a 30-second and 60-second version of the ad, which also includes Lil Jon and his iconic catchphrase "OK." By the time Super Bowl LIII comes on Sunday, viewers, like Carell, will be on a mission to coin an epic catchphrase of their own.

Cardi first teased the Pepsi ad on her Instagram four days before it was officially released on YouTube. Fans got a peek at what was in store from the short clip showing Cardi strumming her long blue and red nails on a Pepsi can before closing with an "Okurr." In the actual ad, a waiter asks a diner customer, who asks to order a Coke, if a Pepsi is OK instead. Carell adamantly gets up from a neighboring booth asking if things like shooting stars and puppies are OK. To drive the point home that Pepsi is "more than OK," Cardi and Lil Jon swoop in with their respective coined lingo to give their seal of approval.

And (seemingly) the full, minute-long version:

Pepsi also released a 35-second Carell mashup ad in which the actor role plays with the waiter. He goes on asking if more amazing things —like smiling and landing on the moon — are OK, to prove that Pepsi is way more than just OK. While The Office star leads the ad, he's still in need of his very own catchphrase, obviously inspired by Cardi and Lil Jon. At this point, both of the rappers' catchphrases are pop culture staples of their own.

When Cardi's catchphrase started becoming wildly popular in late 2017, thanks to her very entertaining Instagram, there was actually debate over whether Cardi or Khloé Kardashian started "Okurr." For example, Stranger Things' Millie Bobby Brown impersonated the "Okurr" when visiting The Tonight Show in November of that year. While she had the catchphrase down, she actually referenced the Kardashians' own language and their use of it on Keeping Up With the Kardashians.

Then, last April, Cardi explained her "Okurr" usage to Jimmy Fallon. "If somebody checks somebody, it's like, Okurr!" she said. "I didn't know she had all of that in her, Okurr! It's like OK, but OK is played out. We've done that already." Turns out, however, that "Okurr" originated from drag culture and was made even more popular by RuPaul's Drag Race, as explained on Urban Dictionary.

Lil Jon's "OK" catchphrase is also legendary and is actually part of the entire catchphrase, "Yeah! What? OK!" Although they're totally basic words, the art of making them a catchphrase is how they're said by Lil Jon. The trio of words appears in many of his songs and "OK" is part of the opening lyrics to Usher's 2004 hit "Yeah!"

With the Super Bowl around the corner, these taglines will have viewers saying OK for days. Anyone else sensing a social media catchphrase challenge?