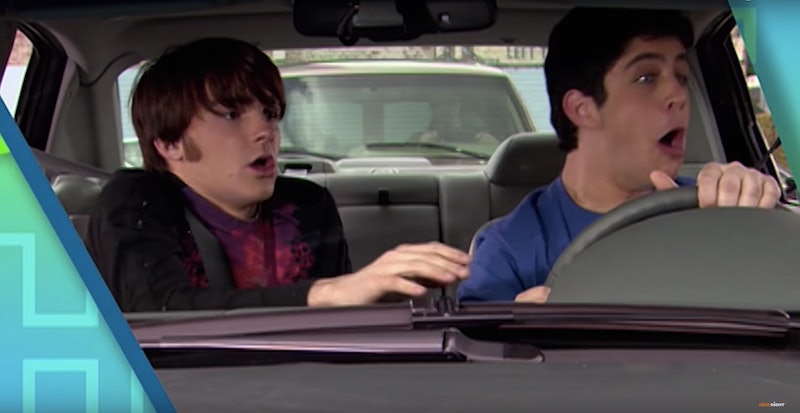 Back in 2004, a little show called Drake & Josh premiered on Nickelodeon and rocked fans' worlds for three years. The comedy series now lives on through hilarious GIFs, and unfortunately, recent drama between its costars Drake Bell and Josh Peck. But drama aside, the show should live on regardless, since Drake & Josh is hilarious and iconic in its own right.

The series portrays the journey of two new stepbrothers, who's personality are complete opposites, yet they eventually become buddies through their wild antics. The show's physical humor takes otherwise boring life scenarios and makes them crazy-entertaining, while also capturing life as a teen. Perhaps what makes the show so unique is its unapologetic tendencies to get seriously goofy and unconventional. And obviously, everyone who watched wanted to be BFFs with Drake and Josh.

However, the two have seemingly parted ways as friends in real life, which was highlighted by Peck's wedding in June. Reportedly, other people involved in Drake & Josh were invited to the wedding, but Bell was not. A since-deleted tweet from Bell read, "True colors have come out today. Message is loud and clear. Ties are officially cut. I'll miss you brotha." Peck has also admitted the two aren't friends in real life any more.

Sure, fans are weeping, but Drake & Josh will always be there for them. The show's greatness is highlighted in the reasons below.

More like this
Why You Loved 'One Tree Hill' So Much — And Still Do
By Sabienna Bowman and Radhika Menon
Emma Thompson, Lashana Lynch, & Stephen Graham Lead Netflix’s 'Matilda'
By Sophie McEvoy
The 'Hocus Pocus' Sequel Finally Has A Release Date & It Makes Total Sense
By Shannon Barbour and Radhika Menon
Everything To Know About 'My Big Fat Greek Wedding 3'
By Grace Wehniainen
Get Even More From Bustle — Sign Up For The Newsletter