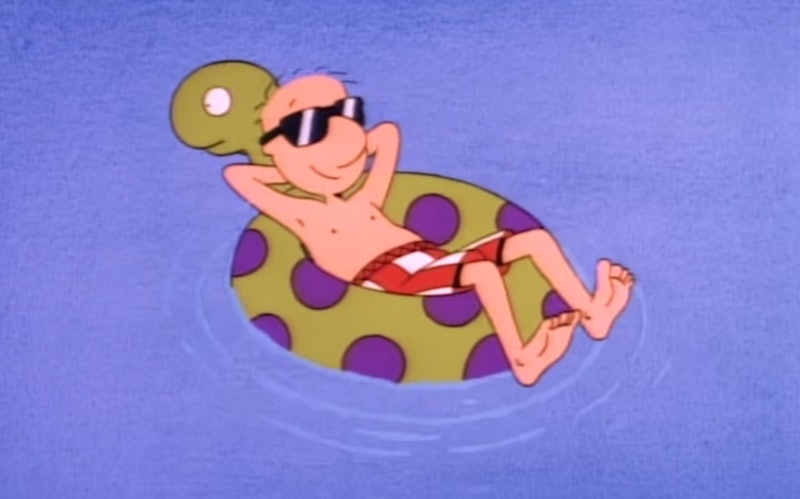 There's nothing like the summer to remind you of just how amazing your favorite childhood cartoons were. Lately, it seems like Nickelodeon and Netflix, in particular, agree. Thanks to Nick and the streaming giant, Rocko's Modern Life, Hey Arnold!, The Magic School Bus, and Animaniacs are all scheduled to make comebacks soon. Hollywood shouldn't stop there — the '90s were full of cartoons that need to return, because some shows are just timeless.

As a generation that grew up with top-notch cartoons, it's the duty of adult '90s kids to make sure modern children have their own version of Doug. Sure, part of the yearning for reboots is nostalgia-driven, but there's no denying cartoons had a major moment when you were a kid. It wasn't just the shows on Nickelodeon or Disney either. Nearly every channel was producing quirky, addictive programming for kids.

Thanks to Adventure Time, Steven Universe, We Bare Bears, and The Loud House, TV is still full of quality animated series. There's always room for more though, and these 13 '90s cartoons seem particularly worthy of the reboot treatment. Their heart, creativity, and humor helped define a decade, and they deserve a chance to work their magic on today's tech-savvy youth. From Doug to Gargoyles, these '90s cartoons need to make a comeback.

To know Doug Funnie is to love him. With his big imagination and realistic tween problems, the character was the perfect guide through those confusing middle school years. Whether he was dealing with body image issues or embarrassing himself by trying to impress his crush, Patti Mayonnaise, Doug's struggles were always relatable.

2. Where On Earth Is Carmen Sandiego?

The world can always use more cool, female antiheroes who teach kids about geography, If she happens to sport the most amazing trench coat in all the land, that's even better.

OK, so Looney Tunes isn't as popular as it once was, but that's all the more reason to bring back Bugs, Daffy, and the rest of the gang's descendants. Tiny Toons was smart, wonderfully silly, and full of pop culture nods that made kids feel like they were in the know.

This Cartoon Network classic is a treasure. Young genius Dexter is the perfect protagonist. But despite the charm of his grand plans, it was the constant conflict his sister and foil, Dee Dee, caused that made the series so entertaining.

Ickis, Oblina, and Krumm's plight to scare the pants off humans had it all — a secret world existing right under people's noses, monsters attending scare school, and just the right balance of heart and spookiness to keep kids entertained.

The politics of recess will never change. That's exactly why the world needs more of this classic cartoon about how to survive the playground life.

Spoon! No cartoon is more eccentric or hilarious than this story of a slightly unhinged superhero and his sidekick Arthur. In this age of superheroes, The Tick needs to make a triumphant, animated return.

Part adventure story, part family comedy; this animated series had everything you could possibly want out of a TV show.

No other cartoon defined the '90s quite like Rugrats. That's all the more reason to give it a modern update — especially when you consider that Tommy and his pals could realistically have kids of their own by now.

It's time for this generation to learn that Nigel Thornberry is more than a meme.

The genius of a show about a mad scientist mouse determined to take over the world and is goofy sidekick is hard to explain, but if you've seen the show, then you know there's nothing else quite like it.

Not only did Pepper Ann have one of the catchiest theme songs ever, it also had a hero whose tween foibles are timeless. The more episodes of Pepper Ann there are in the world the better.

Dark and intricately plotted, this fantasy series is a cult classic for a reason. It's time for Goliath's story to continue.

These '90s cartoons need to make their triumphant return to TV, ASAP.