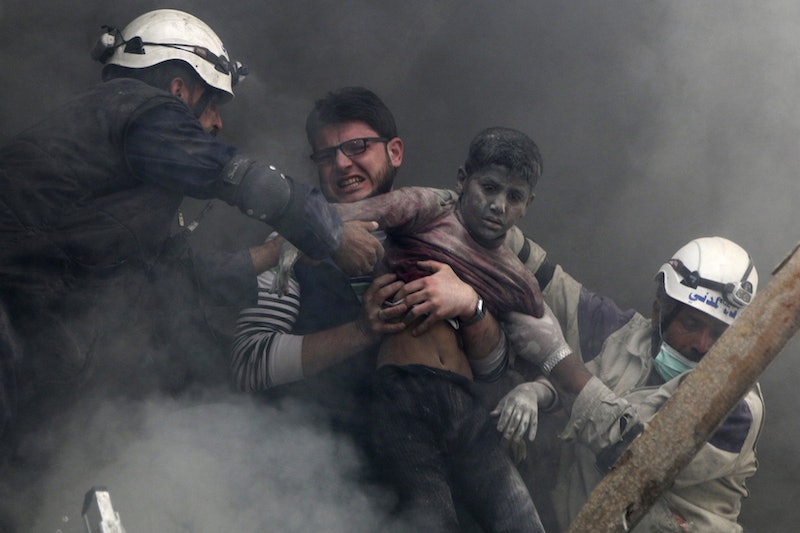 Right now, we're all experiencing a major case of information overload. We turn on the news and see images from the Syrian civil war, with different groups trying to seize control of the country. Meanwhile, on the other side of the world, Facebook CEO Mark Zuckerberg sits before Congress to discuss how the company collects and uses data for advertising purposes. All this info can be a lot to take in, and some of it is complicated enough that it can be hard to fully understand. But that's where the media comes in — specifically, movies. Documentaries about what's going on in the world are a great way to take in the news and get a firm grasp on some of society's toughest subjects.

The 13 films below are all streamable, and all worth a watch. They cover subjects ranging from gender inequality to war to the economy, and if you're on a mission to get a deeper comprehension on headline-making situations, these movies are key. With all that's going on in the news these days, take the time to check out these docs; they'll absolutely increase your understanding of the world around you.

1. Hell On Earth: The Fall Of Syria And The Rise Of ISIS

Hell on Earth: The Fall of Syria and the Rise of ISIS showcases the conflicts raging in Syria, Iraq and parts of the Western world. The film chronicles Syria's complicated political history and how that troubled past led to the rise of the Islamic State in the country.

The Syrian civil war is seen through the eyes of a volunteer group called the White Helmets, who offer aid to wounded and trapped civilians. Last Men in Aleppo is a devastating look at how Syrians are fighting to stay alive during a a lengthy, violent conflict.

3. Lo And Behold: Reveries Of The Connected World

Lo and Behold: Reveries of the Connected World looks into how the internet may alter our future, how it become so prevalent, and how it affects our present lives in ways both positive and negative.

Detropia dives into what the American dream looks like today for the city of Detroit. The film follows the dissolution of the middle class, job loss in the industrial career sectors, and the decrease in population, painting a clear picture of a city suffering due to the state of the economy.

The Square looks at the 2011 Egyptian Revolution from the perspective of those who were on the frontlines of the movement. It follows grassroots organizations facing obstacles while trying to build a democracy.

Fire at Sea documents the months some refugees spent fleeing Africa and the Middle East. It focuses on Italy's island of Lampedusa, 100 miles south of Sicily, and gives a glimpse at the hundreds of thousands of refugees who enter the country looking for safety.

13th, directed by Ava DuVernay, gets its name from the 13th Amendment of the U.S. Constitution, which gave all Americans freedom. Although slavery was abolished 153 years ago, the movie details how racism is connected to the ways Black citizens are convicted and sentenced for crimes.

Cartel Land focuses on Michoacán, a Western Mexican state, in the trenches of the Templar Knights cartel takeover. At the center of the movie is Dr. José Mireles, a man who decided to fight back against the drug cartels in his community by creating the Autodefensas, a vigilante group trying to take back their streets.

Civil rights attorney Gloria Allred has been called a feminist crusader for decades, and Seeing Allred explores how her 40 years of legal work has shaped our political landscape. Although the movie follows Allred, the documentary also sheds light on women's rights overall and victims of gender-based crimes.

Tamta Gabrichidze’s documentary centers on the Republic of Georgia's poor economy, explaining how produce can be more valuable than actual money in the Eurasian country.

Terms and Conditions May Apply exposes the issue of online privacy and what information the government and corporations are taking from citizens legally on a daily basis.

Risk is all about the infamous man behind WikiLeaks, Julian Assange, who'd lived a very interesting life.

Directed by Bryan Fogel, Icarus explores the world of doping in Olympic sports, which is currently a major issue due to Russia being banned from the Winter Olympics.

Block out some time to watch all of these documentaries — you're not going to regret learning more about the world we live in.