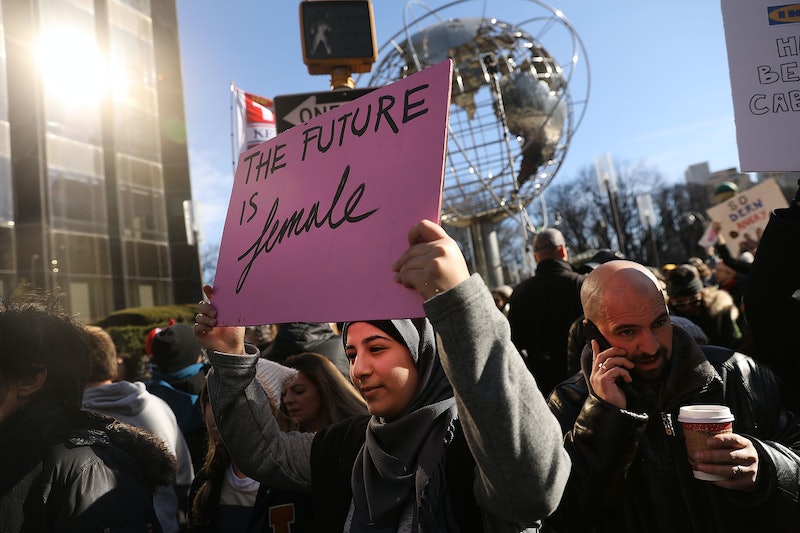 Odds are if you're recognizing the history of August 26 this year, you might be looking for empowering National Women's Equality Instagram caption ideas to drive your sentiments home. And with good reason — the day marks a very important celebration and perfect way to end the summer feeling pumped to kill it at work or school during the next year. It commemorates the anniversary of the 19th amendment, adopted in 1920 to give women in the United States the right to vote. Women's Equality Day was first celebrated in 1973, and since then it has been proclaimed by the U.S. president each year. As women, our movement for equality has come a long way since 1920 — but there is still an incredible amount of work to be done.

Women's Equality Day is so significant because it promotes a sense of solidarity that makes the women's movement all the more powerful. When women work together to recognize and uplift each other in a way that emphasizes intersectionality and the freedoms that women in every walk of life deserve, change happens. We reflect on the triumphs we've made so far to light the fire we need to keep going. Barack Obama phrased it well in his 2016 Women's Equality Day proclamation: "As we celebrate the anniversary of this hard-won achievement and pay tribute to the trailblazers and suffragists who moved us closer to a more just and prosperous future, we resolve to protect this constitutional right and pledge to continue fighting for equality for women and girls."

Here are 13 other inspiring quotes that you can share on National Women's Equality Day that capture the same spirit.

2. "Feminism isn't about making women strong. Women are already strong. It's about changing the way the world perceives that strength." — G.D. Anderson

3. "I am a Woman Phenomenally. Phenomenal Woman, that's me." ― Maya Angelou

4. "I am not free while any woman is unfree, even when her shackles are very different from my own." — Audre Lorde

5. “Blessed be she who is both furious and magnificent” ― Taylor Rhodes

6. "It took me quite a long time to develop a voice, and now that I have it, I am not going to be silent." — Madeleine Albright

9. "Making it through the ceiling to the other side was simply a matter of running on a path created by every other woman's footsteps." — Shonda Rhimes

10. "If one man can destroy everything, why can't one girl change it?" — Malala Yousafzai

11. "People think at the end of the day that a man is the only answer [to fulfillment]. Actually, a job is better for me." — Princess Diana

13. "We've chosen the path to equality, don't let them turn us around." — Geraldine Ferraro