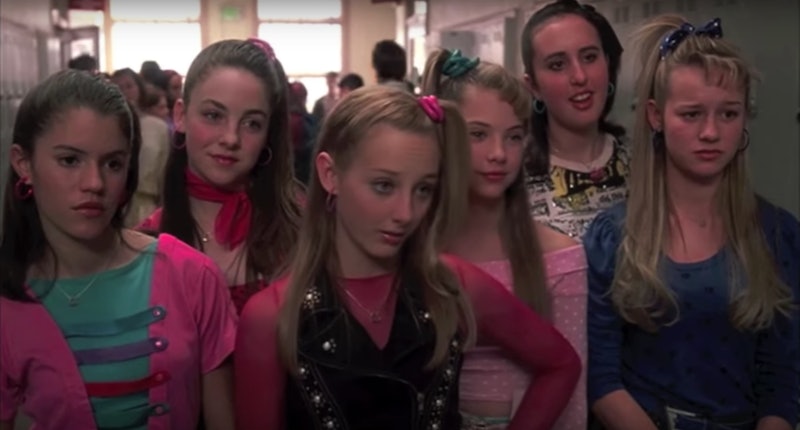 13 Going on 30 didn't invent the mean girl clique, but it certainly set a high standard. The 2004 comedy's Six Chicks, a group of intimidating and cool teens who rocked side ponytails and the brightest outfits imaginable, appeared in 1987-set flashbacks to humiliate fellow 13-year-old Jenna Rink (Christa B. Allen). The gang was a biting representation of teenage cruelty, but while they may have been modeled after real mean girls, the actors behind the Six Chicks were anything but. To celebrate 13 Going on 30's 15-year anniversary, Allen, plus Six Chick members Alexandra Kyle, Brittany Curran, and Julia Roth, and the film's co-writers Josh Goldsmith and Cathy Yuspa, gave Bustle the inside scoop on all things Six Chicks.

In the 15 years since 13 Going On 30's release, many of the young cast members have found significant success. Brie Larson, an Oscar winner and Marvel heroine, was a Six Chick, as was former Pretty Little Liars star Ashley Benson. Meanwhile, Allen had a lead role on ABC's Revenge, Roth and Kyle are acting, writing, and producing their own content, and Curran is currently starring on The Magicians. With staying power like that, it's no wonder that the Six Chicks have become so iconic. Looking back with Bustle, the all agree: making 13 Going on 30 and acting in scenes before Jenna's famous wish to become "30, flirty, and thriving" came true was nothing but fun.

The First Day Of (Fake) School

After Young Jenna, Young Matt, and four of the Six Chicks were recast, Kyle and Roth ended up returning for reshoots, filming scenes again along with the new set of actors.

Alexandra Kyle (Young Tom-Tom): It was actually pretty bizarre because the set was exactly the same, but the cast was suddenly new, and they even changed our wardrobe and our hairstyles... it didn't feel like the first day at all.

Julia Roth (Six Chick): The funny thing was, I was a little bit more pre-pubescent [the first time we shot scenes], so I looked more like I was 13, and then by the time we filmed the second time, I had developed, I was really tall... I went back to the wardrobe department, and they were like, "Oh, I guess we need some new outfits for you."

Brittany Curran (Six Chick): The first day on set, the Six Chicks already kind of knew each other, and everybody was nice — there was no ego or anything. I remember calling poor Christa... Jenna, which was her character's name. And I remember one time she finally got frustrated and we were all in the cast van together at Sony and she's like, "Brit, my name is Christa." And I was like, "oh my god, I gotta get that straight." I felt so bad.

Christa B. Allen (Young Jenna): For some reason, they decided to film the “Thriller” dance scene, where she dances in the basement — first. On the first day, that was my first scene on the set of a major motion picture... I was shaking and terrified, and needless to say everything after that was a lot easier.

Every mean girl clique has a uniform. For the Six Chicks, that meant complete '80s wardrobes, with neon leggings and big scrunchies.

Allen: It was certainly my introduction to ‘80s fashion. But the way [costume designer Susie DeSanto] would play with the outfits was so inspiring. And, of course, in the ‘80s, you had so many options for accessories. You had the waist belts, you had the big jewels on everything, patterns, bright colors, the high-top converse, the leggings.

Josh Goldsmith & Cathy Yuspa (screenwriters): We'd like to think we had a hand in slowly bringing the scrunchie back.

Roth: As soon as we started trying everything on, and everybody was in these costumes, it felt fun and it felt playful... it was really the camaraderie within the cast, within our little group, that made it really comfortable.

Curran: One of my favorite outfits was this black and red plaid skirt with these little black suspenders and a red shirt... I just remember my character had like a little bit more of an edge to her wardrobe. And I always loved that. I was obsessed with my wardrobe. I wish I still had it.

Allen: Seeing the six of them together, of course they were meant to be very put together and very cool and very striking. And many of the girls, Brie Larson included, were very tall. And so to see those six girls together just so effortlessly beautiful and put together in their ‘80s fashion — it was really striking.

The group was only on set together for a handful of weeks, but it was enough time for them to bond off screen. They attended set school together, and even took part in a few photoshoots to show off their '80s looks.

Allen: We were always teasing around — because it was obviously us seven girls — the two boys. So, we would kind of gang up on the boys, and tease them. There’s this one photo of all of us holding up Sean Marquette, who played young Matt.

Roth: It was just like hanging out with my friends. It was fun, and people had crushes on each other, people had inside jokes.

Curran: Ashley Benson and I had become really good friends on set and some days we would drive home to my house together... and we'd have sleepovers. I think I still have a pair of her yellow pajama bottoms somewhere in my storage unit, because I was at her house one night and I didn't have any pajama bottoms. She was like, "Here, wear these." And I don't think I ever gave them back, and I literally think they're in my storage unit in Burbank right now.

Allen: [It was] just lots of girly, behind-the-scenes chatting and gossiping, telling stories like girls do.

The Intro To Jennifer Garner

For most of these actors, 13 Going on 30 was their first film, and that meant their first time working with a real movie star. Though they didn't share scenes with Garner, many cast members vividly remember meeting her on set.

Roth: She is the nicest person I’ve ever met on the planet. She is so incredible and committed. She had a sleepover really early on to do research, and I was a part of that sleepover. And we stayed up all night and made s'mores and did each others makeup.

Allen: The producers really wanted me to get a grasp of Jennifer Garner and her demeanor and feel her energy so I could really play her... they shuttled [my mom and I] out to Jennifer’s house, and I got to have a nice little chat one-on-one with Jennifer... and she was so sweet and so welcoming. And, I’ll never forget, as soon as we arrived, we sat down in her living room, and she was like, "Can I get you guys anything to drink, do you want a water, soda?" And as she was walking into the kitchen, she just turns and looks over her shoulder and goes, "I make a hell of a latte." My mom and I were just cracking up! And that’s the same Jennifer that I see on social media today. She’s just so warm and welcoming and inviting and genius in the kitchen.

Kyle: Jennifer would come to set even though she didn't have any scenes that day... I feel like I have a memory of her cheering us on from behind camera. There was some scene and she was just like, "you guys did such a great job," and [I remember] thinking, "Wow, she's exactly what you think she's going to be in real life."

Curran: I asked the producers one day if it will be OK if I came to set for an hour the next day when Jennifer Garner was working, just to say hi... So I came to Sony the next day, and I just hung out at Video Village on a director's chair with the producers, and I just waited patiently for her. And when she had a break... she came over, and I remember... she was just the nicest.

The Six Chicks might have been young, but they were vicious. And that was never more evident than in the party scene, in which the girls attend Jenna's 13th birthday bash solely to get her to do a report for them, and then abandon her. It's every geeky girl's nightmare, which made it a tough scene to shoot for some of the actors.

Roth: When I watch those scenes again, I can see myself trying really hard, because I wasn’t really sure what it was like to be in that kind of clique.

Curran: I'm so disgustingly empathetic in real life... and so it's very odd that actually playing the mean girl b*tch comes really naturally to me.

Allen: When you’re in that moment, and you’re faced with quite literally a wall of people being mean to you — acting or not, you do feel the energy.

Curran: Admittedly, I would have wanted to be a Six Chick [when I was 13] because the idea of being cool and stylish and having a lot of friends is exciting... But the price to pay, which is being a complete assh*le to everybody, would not have been worth it for me.

Kyle: I think at 13, I wanted the idea of it. But if I had known what that really meant, I wouldn't have.

Allen: When I was 13, absolutely. Now? No way. Now I love who I am, and I love who I was even then as an awkward teenager. I think I had it going on and I didn’t know it.

In the 15 years since the movie, many of the actors have stayed in touch, although they don't see each other as often as they might like — understandable, given everybody's busy schedules and Hollywood success.

Allen: Brie Larson and I used to chat on AIM all the time when AIM was a thing, but no longer… I still remember her screen name but I won’t rat her out, not that she has AIM anymore... it was a reference to her favorite lip gloss, I’ll say that.

Roth: [Allen] and I reconnected not too long ago on Instagram. And it’s amazing to see where everybody is now — I mean, hello, Brie Larson, hello Ashley Benson. Because all I remember of them was that they were so fun and great!

Curran: [Kyle and I] went and had coffee together... and we were like, "Oh my god. We're like, 30 now and the last time we saw each other, we were playing 13-year-olds in 13 Going On 30." It was the most surreal moment, and we are now friends again.

Roth: The initial response [to the movie] was huge and was really fun, and people would say my lines back to me... I heard someone saying last night, "30, flirty, and thriving" — and I said it the day I turned 30. It’s amazing that it’s really stuck this long.

Yes, we can — 13 Going on 30, and the Six Chicks, are both absolutely modern classics.

More like this
Daryl McCormack On His Unusual First Audition With Emma Thompson
By Olivia-Anne Cleary
Everything To Know About 'My Big Fat Greek Wedding 3'
By Grace Wehniainen
Emma Thompson, Lashana Lynch, & Stephen Graham Lead Netflix’s 'Matilda'
By Sophie McEvoy
15 Intriguing Movies On Netflix That Are Based On True Events
By Mary Kate McGrath, Shannon Barbour and Grace Wehniainen
Get Even More From Bustle — Sign Up For The Newsletter