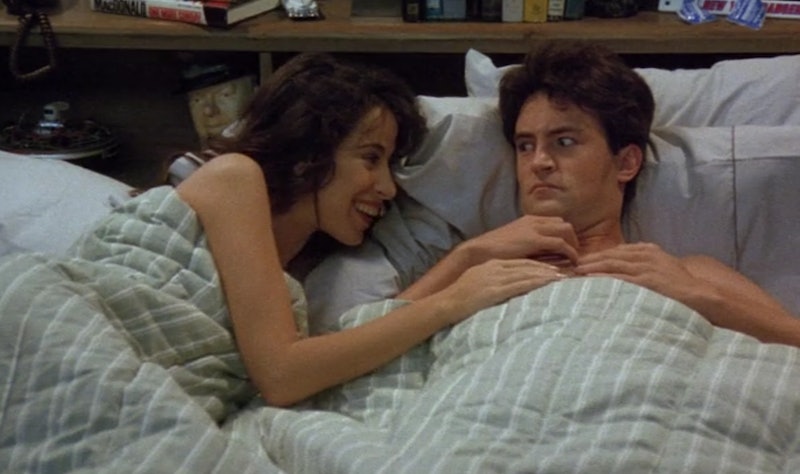 When Friends ended in 2004, nearly everyone had found their romantic partner and they were off to live happily ever after. In the 10 seasons leading up to this conclusion, however, the Friends characters' love lives were full of a lot of mistakes. This was particularly true in the early seasons, when Ross had still only been divorced once and Chandler and Monica had yet to turn their hook-up into a lasting relationship. While Joey might have been the reigning ladies' man of the group, all six were constantly rotating through new relationships, many only lasting one (or two) ridiculous dates.

If you've re-watched these early seasons recently, you probably noticed that most episodes features at least one of the friends romantically entangled with an over-the-top guest actor. Or maybe one of the core characters found a new partner in a truly bizarre way. Like, what was up with Rachel dating her friend's partner's dad? Why was Phoebe always attracted to the weird people who were obsessed with her twin sister Ursula? Why was Chandler so unlucky with women — and why did Joey keep charming them despite not treating them very well after he did?

We may never have the answer to any of those questions, but, nevertheless, here are some of the funniest dates that the Friends ever had.

1. When Rachel Dated A Ross Lookalike

His name is Russ, and he's not Ross, you guys. Though he is also played by David Schwimmer. (Season 2, Episode 10).

Considering Chandler met Marjorie at a sleep clinic, he probably should have seen this coming. But her ability to scream and then go right back to sleep is truly impressive. (Season 4, Episode 20).

Katie just wants to show her approval for Joey by giving him friendly punches on the arm, but she doesn't know her own strength. (Season 5, Episode 15).

4. When Ross Dated A Total Slob

Years before Hoarders debuted on television, there was Cheryl (Rebecca Romijn), a beautiful woman who shared Ross's love of paleontology and also happened to have an apartment filled to the brim with old stuff. Watch your feet, her hamster has to roaming the place somewhere. (Season 4, Episode 6).

We get it, Parker (Alec Baldwin). You're just a really positive guy, ready to compliment everything from the comfortableness of a couch to Phoebe's arguments for why they should break-up. You can stop talking now. (Season 8, Episode 18).

6. When Chandler Couldn't Remember Which Of Joey's Sisters He Kissed

After drinking vodka jell-o shots, Chandler couldn't remember if he fooled around with Mary Angela or Mary-Therese. None of them — or Joey — takes that well. (Season 3, Episode 11)

7. Phoebe Set Rachel Up On A Deliberately Bad Blind Date

Near the end of the series' run, Phoebe is trying to convince Rachel that Ross is the one she is meant to end up with. She deliberately sets Rachel up on a blind date with sad-sack Steve (Jon Lovitz). Steve had originally appeared in Season 1 on a date with Monica — an occasion he showed up for stoned out of his damn mind. His life had only gone down hill in the eight seasons we hadn't seen him. (Season 9, Episode 14).

8. Chandler Ends Up On A Blind Double Date With Janice

Oh. My. God. Say what you will about Chandler and Monica, but fate really wanted Chandler to keep giving it a try with Janice. As she tells him when he breaks up with her (again) in this episode, "Something deep in your soul calls out to me like a fog horn... you want me. You need me." (Season 1, Episode 14).

9. Joey Has A Friendship Date With Janice

The idea of "Joey and Janice's Day of Fun" is simply delightful, though not for Joey. If only we could have been a fly on the wall when they went to a Mets game. (Season 3, Episode 1).

10. Joey Convinces Monica To Go On A Blind Date Without Telling Her The Whole Truth

After realizing that his ex, Angela, is dating another man, Joey concocts a plan to win her back through a double date. Except that, when he invites Monica on the double date, he tells her that she's going on a blind date with Angela's "brother" (who is actuality is her boyfriend). Awkward conversation ensues, but Monica is up for the break-up scheme because, well, her would-be date is hot. (Season 1, Episode 5).

Her name isn't Julia Roberts in the show, but that's how we all remember it. Chandler runs into a woman he teased back in elementary school (he pulled down her skirt during a play and exposed her underwear), and, to his surprise, she turned out beautiful and is willing to go on a date with him. Things take a humiliating turn for Chandler when it's revealed that the date is all an elaborate scheme she concocted to finally get revenge on him. (Season 2, Episode 13)

"Joey doesn't share food" is Joey's golden rule of dating. But that won't stop him from eating his date's food. (Season 10, Episode 9).

These classic Friends moments are not just hilarious, but also good learning experiences. After all, seeing what the Friends did wrong is all the inspiration you need not to repeat their mistakes, right?