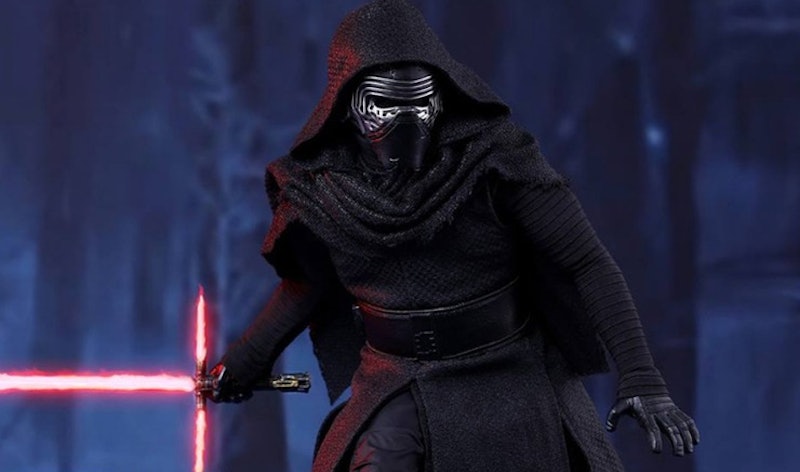 Now that we have confirmed that the title of the next Star Wars installment, Star Wars: The Last Jedi, does in fact refer to more than one Jedi, fans have been busy theorizing to whom the title refers. There are already a ton of theories on Kylo Ren and The Last Jedi, including his connections to Rey and Luke Skywalker as well as the viability of whether or not he is actually one of the last Jedi. And while Kylo Ren may have gotten pushed to the side in the hubbub of the Star Wars news, there's no reason to discount him yet.

Kylo Ren deserves some Star Wars love, does he not? He may be tangled up in some pretty nefarious plans and yes, there's a chance he might end up doing more harm than good, but Kylo has the potential to make some really interesting moves in The Last Jedi. We've already seen how bad he can be, but can he be good too? Will he succumb to the pressure put upon him by Supreme Leader Snoke and just go totally dark? Is he part of a "history repeating itself" arc and he'll end up following in the footsteps of his parents?

Here are some of the most interesting theories around Kylo Ren and The Last Jedi.

1. Kylo Ren Teams Up With His Former Enemies

How great would it be if Kylo Ren really switched things up and moved to the Light Side permanently? Talk about a plot twist.

2. Kylo Has A Mysterious Connection To Rey

Screencrush reported on an update to the bios of Kylo Ren and Rey on the Star Wars website. Attempting to draw conclusions from the addition to Kylo Ren's which refers to his connection to Rey as "mysterious," Screencrush wondered whether it confirmed what we've theorized previously (that Kylo Ren and Rey are related or perhaps are bound together by the Force) or is hinting at a bigger connection fans haven't made yet.

3. Kylo Ren Is The Only Jedi Left, As The Title Suggests

A video from Youtube user Mike Zeroh on Kylo Ren essentially posits that he is the one and only last Jedi. While Luke Skywalker will be a part of the story, Rey is simply a dupe and Kylo Ren is the one and only Jedi left standing by the time the credits roll. Again, tons of misdirects would have to be in play to make this theory work but hey, stranger things have happened in a galaxy far, far away.

A simple theory: Kylo Ren is actually just a power-hungry guy who will stop at nothing to kill Rey and Luke and may actually do it in The Last Jedi.

5. Kylo Ren Is More Important Than We Believed

A interesting theory on the Star Wars Reddit from user joedrum2345 wonders whether Kylo Ren is actually the main protagonist of the newest Star Wars trilogy and whether The Last Jedi will continue to progress Kylo's plotline more than Rey's. Could Kylo Ren actually be the hero of this entire story?

6. Kylo Ren And Rey Are Connected In A Big Way

This Reddit theory from user ZackBop posits that there were survivors from Kylo Ren's attack on the Jedi training academy. Where this gets interesting is, if you think, like me, that Kylo Ren is a bit older than Rey and we still don't know about Rey's origins, then perhaps Rey was a member of the Jedi academy. This would explain Rey's Force sensitivity, why Kylo Ren cannot readily destroy her, and would set up an interesting narrative arc around why they would be the last Jedi.

7. Kylo Ren And Rey Are Gonna Fall In Love

Listen, Star Wars is full of strange and epic love stories; remember when we thought Luke and Leia were gonna be a thing until it was revealed they were siblings? There is a total possibility that Kylo Ren is not only one of the last Jedi but he is attracted to Rey and her Force sensitivity in a literal and romantic fashion. Setting Kylo Ren up as a romantic hero would be a great redemption arc from his villain status in The Force Awakens.

8. Kylo Ren Is A Double Agent

I'll admit that the idea of Kylo Ren being a double agent would be a fantastic plot twist. He has already shown that he's not totally rotten to the core and his sensitivity to the Force means he could actually be on the Light Side. The biggest question here is: who would Kylo Ren be working for and why?

The Star Wars franchise has a tricky way of repeating old narrative arcs. The Force Awakens did this in setting up Rey's origin story to appear quite similar to Luke Skywalker's, down to their home planets consisting of dusty desert landscapes. What if Rey was the descendant of Palpatine and, as in previous installments, she was set up to fight Kylo Ren, a Skywalker by blood and a trained Jedi? Mind. Blown.

10. Kylo Ren Will Help End The Era Of Jedi Vs. Sith

PopSugar theorizes that Kylo Ren and Rey could be the last Jedi in the Jedi lineage and could end the longstanding war between the Sith and the Jedi. What if these wayward children really are are the future?

11. Kylo Could Lose His Marbles

There's a chance Kylo Ren could go completely batty in his pursuit for total galaxy domination. Or, he go lose his mind while become a pawn in Snoke's game. Either way, Kylo Ren can sometimes give the appearance of a young boy who is still susceptible to outside forces.

12. Kylo Ren Is Something Other Than Whatever We Theorized

Surprise! This is my own personal theory but something tells me that whatever we believe could actually happen to Kylo Ren in The Last Jedi, the opposite or unthinkable will happen. Kylo Ren has proven himself to be a total wild card, so it holds water that he will buck all expectations.

13. Kylo Will Just Chill In The Next Star Wars Film

Okay, so this one isn't entirely plausible but wouldn't it be lovely to imagine another galaxy delighting in the joys of garlic bread?