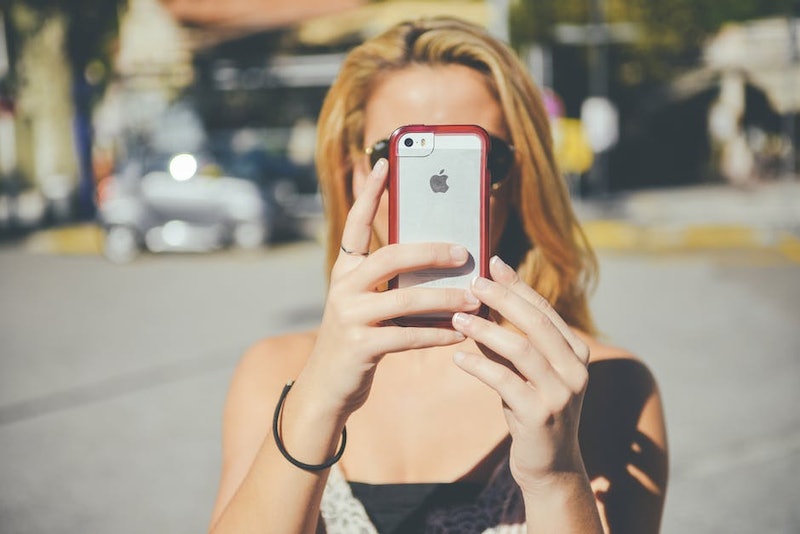 In order to have a healthy relationship, both you and your partner need to keep things as mature as possible. This means being open and honest, having face-to-face convos whenever you're upset, and keeping any and all drama far away from Facebook. If you fail to follow these basic rules, it can make for a relationship that feels immature, as well as a situation that's way more difficult than it needs to be.

That's why, when you're part of a couple, it's important to check these bad habits at the door. "An intimate relationship is going to reflect and magnify [your] immature behaviors, so it's incredibly important that you are aware of them so you can work to improve upon them," licensed therapist Dana Czachorowski, MA, LAC tells Bustle. "Going into a relationship with mature habits increases the likelihood of a successful, healthy relationship."

So be honest — do you like to fight via text? Do you snoop? Do you complain about your partner? These habits not only come off as incredibly immature, but they can truly impact the health of your relationship. Read on for some more behaviors and thought processes you might not realize are incredibly immature, as well as how to change them.

1. Doing All Your Arguing Via Text

I know, it's so tempting to unleash your thoughts via text. But, almost always, it's much better to do so in person — or at least over the phone. "In some ways, [texting] is easier and more convenient, but it can come across as immature," says Czachorowski. "When someone is consistently fighting via text, it's usually because they're resistant to addressing things head on to avoid the inevitable uncomfortable confrontation, or [they're] so emotionally activated that they can't let the issue go until they are able to speak to their partner." And neither reaction is very mature.

2. Trying To Change Your Partner

There's something very mature about entering a relationship and fully accepting your partner for who they are. (And vice versa, of course.) "We can improve in the way that we communicate with each other, how we spend quality time together, or our habits as a couple, but we're not going to change their personalities, their friendships, or their intrinsic motivation," Czachorowski says. So either accept 'em as they are, or be mature enough to move on.

3. Being Way Too Spontaneous

While spontaneity is fun and important in a relationship, too much of it can make things feel shaky and immature. "You need to establish something of a routine with your partner so that you are both establishing a life together," says author and life coach Jaya Jaya Myra. "The mind craves consistency, so the more little things you can do with or for your partner, you'll have a smoother, less turbulent relationship that you feel you can rely on."

4. Not Keeping Your Promises

If you consistently break your promises, I promise you'll come off as all sorts of flaky. And there's nothing mature about that. "Your word is your word," Myra says. "When you commit to doing something, then end up not fulfilling your obligation, it shows you're not fully ready to give your all into a committed relationship."

While you should feel free to post anything you want online, do take into consideration your motivation, as well as the privacy of your relationship. "My concern is when every aspect of the relationship ... is posted for all to see," says Czachorowski. "Social media is a part of our lives and your digital footprint is there forever. Be mindful of what you post, and avoid posting out of anger at all costs."

6. Complaining About The Same Things Over And Over Again

Part of being in a relationship is, again, accepting your partner for who they are. So if you catch yourself complaining 24/7, take note. "If you know your partner is always going to leave their socks on the floor or isn't as affectionate as you'd like them to be, your best course action is to learn how to accept and work with those behaviors," licensed clinical psychotherapist Erin Wiley, MA, LPCC tells Bustle. Complaining nonstop isn't very fun, or healthy. So either find a way to work through these issues together, or move on.

7. Shutting Down When You're Upset

Sometimes shutting down can feel like the best course of action, especially if you're having a heated or difficult convo. But keep in mind, this isn't the most mature reaction. "Shutting down during difficult discussions is a communication habit that can make you seem immature because it prevents you and your partner from moving forward through conflict," relationship expert Weena Cullins, LCMFT, tells Bustle. "It’s OK to let your partner know that you may need to take a break from a hard talk, but simply shutting down forces an abrupt end to an already stressful interaction."

A mature relationships consists of two people who are willing to apologize, even when they really don't want to. If you can't do this, Cullins tells me it can seem incredibly immature, mostly because it shows you'd rather think about your pride than the health of your relationship.

9. Not Making An Effort To Improve Yourself

While you and your SO should both be willing to accept each other's flaws, that doesn't mean you can do whatever you want in your relationship, or kick back and refuse to change. "It’s hard work to act maturely in relationships because it means we have to be humble, self-disciplined, and own our mistakes," Cullins says. And sometimes that means bettering yourself, in any way you can.

Are you someone who reads into everything? "If you constantly question whether you partner is mad at you or ask why they did certain things ... this may come across as immature," says therapist Kimberly Hershenson, LMSW. If you're truly worried about something, say so. But it's not going to make for a very grown up relationship if one or both partners is living in a constant state of fear.

11. Snooping Through Your Partner's Things

The next time you feel the need to snoop, pause and ask yourself, "Is there a better way to handle this? As Hershenson says, "Snooping around to see what your partner is up to shows a lack of trust in the relationship, which can be a big turnoff."

12. Trying To Control What They Do

The most mature thing you can do, as a couple, is give each other plenty of space to have hobbies and whatnot outside the relationship. "If you make this difficult for your partner, they may come to resent you and think twice about staying in the relationship," Hershenson says.

If your friends have a great relationship, it can be tempting to bring them up during an argument. But comparing yourselves, or trying to be like another couple, is never a good idea. "Every relationship is as unique as the individuals in it, and couples must grow to realize that what works for others may not be a good match for their relationship," says marriage coach Eric Hunt. "Besides, deep down we all realize what may appear to be perfect is usually not beyond the surface." So hey, give your relationship a break.

And, while you're at it, keep these habits in mind. While none of them come off as mature, they're also entirely unhealthy. And that's not something you want ot bring to your relationship.