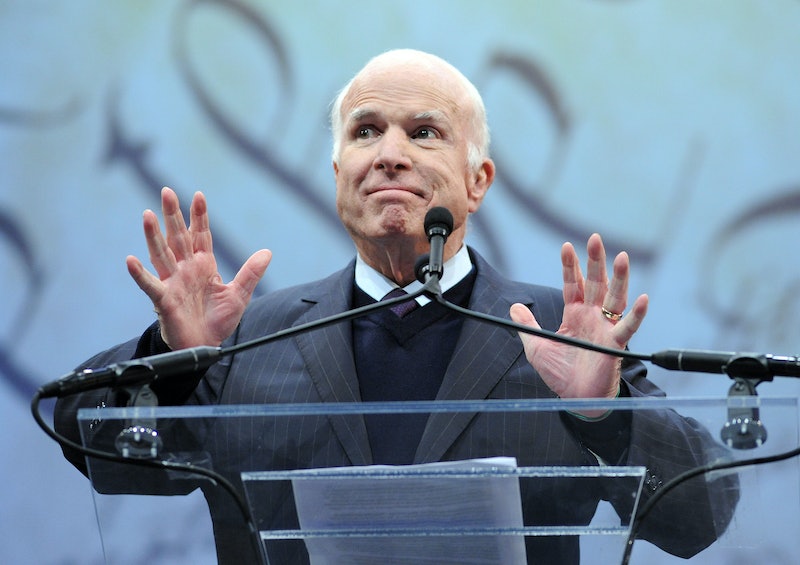 Just a day after his family announced that he would be ending his treatment for brain cancer, Sen. John McCain has died at 81. One of the longest-serving senators in Arizona's history, McCain made a name for himself with his sense of humor, his willingness to break with his party on controversial votes, and the unprecedented press access he gave reporters during his multiple runs for president. Here are some photos of McCain that show the legacy he leaves behind in Congress and beyond.

McCain was a national hero long before he was even a lawmaker. As a young Navy pilot, McCain's plane was shot down over North Vietnamese territory in 1967, and he was subsequently imprisoned by North Vietnamese forces. Although was offered early release when his captors learned that his father was a powerful Navy admiral, McCain refused to leave until the POWs who'd been captured before him were also released. As a result, he spent almost six years in a North Vietnamese prison, where he was tortured and permanently disabled.

After his release, McCain successfully ran for the House of Representatives and, four years later, the Senate. His flagship accomplishments as a lawmaker include the Bipartisan Campaign Reform Act of 2002, colloquially known as the McCain-Feingold Act, and the Detainee Treatment Act of 2005. McCain also ran twice for president, once in 2000 and once in 2008.

The Arizona Senator's career wasn't without controversy. He was a central figure in the Keating Five banking scandal in the late 1980s (though he was eventually cleared of any wrongdoing) and has regularly supported U.S. military intervention in foreign countries. McCain also drew criticism for steadfastly opposing the integration of LGBT troops into the armed services.

Nevertheless, McCain leaves behind a long, storied legacy in American politics. Here are the pictures to prove it.